Editor’s Note: The following article originally appeared on page 3 of the Great Neck Record on Thursday, May 13, 1993, written by Murray Seeman, former mayor of Great Neck Estates village. It has been transcribed for the purposes of reprint on Long Island Weekly, per the Seeman family’s request. 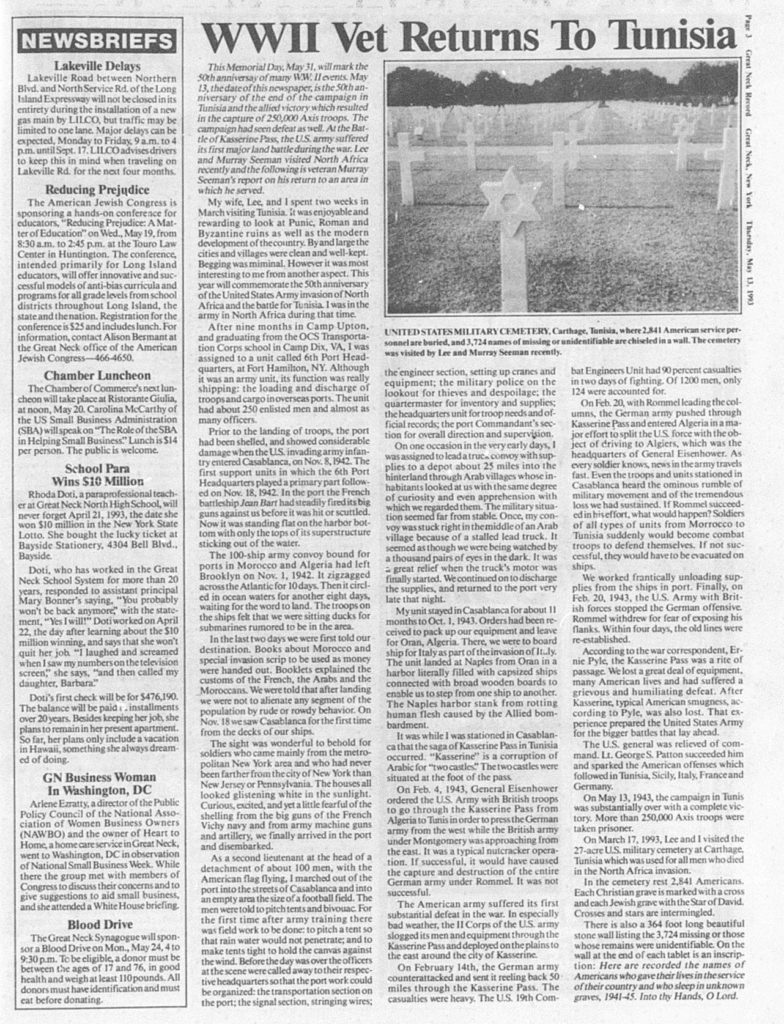 This Memorial Day, May 31, will mark the 50th anniversary of many W.W. II events. May 13, the date of this newspaper, is the 50th anniversary of the end of the campaign in Tunisia and the allied victory which resulted in the capture of 250,000 Axis troops. The campaign has seen defeat as well. At the Battle of Kasserine Pass, the U.S. army suffered its first major land battle during the war. Lee and Murray Seeman visited North Africa recently and the following is veteran Murray Seeman’s report on his return to an area in which he served.

My wife, Lee, and I spent two weeks in March visiting Tunisia. It was enjoyable and rewarding to look at Punic, Roman and Byzantine ruins as well as the modern development of the country. By the large the cities and villages were clean and well-kept. Begging was minimal. However it was most interesting to me from another aspect. This year will commemorate the 50th anniversary of the United States Army invasion of North Africa and the battle for Tunisia. I was in the army in North Africa during that time.

After nine months in Camp Upton, and graduating from the OCS Transportation Corps school in Camp Dix, VA, I was assigned to a unit called 6th Port Headquarters, at Fort Hamilton, NY. Although it was an army unit, its function was really shipping: the loading and discharge of troops and cargo in overseas ports. The unit had about 250 enlisted men and almost as many officers.

Prior to the landing of troops, the port had been shelled, and showed considerable damage when the U.S. invading army infantry entered Casablanca, on Nov. 8, 1942. The first support units in which the 6th Port Headquarters played a primary part followed on Nov. 18, 1942. In the port the French battleship Jean Bart has steadily fired its big guns against us before it was hit or scuttled. Now it was standing flat on the harbor bottom with only the tops of its superstructure sticking out of the water.

The 100-ship army convoy bound for ports in Morocco and Algeria had left Brooklyn on Nov. 1, 1942. It zigzagged across the Atlantic for 10 days. Then it circled in ocean waters for another eight days, waiting for the word to land. The troops on the ships felt that we were sitting ducks for submarines rumored to be in the area.

In the last two days we were first told our destination. Books about Morocco and special invasion scrip to be used as money were handed out. Booklets explained the customs of the French, the Arabs and the Moroccans. We were told that after landing we were not to alienate any segment of the population by rude or rowdy behavior. On Nov. 18 we saw Casablanca for the first time from the decks of our ships.

The sight was wonderful to behold for soldiers who came mainly from the metropolitan New York area and who had never been farther from the city of New York than New Jersey or Pennsylvania. The houses all looked glistening white in the sunlight. Curious, excited, and yet a little fearful of the shelling from the big guns of the French Vichy navy and from army machine guns and artillery, we finally arrived in the port and disembarked.

As a second lieutenant at the head of a detachment of about 100 men, with the American flag flying, I marched out of the port into the streets of Casablanca and into an empty area the size of a football field. The men were told to pitch tents and bivouac. For the first time after army training there was field work to be done: pitch a tent so that rain water would not penetrate; and to make tents tight to hold the canvas against the wind. Before the day was over the officers at the scene were called away to their respective headquarters so that the port work could be organized: the transportation section on the engineer section, setting up cranes and equipment the military police on the lookout for thieves and despoilage; the quartermaster for inventory and supplies; the headquarters unit for troop needs and official records; the port Commandant’s section for overall direction and supervision.

On one occasion in the very early days, I was assigned to lead a truck convoy with supplies to a depot about 25 miles into the hinterland through Arab villages whose inhabitants looked at us with the same degree of curiosity and even apprehension with which we regarded them. The military situation seemed far from stable. Once, my convoy was stuck right in the middle of an Arab village because of a stalled lead truck. It seemed as though we were being watched by a thousand pairs of eyes in the dark. It was a great relief when the truck’s motor was finally started. We continued on to discharge the supplies, and returned to the port very late that night.

My unit stayed in Casablanca for about 11 months to Oct. 1, 1943. Orders had been received to pack up our equipment and leave for Oran, Algeria. There, we were to board ship for Italy as part of the invasion of Italy. The unit landed at Naples from Oran in a harbor literally filled with capsized ships connected with broad wooden boards to enable us to step from one ship to another. The Naples harbor stank from rotting human flesh caused by the Allied bombardment.

It was while I was stationed in Casablanca that the saga of Kasserine Pass in Tunisia occurred. “Kasserine” is a corruption of Arabic for “two castles.” The two castles were situated at the foot of the pass.

On Feb. 4, 1943, General Eisenhower ordered the U.S. Army with British troops to go through the Kasserine Pass from Algeria to Tunis in order to press the German army from the west while the British army under Montgomery was approaching from the east. It was a typical nutcracker operation. If successful, it would have caused the capture and destruction of the entire German army under Rommel. It was not successful.

The American army suffered its first substantial defeat in the war. In especially bad weather, the 11 Corps of the U.S. army slogged its men and equipment through the Kasserine Pass and deployed on the plains to the east around the city of Kasserine.

On February 14th, the German army counterattacked and sent it reeling back 50 miles through the Kasserine Pass. The casualties were heavy. The U.S. 19th Combat Engineers Unit has 90 percent casualties in two days of fighting. Of 1200 men, only 124 were accounted for.

On Feb. 20, with Rommel leading the columns, the German army pushed through Kasserine Pass and entered Algeria in a major effort to split the U.S. force with the object of driving to Algiers, which was the headquarters of General Eisenhower. As every soldier knows, news in the army travels fast. Even the troops and units stationed in Casablanca heard the ominous rumble of military movement and of the tremendous loss we had sustained. If Rommel succeeded in his effort, what would happen? Soldiers of all types of units from Morocco to Tunisia suddenly would become combat troops to defend themselves. If not successful, they would have to be evacuated on ships.

We worked frantically unloading supplies from the ships in port. Finally, on Feb. 20, 1943, the U.S. Army with British forces stopped the German offensive. Rommel withdrew for fear of exposing his flanks. Within four days, the old lines were re-established.

According to the war correspondent, Ernie Pyle, the Kasserine Pass was a rite of passage. We lost a great deal of equipment, many American lives and had suffered a grievous and humiliating defeat. After Kasserine, typical American smugness, according to Pyle, was also lost. That experience prepared the United States Army for the bigger battles that lay ahead.

The U.S. general was relieved of command. Lt. George S. Patton succeeded him and sparked the American offenses which followed in Tunisia, Sicily, Italy, France and Germany.

On May 13, 1943, the campaign in Tunis was substantially over with a complete victory. More than 250,000 Axis troops were taken prisoner.

On March 17, 1993, Lee and I visited the 27-acre U.S. military cemetery at Carthage, Tunisia which was used for all men who died in the North Africa invasion.

There is also a 364 foot long beautiful stone wall listing the 3,724 missing or those whose remains were unidentifiable. On the wall at the end of each tablet is an inscription: Here are recorded the names of Americans who gave their lives in the service of their country and who sleep in unknown graves, 1941-45. Into thy Hands, O Lord.