One of the most significant revenue streams for NBA teams is the lucrative profits that come from fans plunking down money for team jerseys. And not unlike in other professional leagues, National Basketball Association owners have taken this to heart and released numerous alternate unis on the market that can be tied from everything to the military (camouflage anyone?) and Hispanic Heritage Month (Los Lakers de Los Angeles) to NASCAR (I’m looking at you Charlotte Bobcats) and even a team’s ties to a former ABA incarnation (too many to list here). To be sure, there have been plenty of crimes against style sense to parse through. These just happen to be the 10 most egregious.

1. Atlanta Hawks (1970-1972)
One of the more ancient offenders was the early 1970s Atlanta Hawks squad. Here, you see storied guard “Pistol” Pete Maravich sporting this lime green embarrassment that had a thin stripe that running vertically up the right side and turning diagonally across the upper torso before going over the left shoulder. The circle with a hawk head contained inside on the right short leg of the shorts doesn’t help matters.

2. New York Knicks (2012)
If you were recovering from an eggnog hangover, this blindingly orange ensemble sported by the Knickerbockers for a Christmas Day game may very well have had afflicted viewers racing for the bathroom. Like roaches, this ensemble has reappeared repeatedly since the 2012 season and through 2014, the team went 0-15 while wearing them. Draw your own conclusions from that stat.

3. Sacramento Kings (1994)
It’s not surprising that purple is a major component in the Kings uniform color scheme given the shade’s history of being associated with royalty. But whoever decided on this mess must have been wearing a crown three sizes too small thanks to this half black and half purple combination capped off by checkerboard panels down the ribcage and shorts, which also sported a two-tone appearance and a multi-colored waistband. 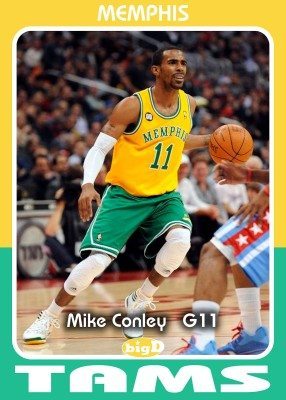 4. Memphis Tams/Grizzlies (2012)
A nod to the Memphis Grizzlies ABA predecessors, the green, white and gold combo comes as no surprise when you find out the Tams were also owned Oakland A’s/Golden Seals capo Charles O’Finley. Carrying the color combo over from his other franchises, O’Finley honored his Irish heritage by coupling the TAM acronym (Tennessee, Arkansas, Mississippi) with a tam o’shanter-style hat logo.

5. Dallas Mavericks (2001)
While owner Mark Cuban did plenty to resurrect the Dallas Mavericks, his decision to go with these shiny silver trash bags made out of Nike’s Dri-FIT material to give it a metallic vibe looked like something a future NBA exec sent back in time straight off the reject pile.

6. Miami Heat (2005-2006)
While the Miami Heat had no connection with their ABA predecessors the Miami Floridians, the former paid tribute to the latter by wearing the Floridians’ home jersey for a handful of games. This all-black uniform was topped off by a very Miami-Vice-like orange and pink stripe running down the left side.

7. Golden State Warriors (2012-present)
Sleeved shirts and pinstripes that give the appearance of soccer uniform-style pajamas—how could anyone hate on these unis, particularly if you’re planning on going to a sleepover?

8. Toronto Raptors (1997-1999)
Everyone knows that the raptors species ran around with short arms and were not particularly jacked in that department. Aside from this logo being anatomically incorrect, it’s also been paired with a purple striped jersey that we can only hope goes the way of the dodo.

9. Philadelphia 76ers (1991-1994)
This explosion of vibrant colors was not only distinguished by a swoosh of stars jumping down from the jersey to the shorts, but had then-76ers star power forward Charles Barkley describing the color scheme as looking like “…my daughter drew them with crayons.”

10.Milwaukee Bucks (1995-1999)
The ill-conceived notion of clashing purple and green on one jersey is only surpassed by this enormous deer logo that comes off looking like bad pop art.