The Shadow in the Garden: A Biographer’s Tale by James Atlas 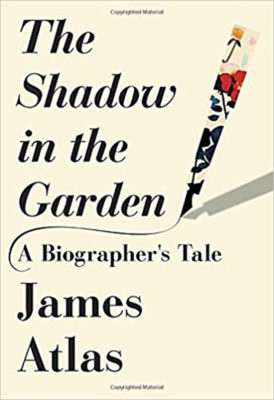 In the fall of 1975, James Atlas, a young scholar at work on a biography of the modernist poet Delmore Schwartz, caught a break. Saul Bellow would publish Humboldt’s Gift, a sprawling comic novel about the friendship between a doomed poet and a Chicago writer, whose own career was in a tailspin.

Charles Citrine was the Bellow-like character. The poet, long dead during the novel’s action period, was Von Humboldt Fleisher, a character immediately identified as being based largely on Schwartz. Humboldt’s Gift won a Pulitzer Prize. It sat on top of the best seller lists for months and, in 1976, Bellow would win the Nobel Prize for Literature. Dead for nearly a decade, Schwartz was now hot. His stories and criticism were reissued. The times were right for a biography. And when Atlas, then only 28, published his Schwartz biography in 1977, it made the coveted front page of The New York Times book review page, while also being a finalist for the National Book Award. Atlas, like Bellow, a native of “Chicagoland,” was now off on his own literary career.

After turning down a proposed biography on Edmund Wilson, Atlas eventually settled on a study of Bellow himself. There was always something inevitable about the biographer of Delmore Schwartz following up with one on Schwartz’s old friend. The Shadow in the Garden tells the history of not just those two efforts, but also the genre itself. Atlas can be a little hard on himself, the art of the biography and even his most famous subject. Atlas is an able reader of texts. (He spent years as a contributor to The New York Times Magazine.) He is also a published novelist (The Great Pretender) and that, to me, made him a perfect match for a Bellow biography. The latter was the most energetic prose stylist of his generation and Atlas’s eventual biography was written in a similarly readable and entertaining style. The man and the subject had met.

The Shadow in the Garden covers familiar ground in the history of biography: Plutarch on the lives of ancient Romans, Boswell on Dr. Johnson, Lynton Strachey on the Victorians, Leon Edel on Henry James, Richard Ellman on James Joyce, plus a chapter on Richard Holmes, whose biography of the English romantic poet, Shelley, is also considered a masterpiece. Along the way, Atlas relates the joys of biography: Research brought him into contact with a colorful array of New York and Chicago intellectuals—Alfred Kazin, Dwight Macdonald, Philip Rahv, Edward Shils and Clement Greenberg—all conjuring up the days when an essay in a “little magazine” such as Partisan Review could shape the thinking of a generation. These men spent decades in pursuit of the life of the mind: Steeped in the literature, history and philosophy of the West, they labored mightily to add refinement to the coarseness of American culture.

Retired and in most cases living in obscurity, such men, especially the irrepressible Macdonald, were glad to help the young Atlas; they both supported his efforts while offering unsparing criticism to his manuscripts in process. Chapter XIII in this book, one that recalls McDonald’s larger-than-life presence, was first published in 1983 in Vanity Fair, a reading experience that has remained evergreen to this reviewer. Years later, while working on the Bellow biography, Atlas received a book-length critique of his manuscript from Edward Shils, Bellow’s colleague from the University of Chicago and a man who had a serious falling out with the novelist.

For the Bellow biography, Atlas managed to forge a friendship with his wary subject. There was an unspoken acknowledgment that whenever Atlas finished the book, Bellow would likely have passed. Bellow was published in 2000 and the novelist was not only alive, he was plenty active, publishing a novel, Ravelstein, about his friendship with Allan Bloom, while fathering a child with his young wife, a former graduate school student. With publication, battle lines were quickly drawn. Bellow received praise in many quarters and was hailed as one of the top biographies of the year, but pro-Bellow forces also aligned against it, including a negative review in The New Republic, that was certainly the longest essay in that journal’s 102-year history. Bellow himself went on National Public Radio to criticize the book, which was a shame, since the two had formed an easy relationship. Atlas also announced that he would never again write a biography. That, too, was regrettable. Macdonald has had his biography published, but think of Kazin and Shils. These are books-in-waiting. A lesson here is that biographers who tackle a living subject do end up becoming friends with the subject, but once the book comes out, the friendship generally ends and often badly so. No biographer can write hagiography, but no living subject likes to see his warts revealed for posterity. This reviewer knows this from experience.

For Atlas, biography is a genre of real importance. A top biography, like a great poem or a novel, is a work of art destined to last for the ages. Like a great novel, it can be both a history of the times and a window into human behavior. No biography can entirely capture their subject. Still, biographies are vital, not for gossip, but to tell one improbable story after another. Those real-life stories can do more than inspire; they can literally change the life of the reader as much as any other artistic experience.

Joe Scotchie, editor of The Roslyn News, is the author of biographies on Richard M. Weaver, Thomas Wolfe and Patrick J. Buchanan.