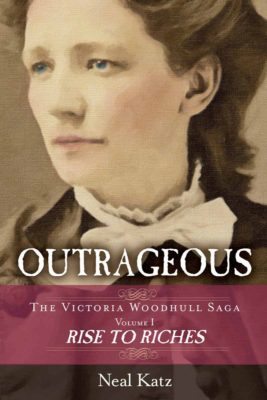 As Hillary Clinton endeavors again to earn the presidential election, one may wonder: Who was the first woman to run for president?

Victoria Claflin Woodhull was nominated in May 1872 by the Equal Rights Party, and her running mate was African-American social reformer and abolitionist Frederick Douglass. Woodhull’s most notable claim to fame is just the tip of the iceberg for a deeply rich and sometimes audacious life.

“This is especially true about our first woman presidential candidate in the U.S.,” said entrepreneur Neal Katz, author of the historical novel Outrageous: The Victoria Woodhull Saga, Volume One: Rise to Riches.

“Victoria would not let anything keep her from what she believed was her entitled destiny, notwithstanding social expectations and prevailing morality.”

Woodhull and her sister, Tennessee Celeste Claflin, became the first women both to own and operate a Wall Street brokerage firm and to publish the first women-owned newspaper. Woodhull was also the first woman invited to address a Congressional Committee.

How do the current candidates compare to the first woman U.S. presidential candidate?
“Woodhull advocated a tax on the wealthy, women suffrage, equal pay, free vocational training or higher education for women and full legal equality as emancipation from the slavery of marriage,” Katz said.

Katz stated that Woodhull’s story is important, because:

Feminism is for everyone.

Feminism matters because, ultimately, it engenders compassion, making us all better human beings. In time we will all talk about humanism, or simply caring for everyone equally. Katz is pledging 50 percent of his royalties to a foundation formed in tribute to Victoria Woodhull that will transform the lives of single mothers.

She acquired wealth as a result of the Gold Scandal of 1869, the near total failure of the U.S. economy. Understanding how exploitation of ‘free markets’ started elucidates today’s machinations.

Knowing her story enlightens how we create our own history.

Young people are grasping the importance of women empowerment, yet knowledge of early suffragettes and strong women throughout history is not equally widespread. Woodhull should be an iconic symbol for all everybody.

“Free love” meant something different in the 1870s.

Woodhull helped progress enlightened views of a woman’s sexuality by defying the regressive norms of her day. During the 19th century, women who married in the U.S. were essentially trapped if they were in a loveless or violent marriage. A husband could legally will his wife’s children away. Divorced women, however, were ostracized as scandalous. Woodhull advocated “free love” as emancipation from this unfair double standard in 19th-century marriages.

She effected change and so can we.

Woodhull’s story is about hope, overcoming adversity, and manifesting the life you want to live. Social change happens when someone defies the norm. Former Senator Barack Obama challenged conventional wisdom, disregarded preconceptions and rejected society-imposed limitations—and that’s how he became a two-term president. Woodhull was in the same spirit, because both believed in themselves and their mandate. That is how things change.

Outrageous: The Victoria Woodhull Saga, Volume One: Rise to Riches by Neal Katz is available at all major booksellers ($30). Visit www.thevictoriawoodhullsaga.com to learn more.