When Uncommon Birds Show Up

When uncommonly seen birds show up for days, it gives birders a chance to identify them and learn their behavior as well. Such sightings also may be for a scant minute so you have to move fast. 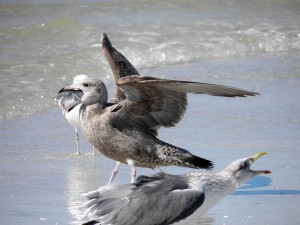 Lesser black-backed gulls are winter visitors to Florida from the Atlantic coasts of Europe, especially Britain and Iceland. They are slightly larger than the more common laughing gulls and ring-billed gulls found here but smaller than the larger and bulkier herring gulls. Their dark, charcoal gray backs, yellow bills with a red dot on the lower mandible and yellow legs, are their significant markings. Gulls loud mournful calls are synonymous with a beach’s landscape. One recent morning a call sounded that was more like a human trying to imitate a gull than an actual gull. It is loud and long and comes from the skyward tilted head of a lesser black-backed. The bird has sounded a long four-second call ending with Its head down, mouth open wide appearing to be yawning out of boredom.

The next morning in the same place at the same time, there’s another lesser black-backed with the large front end of a fish in its bill. It appears that the “snowbird” is trying  toto get a better grip on the fish to swallow it. An immature herring gull flies in fast and instantly goes after the black-backed. Gulls and terns explode into the air. Faster than I can see how, the new arrival makes off with the prize in its large bill. The aggrieved black-backed goes after the brown and white herring gull, screaming bloody murder, but to no avail. As the flurry of birds leaves, the fish is gone from the thief’s bill having been swallowed. Outraged, the black-backed takes off in pursuit of the herring gull who takes to the air. The scene is poignant. I can feel the black-back’s sense of disbelief and rage. It’s a Darwinian world out here and “snowbirds” aren’t shown any mercy.

Before, there was an adult yellow-crowned night-heron an infrequent visitor on this beach that flew. Now there’s a large dark heron on the sand which doesn’t quite look like a great blue heron in the mid-day sun. Coming back the same way a few minutes later I think I see the blue near some grasses. However the large bird isn’t a blue. The blue’s in the water with sunlight dancing around it. What’s the big bird by the grasses? It takes me a long second to believe what my eyes are telling me. This is a juvenile yellow-crowned night-heron and I’ve never seen one here.

It is covered in yellow marks that look like a splash of electric lights that didn’t miss and inch of the night-heron’s dull brown body. As big as the adult, it is hunting for crabs. The head is relatively slim as is the bill. Although the immature yellow-crowns and the immature black-crowned night-herons look very similar, I’ve no doubt that this one is a yellow-crowned. 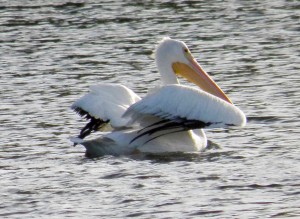 See that large amber colored eye as it walks stealthily through the tall grasses, looking, looking, stopping. I start walking by its side, a little ahead of the bird. It’s like an African birding safari. I get a number of pics of this uncommon visitor. Soon the juvenile is looking the wrong way but I want more shots. Dropping to my knees for a ground level shot I inadvertently end the photo op. The bird starts running, wings beating, mouth open, showing red, and takes to the air. In a long arching curve it heads to the water but sweeps back toward the beach at the far end.  This is the second time in a few days I’ve dropped to my knees for a shot and the second time a bird took to the air. No mås, I’ve learned my lesson.

Until a few days ago I never really noticed that white pelicans, winter visitors to Florida, resembled old fashioned Mississippi paddle boats when paddling in the water. These birds are listed as common in Florida in the winter. However I rarely see them as they prefer fresh water and I’m usually by salt water.

Over five feet in length with a nine-foot wing span, an enormous yellow/orange bill and black wing tips, the white pelican, in flight, looks majestic. An 1878 account of white pelicans in Florida, states “.. they presented the appearance of fleets of stately sailing ships under sail on the calm lagoons.”

As the sun was rising over Sarasota Bay the other morning, I glance out a glass door while stretching before I go out to see a huge bird in the water. Throwing on a shirt and grabbing my camera I walk quickly through the morning dew to a nearby dock. There are four white pelicans on the other side of the inlet. These birds are collective feeders often “herding” fish to shallow water where they surround their prey and feed on them. They should be here a while and I’d enjoy some long close-up looks at them.