When Snacking Was Extreme

As the sun was setting on the 1980s and that decade of hideous fashion and terrible music was mercifully coming to an end, the 1990s were brewing just below the surface, getting ready to unleash a radical tide of culture that was certainly all that and a bag of chips.

Beyond grunge music and flannel shirts, the ’90s bestowed upon the masses the most extreme snacks that had every been conceived. It was a glorious time of snack innovation, just before lame parent groups stuck their noses in to suck all the fun out of food with their bogus nutritional concerns.

What follows is a salute to some of the best treats that could be found in a kitchen cabinet in the 1990s—when even the package design was hella cool.

Is there anything more innately ’90s than slam dunking a cartoon kangaroo into a glob of frosting? I submit that there is not. Gifted to the masses by Betty Crocker, Dunkaroos came in chocolate and vanilla varieties throughout the decade before hopping into oblivion.

Somewhat surprisingly, these snacks held on until 2012, according to Wikipedia, though memory tells me they disappeared far earlier than that. There are currently no plans to reintroduce the snack time phenomenon to American markets, but the product can be found (a tad expired) on eBay. 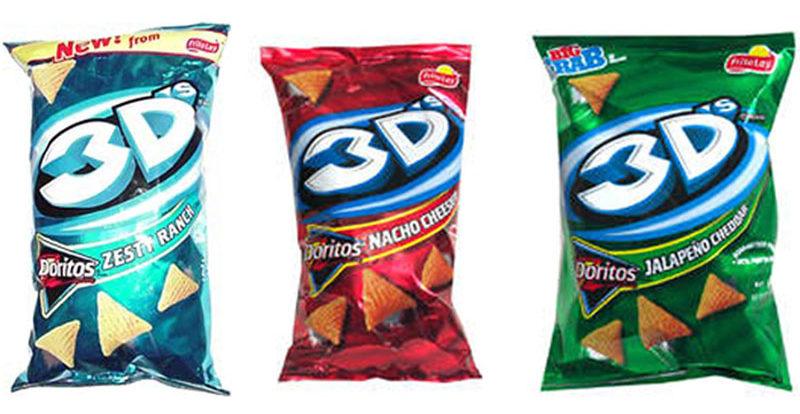 Doritos really did not need any special treatment, other than perhaps more Cool Ranch seasoning on the Cool Ranch variety. But the ’90s brought an inflated version of the tortilla chip to consumers, with the crunchy and airy confabulation capturing the appetite of teens who craved the totally extreme new horizons of three full dimensions.

Somewhat reminiscent of Bugles, these snacks crunched out of existence in the mid-2000s, when snacking culture was ready to return to merely two dimensions. 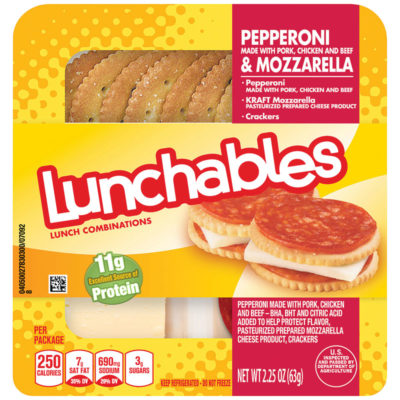 Oscar Meyer’s shrewd plan to get kids to eat more lunch meat reached its apex in the 1990s with a box of saturated fat and sodium that would surely make the less fortunate school-age denizens of the cafeteria green with envy.

Lunchables launched around 1989 and though it was basically just meat and crackers, it proved to be the must-get-treat for the coolest of kids. And in the mid-’90s, childhood obesity be damned, Lunchables offered the “Maxed Out” variety that included 40 percent more food than regular Lunchables. This one is still around today, but with much healthier options it is a shell of its former self.

The shining example of what an “extreme” beverage should be, Surge was Coca-Cola’s answer to Pepsi’s Mountain Dew drink. The greenish, yellowish, toxic-looking, vaguely citrus liquid was perfect for kids who were too cool to be seen guzzling Sprite and the package design was the visual equivalent of being punched in the face by words and colors.

Clearly America craves this hardcore drinking experience, as Surge was reintroduced into some convenience stories around 2015 and as of this year, you can find the beverage at Burger King—which is perfect as Surge pairs wonderfully with a Whopper. 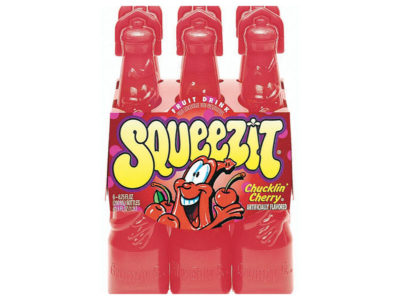 More from the neon drink department, Squeezeit was the ultimate way to shotgun sugary liquid straight to your ’90s brain. Sold in bottles featuring gnarly cartoon faces, this juice truly represents the glory of its decade as it came in flavors like “Rockin’ Red Puncher,” “Mean Green Puncher” and “Chucklin’ Cherry.”

As if that was extreme enough, some varieties came with color-changing pellets that allowed the drinker to magically change his or her beverage experience. 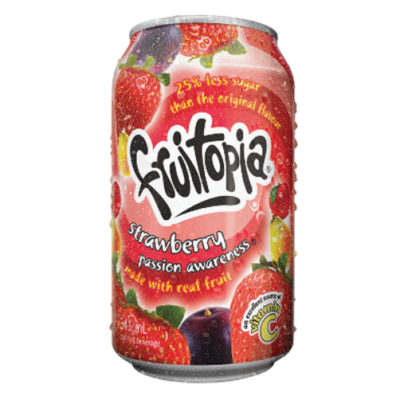 Hey man, have you ever considered that all living things are connected by an all-knowing, most-peaceful vibe and that we are all ruled by one righteous power that does not punish or judge? If so, you might have achieved beverage enlightenment, especially if you were one of the lucky ones who enjoyed Fruitopia in the ’90s. With trippy names like Citrus Consciousness, Strawberry Passion Awareness and Grape Beyond, Fruitopia quenched spiritual thirst with whimsy and wisdom—packaged and sold by mega-corporation Coca-Cola. Bogus!

“Pizza in the morning, pizza in the evening, pizza at suppertime—when pizza’s on a bagel, you can eat pizza anytime.” Such was the siren song of Bagel Bites in 1996, practically telling kids that “hey, if it’s on a bagel, eat it whenever the hell you want, you rockstar.” This snack is still alive today and with good reason, as it is one of the greatest frozen food inventions of the 1990s or any other decade for that matter.’ 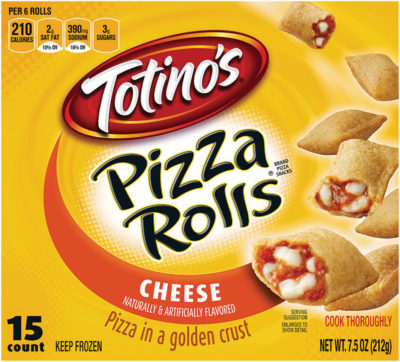 Same as Bagel Bites, Pizza Rolls exploded in popularity in the ’90s and are very much still alive today. This was perhaps the perfect afterschool treat and was best eaten while watching Bob Ross reruns in order to decompress after a particularly stressful day in class.

Cook in the oven, as these beauties transform into poisonous gross monsters if cooked in the microwave and also proceed with caution—the insides are lava hot and will irrevocably scorch your mouth.

The ’90s were loaded with sugary candy. Airheads are probably the most closely associated with the decade, along with Baby Bottle Pops and a seemingly never-ending parade of gummis, including blue sharks, blue raspberry rings, gummi hot dogs and hamburgers, and gummi peach rings. Then there’s the inexplicably popular chocolate Wonder Ball, which were filled with Sweet Tart-like candies. 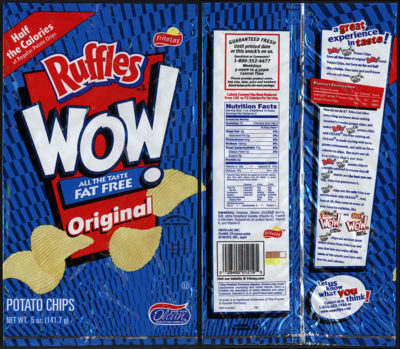 Two years after premiering, the Food and Drug Administration ruled that all bags of WOW chips must bear the warning: “This Product Contains Olestra. Olestra may cause abdominal cramping and loose stools.” A fitting end to the carefree ’90s, as well as a fitting introduction to the stool-loosening 2000s.