Review of: Draft No. 4: On the Writing Process by John McPhee

John McPhee is a longtime resident of Princeton, NJ, and a faculty member at the august university in that town. In 1964, he published A Sense of Where You Are, a book about a famous Princeton undergraduate, Bill Bradley, who would become a collegiate All-American, a star with the New York Knicks and a U.S. Senator from New Jersey. McPhee would keep writing, publishing over two dozen books. Draft No. 4 is a series of essays that amounts to a textbook on good, clear writing.

McPhee has spent decades writing for The New Yorker, the magazine that has long set the tone for prose style in publications across the United States. Indeed, “The New Yorker style” is legendary, buttressed by writers like McPhee, James Thurber, A.J. Liebling and especially such fiction writers as John Cheever, John Updike and J.D. Salinger. It also has come in for plenty of satire over the years, with those writers on the outside, such as Tom Wolfe, having much fun in ridiculing the publication’s sense of importance.

This book is not about literary politics. It includes chapters on structure, research, relations between the author and editors and publishers, word usage and accuracy—in short, that same New Yorker style. Draft No. 4 is a slim volume, only 192 pages, its main point conjures up an old Village Voice drawing that once accompanied a Richard Price essay, also on writing. In it, a hand comes darting out of the pages of a book, grabbing the reader by the collars and keeping him there. In other words, this book instructs the reader on how to get it right—from note taking to writing a good lead, to dealing with editors. This paragraph, I think, sums up its contents. 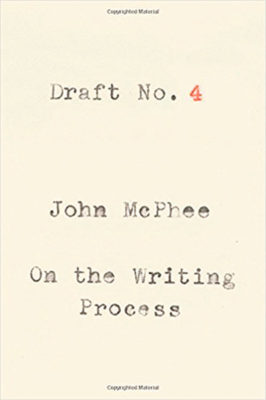 “[After] you have reviewed your notes…and thought through your material, it is difficult to frame much a structure until you write a lead. You wade around in your notes, getting nowhere. You don’t see a pattern. You don’t know what to do. So stop everything. Stop looking at the notes. Hunt through your mind for a good beginning. Then write it. Write a lead…[If] the piece is to have some combination of substance, complexity and structural juxtaposition that pays dividend, you might begin with that acceptable and workable lead and then be able to sit back with the lead in hand and think about where you are going and how you plan to get there. Writing a successful lead…can illuminate the structure problem for you and cause you to see the piece whole—you see it conceptually, in various parts, to which you then assign your materials. You find your lead, you build your structure, you are now free to write.”

McPhee was the product of a different, more learned age. Few people attended college in McPhee’s day, but those that did received a rigorous education. McPhee, in citing a Frank Bruni column in the New York Times, can be as cynical as the next guy. He notes that students at today’s Princeton can identify such names as Woody Allen, Muhammad Ali and (good enough) Winston Churchill, not to mention Sarah Palin and Paul Newman. On the blank slate list is Dr. Johnson, his famous biographer James Boswell, plus Richard Burton, Laurence Olivier and Vivien Leigh. It’s good for a chuckle, but might not the faculty at Princeton—and other elite schools—hold some responsibility for cultural illiteracy?

This is an anomaly to the subject at hand. Young people will profit immensely from Draft No. 4. It contains no frills. Instead, it is just an old-fashioned call for clear thinking and clear writing.