War Against All Puerto Ricans Author Nelson Denis To Speak

On Oct. 11, at 11 a.m., Nelson Denis, author of the new, highly acclaimed book, War Against All Puerto Ricans, will tell the story of the little-known Puerto Rican independence revolt of 1950 and its significance in Puerto Rico today
at a free talk at the Ethical Humanist Society of Long Island. The Ethical Society is located at 38 Old Country Rd., between Herricks Road and Mineola Boulevard, next to the blue water tower.
Nelson Antonio Denis is an attorney, writer, film director and former New York State assemblyman. From 1997 to 2000, he represented New York State’s 68th Assembly District, which includes East Harlem and Spanish Harlem. He was also an editorial writer at El Diario La Prensa. 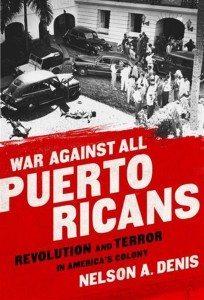 Through telling the history of Puerto Rico, Denis will shed light on the current crises of the island, where the unemployment rate is 12.6 percent and debt and cost of living are soaring. War Against All Puerto Ricans tells the story of a revolution integral to Puerto Rican history, but virtually unknown to the American public: the Puerto Rican independence revolt of 1950. After more than 50 years of military occupation and colonial rule, the Nationalist Party of Puerto Rico staged an unsuccessful armed insurrection against the United States. Violence swept through Puerto Rico. In order to suppress the uprising, the U.S. Army deployed thousands of troops and bombarded two towns, marking the first time in history that the U.S. bombed its own citizens.

In telling this shocking story, Denis traces the lives of the key figures that shaped, directed and destroyed the revolution, including Harvard-educated Pedro Albizu Campos, president of the Nationalist Party and leader of the Puerto Rican independence movement, who was eventually imprisoned and died under mysterious circumstances. It is an unflinching account of the gunfights, prison riots, political intrigue, FBI and CIA covert activity and mass hysteria that accompanied this tumultuous period in Puerto Rican history.
The book has received a rabid response in Puerto Rico, where Denis recently completed an eight-city tour.