Nothing stops the Marines, including a world-wide pandemic. Despite the region’s own battle with the coronavirus, the United States Marine Corps kicked off its annual Toys For Tots drive with the help of local business owners, top agencies, civic groups and elected officials on Tuesday, Nov. 17, at Miller’s Ale House in Levittown.

“New Yorkers are the most generous people on the planet,” said Kilbride. “A new, unwrapped toy is a symbol of hope; it’s all about hope, now especially in this pandemic.”

Opera singer Christopher Macchio opened the 2020 campaign with nothing less than a spectacular rendition of the Star Spangled Banner anthem, followed by the opening prayer from Pastor John Gravagna of Connect Church in Bellmore.

“This organization is very important; it takes care of the underpriveledged and needy, probably more so this year than in a long time,” said Major Chuck Kilbride. “For Marines, it’s all about doing for others, service to the nation, service to God, service to your family.” 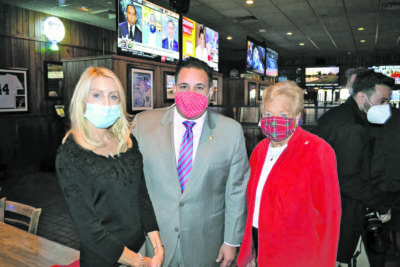 “The United States Marines Toys For Tots is among the nation’s most wholesome organizations, and their mission—to make children smile this holiday—is one that is respected and supported by all, said Vartanov. “What makes this organization is so unique is several-fold; they are our heroes, some of the bravest and most courageous among us, who are taking the time while they are not fighting abroad, to fight poverty and fight for those in need.”

Kilbride said the Toy For Tots campaign has been around since 1947, initially started to take care of World War II orphans.

“[Toys For Tots] brings out the best in people—reaching into their own pockets to give a little for others, it truly embodies what the ‘giving season’ is all about,” added Vartanov. “But, perhaps most importantly, it is unifying; we see such divide among us today, and we see people of all backgrounds, professions, ethnicities and political persuasions united to help others.” 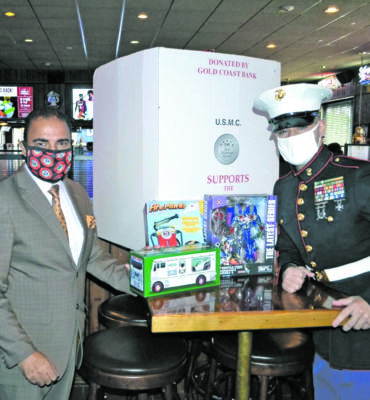 The United States Marines Toys for Tots Program is the nation’s largest holiday gift program for children. Toys from communities across Nassau and Suffolk counties will be collected by individuals, businesses and civic groups, to be distributed by Marines to local underprivileged children.

“Regardless of the pandemic and what’s going on, the Marines are here to answer the call,” said Gunnery Sergeant Sardine.