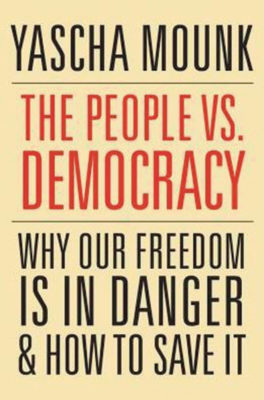 During the Cold War, the world was a simpler place. Democracy vs. Communism. Freedom vs. Totalitarianism. With the fall of the Berlin Wall, democracy won a stunning victory. That was 30 years ago. Times have changed. Democracy is not enough. It is the fate of liberal democracy that now worries both liberals and conservatives. The backlash began in Russia, where Vladimir Putin announced a model of “sovereign democracy.” Democracy was now whatever the Kremlin decided it would be. Soon came Viktor Orban, the Hungarian prime minister and his call for “illiberal democracy,” citing Singapore, China, India, Turkey and Russia as the wave of the future. The Putin and Orban regimes do hold free elections. But certain results—state censorship, barbed wire on the borders, expulsion of both non-governmental operations (NGOs) and foreign-owned universities—are hardly hallmarks of liberal society.

Yascha Mounck in The People vs. Democracy: Why Our Freedom Is in Danger and How to Save It (Harvard University Press) forcefully argues that liberal democracy needs to do some extensive soul-searching. The appearance of Bill and Hillary Clinton at then-private citizen Donald Trump’s wedding, is, for Mounck, yet another example of out-of-touch elites beholding entirely to their donors. (Trump, as a developer, contributed generously to both parties). He admits that decades of stagnant wages and mass immigration have created an implacable working-class rebellion. There is also the matter of the huge values gap between multicultural urban areas in Western Europe and North America and vast swatches of rural areas whose citizens want their local population to remain stable. Added onto that is the rise of social media, a medium easily exploited by demagogues of all stripes, but mostly on the far right. Mounck offers practical advice: Progressive taxation to stem income inequity, border security and a renewed civic faith. Mounck tells the cultural elites to stop demonizing the past, scolding them, for instance, for the repeated attacks on Thomas Jefferson. Accentuate the positive in any nation’s history. 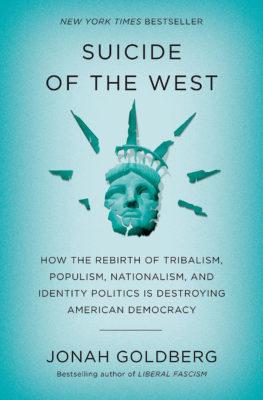 Jonah Goldberg’s Suicide of the West: How the Rebirth of Tribalism, Populism, Nationalism, and Identity Politics is Destroying American Democracy (Crown Forum) is the most ambitious of these three volumes. Goldberg is a senior editor at National Review, the biweekly with a rich intellectual pedigree of such forgotten greats as James Burnham, Russell Kirk, Richard Weaver, Frank Meyer and James Jackson Kilpatrick. Goldberg, to his credit, is an NR editor striving to match that legacy in an age of digital. Goldberg views the “economic miracle” of past centuries as history’s crowning achievement. People don’t know how good they have it! He maintains that an age of identity politics threatens to ruin it all.

The title of this opus is misleading. Suicide of the West? Goldberg, as old-fashioned conservatives will recognize, is borrowing the title of Burnham’s 1964 classic. That gripping polemic lamented the retreat of European empires, the rise of Soviet communism and the crime wave about to hit American cities. Identity politics and tribalism are one and the same. Tribalist nations within the West—Italy, Hungary, Poland, Czech Republic, the Baltic nations and outcast Russia—are all doing well: Modest growth at home, the ability to live in peace with their neighbors abroad.

Goldberg, however, is prescient about the subtitle. America’s transformation over the past half-century has not gone smoothly at all. The globalist politics of George W. Bush and Barack Obama were upended in one fell swoop by Donald Trump. Despair over the future has routed the elites’ assertions that all will turn out well. The old conservatism placed more value on traditionalism than mere economics. Goldberg is strong on these points: Private property as the basis of both freedom and prosperity, the importance of a monolithic God to keep man’s evil instincts in check and a defense of the old Pop-Mom-children family. Goldberg is not optimistic either, but taking a stand in the midst of modernity’s onslaught has always been conservatism’s most heroic virtue.

Rounding out these diagnoses is William A. Galston’s Anti-Pluralism: The Populist Threat To Liberal Democracy (Yale University Press). Pluralism and liberal democracy, the author maintains, go hand in hand. Indeed, liberal society can be highly creative, a phenomenon vital to the health of the individual and the commonweal. Again, normalcy is knocking on the door. Ralston admits that the Asian model of robust markets and authoritarian regimes may have global appeal. Is liberal democracy doomed? Can it only make a final stand in Western Europe and North America? As with Mounck, Galston believes that the elites will have to do more than just promise say, health care programs, to keep a restless populace at bay. They need to stop talking down to rural folk. Immigration reductions, also, are a reasonable compromise.

The authors are correct about virulent nationalism. Despotic at home, aggressive abroad, its legacy was the bloodiest century on record. And liberal society matters: It allows Shakespeare to be Shakespeare, Mozart to be Mozart, Tolstoy to be Tolstoy. The 21st century is now here. Do not the peoples of the West want a time of normalcy? After getting whacked on all sides by monstrous ideologies during the previous one, you can’t blame them. If liberal democracy can provide normalcy, it will flourish. If it persists in social revolution, people will look elsewhere for peace and quiet.