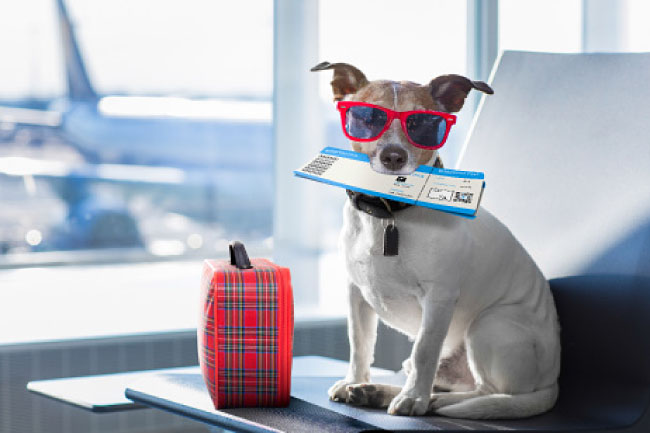 More than 68 percent of families in the United States own a pet of some sort and once you get a pet, they become part of your family. Unfortunately, when you want to take a family trip, whether flying or driving, there are more things to consider when bringing your pets.

While most airline companies allow you to travel with pets, certain companies enforce different rules. The most common way of flying with a pet is putting them in a crate with your luggage, but that’s also the worst for your pet’s health due to the harsh conditions.

Certain dog breeds are completely ruled out when it comes to traveling due to their reputation or facial structure. Dog breeds such as pugs and bulldogs cannot fly due to their brachycephalic facial structure, which is known for causing breathing problems even without flying. American Airlines restricts any dogs with purported aggressive instincts such as bullmastiffs, pit bulls, rottweilers and others.

Since cats tend to have more of a mellow personality and are usually smaller than dogs, airlines are more open to in-cabin transportation, however there are still breeds of cats that are restricted such as Persian, Burmese and Himalayan due to their brachycephalic facial structure.

Other restrictions on flying with pets are the amount allowed on the plane. On JetBlue, the company only allows a total of four pets on the plane and at the moment they are not boarding pets in cargo. However, dogs or cats cannot exceed 20 lbs combined with the weight of the carrier and do count as a carry-on item. JetBlue offers their JetPaws carrier for $50 that weighs two pounds but will keep your pet comfortable due to its plush structure. All pets must remain under the seat and in their carrier for the entire flight and you must pay a fee of $100.

American Airlines allows seven pets on the plane and must not exceed 20 pounds with the carrier in order to travel in the cabin. Any pets more than 20 pounds and up to 100 pounds must be stored in cargo. American Airlines will not allow a dog or cat to fly in cargo if the temperature outside exceeds 85 degrees and below 45 degrees. American Airlines requires a fee of $125.

United Airlines only allows a total of four pets in the cabin, however in March, United’s PetSafe partnership was suspended due to bad reviews. United Airlines, unlike other companies does allow most domesticated in-cabin sized pets on the plane such as, cats, dogs, rabbits and birds.

If you decide to fly with your pets, the most important part is to make sure it is comfortable. Make sure the carrier you purchase is airline approved and the pet has access to food and water. If your pet exceeds the weight to fly in-cabin, consider the temperature and surroundings in cargo. Usually, suitcases will slide around and can hit your pet’s cage and frighten them.

A more practical alternative to traveling with pets is by car. Traveling with your pets is not only healthier, but cheaper, too as long as you take them into the same consideration as you would with a human family member. Aside from food and water, there are differences when it comes to traveling with either a cat or a dog.

Dogs tend to like the car more than cats, because cats do not accept change as well as dogs, meaning a long car ride is not ideal for their temperament. On the bright side, there are ways to keep your cat calm for the transportation.

Since you do not have to worry about fitting a carrier under a seat, a wise move would be to get a carrier as big as possible so your cat has room to stretch and move around. Since cats can get aggressive, a smart move would be to spray their carrier bed with Feliway, a natural sedative used to reduce anxiety and stress when used correctly.

Some of those principals apply to dogs too, except dogs tend to like car rides more because they experience so many more smells and see it as a second home. However that doesn’t mean that dogs are invincible in a car.

When traveling with a dog in the car, never leave it in the car without air conditioning even if you’re stopping at a rest stop quickly and crack the window. On a 70-degree day, a car’s interior can go all the way up to 100 degrees or more in less than an hour.

Dogs can get carsick as well and anxious like cats, but there are ways to help your dog adjust to the ride, such as a comfortable crate that can be used at home and in the car.

Whether you decide to drive to your destination or fly, keep in mind that your pets rely on you to keep them healthy even when you are on vacation.