The Hiking Trails Of Long Island 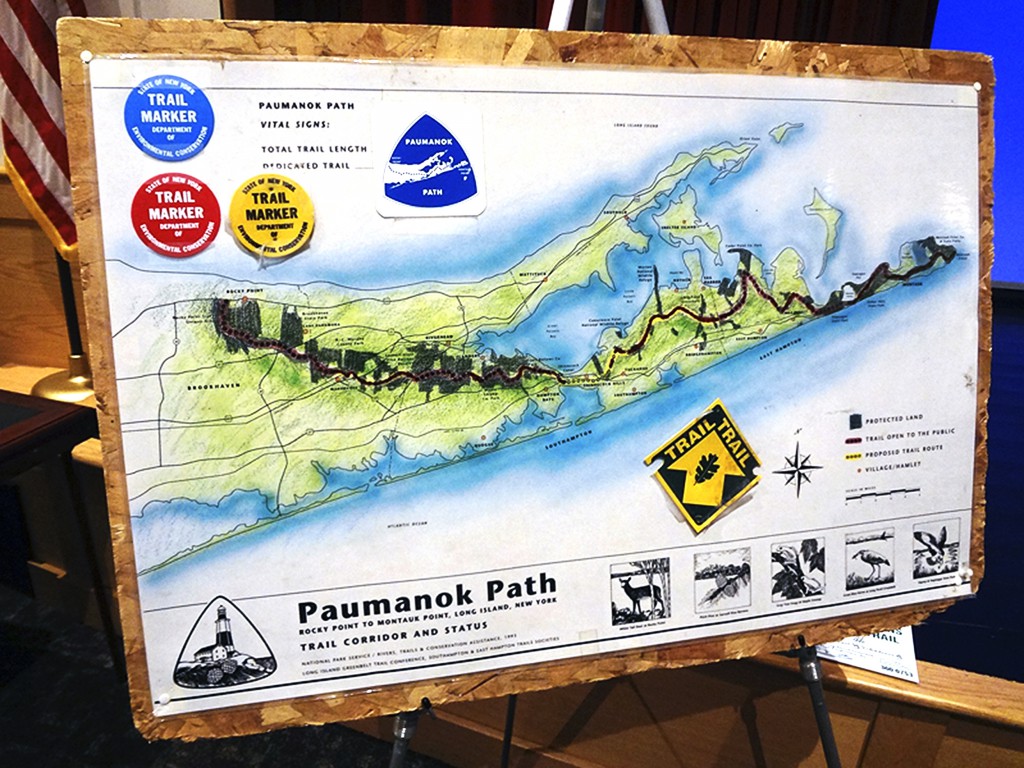 After a week filled with the rigors and hardships associated with a grueling 9-to-5 job, there’s something to be said for casting all that stress away come the weekend and communing with Mother Nature in her most pure and undiluted form; hiking one of many Long Island’s many beautiful and winding wilderness trailways.

Lee McAllister, born and raised in Plainview and currently calling Ridge home, is an insurance salesman by trade; however, he is also a devoted naturalist and author of Hiking Long Island, a book he said was inspired by his experiences growing up in the Plainview area in an altogether different era when it was considerably less developed than modern-day residents are used to.

“I’m a native of Plainview … I grew up here, graduated from Plainview High School back in 1974, and I always liked being outdoors,” he said. “When I grew up here, I walked home every day from elementary school and there were still remnants of farmhouses that we used to pass every day, and it was pretty interesting to see this area change so much over the years.”

McAllister said he started nature hiking in earnest back in his college days, mostly doing so at Bear Mountain State Park upstate at first. From there, he moved onto to exploring other areas such as the Catskills, ever seeking new and more exciting challenges. However, he said that he always enjoyed returning to the trails of his native Long Island for one very important reason.

McAllister’s side-career as a hiking book author began about 10 years ago, when he penned the best-selling Hiking the Catskills. After selling about 15,000 copies, McAllister was approached by his publisher to update the book with additional content for a re-printing; however, he said he was more interested in writing on a different, more underrated hiking area instead — Long Island. His publisher initially balked at the idea, but reluctantly went along with him based on his obvious passion for the project.

“It’s not all suburbs, despite what everyone thinks … there’s a lot of open space on Long Island and people want to know what’s out there. I told them I could really make it interesting,” he said. “In addition to covering the trails, I also wanted to include some of the philosophy of hiking — how it’s good for your head — and what makes Long Island interesting, its history and how it was formed, and the human history and its impact upon the land.”

Hiking Long Island was published in 2002 and, like its predecessor, also went on to become a best-seller; the book is currently in its third edition and now contains an extra six chapters. Among the areas of Long Island it covers are the Nassau/Suffolk Greenbelt Trail, Wellwood Preserve in Glen Cove, Muttontown Preserve in Old Brookville, Montauk Point, Orient Point, Shelter Island, and much more; and all of this trail coverage is accompanied by numerous pictures taken by the author himself as well.

McAllister notes that Hiking Long Island is filled with photographs and is written in a laid-back, conversational style that makes it easy, enjoyable reading for those interested in learning more about the great outdoors.

“It’s really easy to write a book that’s boring …’Oh, I’m going from Point A to Point B.’ But I actually talk about what it’s like to actually be on the trails,” he said. “What can you expect to see? What makes it interesting? And some of the unexpected things that can happen out there that can cause concern at the time, but that you can laugh about later on, like the time me and a few people were hiking in the winter — my favorite time to hike — and the binding on one of their snowshoes broke. We were in 4-5 feet of snow at the time, and you weren’t going anywhere without snowshoes. But after we found some spare shoelaces, lashed his boot to the snowshoe, and made it back before dark.”

“Sometimes things like that happen, and I try to put all of those experiences in my book,” McAllister added.

McAllister credits his passion for hiking and his subsequent authorship of a book on the subject to have greatly influenced his life for the better; he invites anyone interested in seeing the positive impact that hiking can have to get up, get out, and hit the many local Long Island trails available; adventure awaits, he said.

“I happened to become a naturalist, a photographer, and a bird watcher out of this, plus it keeps me in shape,” he said. “All of this enhances your hiking so much. You can just walk for exercise, sure, but if you know what’s out there and take the time to appreciate it, it can enhance not only your hiking, but your life as well.”

If you’re interested in picking up a copy of Lee McAllister’s Hiking Long Island, it is available on Amazon.com and local area booksellers.