Garbarino has hand in proposed bipartisan small business succession legislation According to a survey conducted by the Federal Reserve Bank, three out of every 10...
Read more
Home Improvement

Energy efficient windows are an important consideration for both new and existing homes. Heat gain and heat loss through windows are responsible for 25...
Read more
Arts, Music & Entertainment

Great Neck producers use BroadwayHD to bring live theater to the masses You can say that theater is in Stewart F. Lane’s blood. The proud...
Read more
TOP STORIES

Meat and potatoes are signature ingredients in Irish cuisine. And, rightfully so. The Irish Potato Famine, no doubt, was a defining moment in the country’s culinary development. Even in the poorest conditions, potatoes grew easily and became a dietary staple. With rolling pastures, much of the land was also dedicated to sheep and cows, which also became a cornerstone of the country’s meals. These conditions gave the Irish all they needed to create hearty comfort food that has stood the test of time.

As we celebrate St. Patrick’s Day, here is a look at the Emerald Isle’s most iconic dishes. 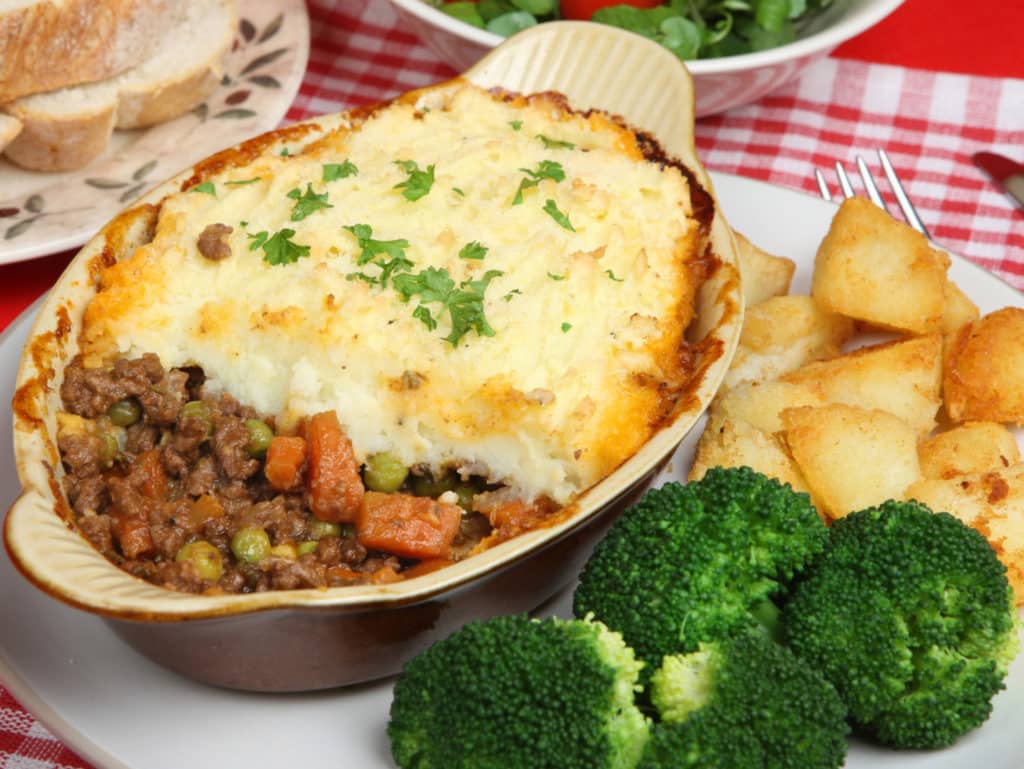 A traditional made from scratch Shepherd’s Pie is a family-pleasing go-to. A beloved Irish dish, the recipe is rumored to have been created by resourceful and frugal housewives in the early 1800s who wanted to repurpose leftovers. Though there are many variations, shepherd’s pie is defined by minced meat cooked in gravy with onions and other vegetables, such as peas and carrots. Placed in a pie dish, the rich ingredients are topped with a layer of mashed potatoes prior to being baked. Fun fact: though they are often used interchangeably there is a difference between shepherd’s pie and cottage pie. Shepherd’s Pie contains lamb, and cottage typically applies to one made with beef. 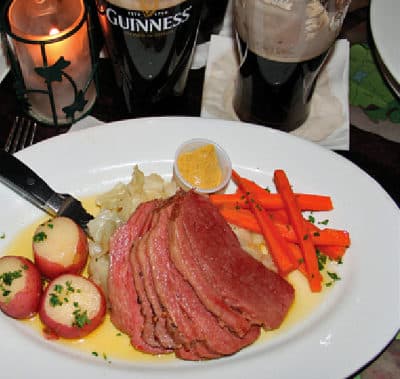 Though corned beef is technically not considered an Irish national dish, it is perhaps the meal most closely associated with St. Patrick’s Day celebrations in the United States. Corned beef, salt-cured brisket of beef, is ingrained in Irish-American culture. Its popularity spiked when Irish immigrants who came to America used corned beef and cabbage as a less expensive swap for beef and potatoes. It gets its offbeat name from the coarse salt or “corns” of salt used in the pickling process. 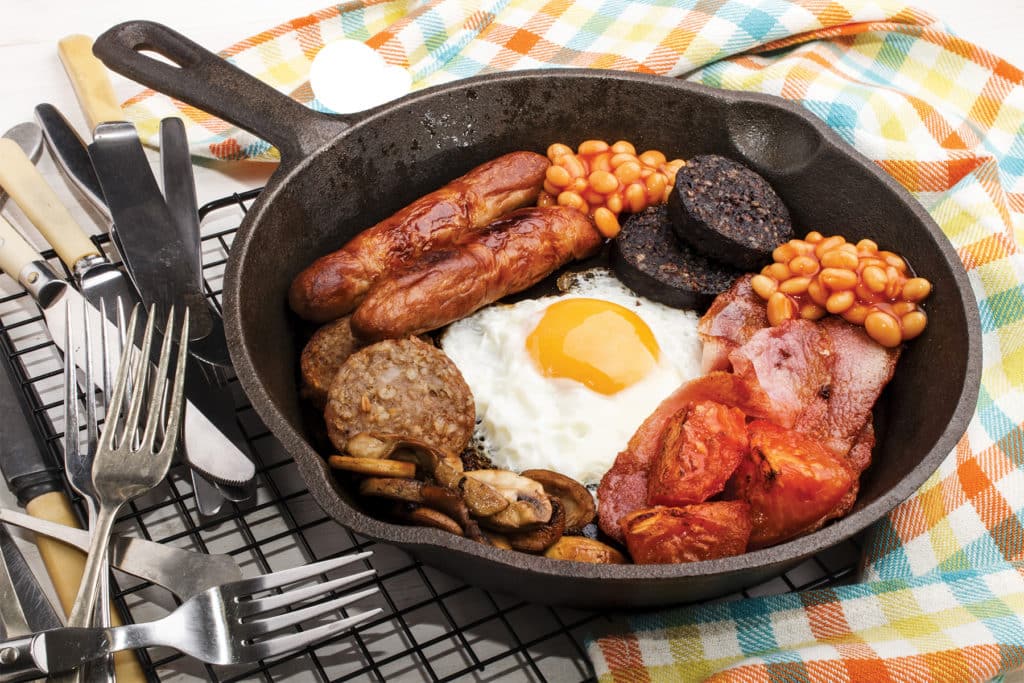 Digging into a proper full Irish breakfast ensures you won’t have to eat for the rest of the day. The hearty meal is a feast that includes bacon, sausage (aka bangers), eggs, black pudding, and hash with baked beans, mushrooms and grilled tomatoes often thrown in for good measure. Oh, and don’t forget the toast with butter and marmalade. The fried breakfast became popular in Britain and Ireland during the Victorian era, and continues to be a mainstay in the UK with many restaurants offering the meal as an “all day” option. Stateside, the dish is just as popular, especially on St. Patrick’s Day when local eateries serve it up as a special.

A Taste of the Old Country 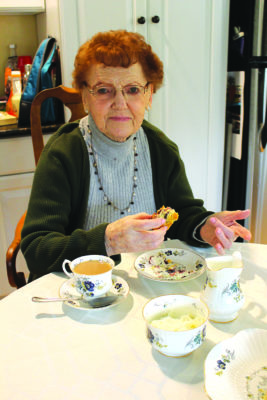 Growing up in Ireland, nothing beat a cup of tea and a slice of brown bread, right out of the range with a lump of butter melting on it. And that is what you got at my grandparents’ house in the afternoon after the bread was finished baking. What a treat! In our house my mother would often have a soda bread in the oven or even better, scones. The wonderful smell of the bread baking would permeate the whole house. We would hover around the kitchen waiting for them to come out of the oven. The kettle was on for the tea. The butter, raspberry or black currant jam, and as my dad would say, “the anti-grouch” marmalade were on the table. It was pure bliss.

What is it about these fluffy scones and that cup of Irish tea that is so special? Irish tea is way more than just a hot drink to dip your Digestive biscuit in; it is an Irish custom that serves as a symbol of hospitality and friendship. Not only is it a great way to keep warm on a rainy day, but it is comforting and has a way of bringing people together. Seldom will you go into an Irish house and not be offered a cupa tae as soon as you arrive. And if you’re lucky they will produce some freshly made scones to go with it.

But there is something special about that cup of tea in Ireland. Some say it’s the water but to me it’s all about the dairy—the creamy Irish butter and rich-tasting milk and creams produced in a country that is known for dairy farming. Ireland has some of the best dairy produced in the world. The cows are all grass fed in a climate with lots of rain producing lush green fields to graze on.

So here’s my recipe for the best Irish scones. It’s a personal one because depending on whom you ask for a recipe, the ingredients will vary. But there’s one thing we Irish will all agree on: nothing in the world is better than a hot, right-out-of-the-oven scone slathered with jam and a dollop of cream or simply with butter. And don’t forget a cupa tae to go with it. Enjoy!

CBS’ new crime drama Clarice is a deep dive into the untold personal story of FBI agent Clarice Starling as she returns to the...
Read more

Garbarino has hand in proposed bipartisan small business succession legislation According to a survey conducted by the Federal Reserve Bank, three out of every 10...
Read more

Energy efficient windows are an important consideration for both new and existing homes. Heat gain and heat loss through windows are responsible for 25...
Read more

Great Neck producers use BroadwayHD to bring live theater to the masses You can say that theater is in Stewart F. Lane’s blood. The proud...
Read more

CBS’ new crime drama Clarice is a deep dive into the untold personal story of FBI agent Clarice Starling as she returns to the...
Read more
Arts, Music & Entertainment

Great Neck producers use BroadwayHD to bring live theater to the masses You can say that theater is in Stewart F. Lane’s blood. The proud...
Read more
Arts, Music & Entertainment