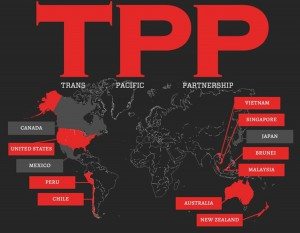 The frenzy of free trade agreements started with the 1987 Free Trade Agreement (FTA) between the U.S. and Canada. Canadian businesses gained more access to the vast American market and U.S. energy companies gained access to Canadian petroleum resources. Salaries and costs in Toronto were higher than those in Buffalo and there was a mini-boom in Western New York. But the North American Free Trade Agreement (NAFTA) and the World Trade Organization (WTO) pacts put American workers into competition with the lowest-paid labor in developing economies. It is a race we cannot win. Since 1994, New York alone has lost nearly 400,000 manufacturing jobs.
What happens in Buffalo and Baltimore and Long Island when millions of more jobs are lost under the planned Trans-Pacific Partnership (TPP)?

We’ve had 20 years of downward pressure on American wages, job losses and trade deficits. For a small percentage of Americans, it has been a boom time. Not for most.
In the first quarter of 2015, we had 0.2 percent GDP growth and all the traditional indicators flat-lining or falling in the first quarter of 2015. The recovery? We’ve recovered. This is the way it is. Because this generation never figured out what people are for, powerful forces made the decision for us. Meet TPP.

The TPP is a trade deal being negotiated between the U.S. and 11 other Pacific Rim countries in total secrecy. What the public knows comes from leaked drafts (WikiLeaks). Even members of Congress can see portions of the text only in a secure location, watched at all times. They must turn over any notes before leaving.

We know some provisions. TPP encourages international corporations to sue governments at the national, state and local level for any law and regulation that they feel diminishes their profits. That would include rules regarding pollution, food safety, worker rights, public health, land use and zoning. Claims wouldn’t be brought in public courts, but in “investor-state dispute settlement” tribunals under corporate control, with no citizen representation. Corporations, once and for all, will be made the legal equivalent of sovereign nations.

TPP requires Asian countries to adopt the worst aspects of U.S.-style patent and intellectual property rules. Pharmaceutical firms will be protected from competition, applying for extra patents (“evergreening”) to keep cheaper versions of drugs from entering the market. Hollywood, the recording industry and other media powers are ecstatic that TPP will help send people to prison for the non-commercial infringement of copyrights. Your kid can go to File Sharing Prison.
There are incentives for companies to off-shore white-collar service sector jobs (call centers, computer programming, engineering and more).

Legislation granting TPP “Fast Track” status has already flown through Senate and House committees and will be heading to floor votes presently. Fast-tracked trade agreements are presented to Congress for approval or disapproval, but allows no amendments, no improvements, no public hearings and only limited debate.

For corporations and their large stockholders, who believe they’ve hired the President and the Congress and are owed this. And also because of China, flexing its muscles with its new Asian Infrastructure Bank (and the giant floating battle stations they’re building in the South China Sea). Some think TPP will help encircle China economically. China says it’s okay with them if America wants to reduce the standard of living of its labor force.

Europeans try to keep their governments a little bit afraid of them and they’re becoming restive, disgusted by the secrecy and the disregard for democracy. Americans need to get restive, too. It’s a test of our generation.