After more than seven years, Howard Kroplick has resigned from his position as the Town of North Hempstead historian, as well as several board of trustee and director positions within the town. Kroplick notified Town Supervisor Judi Bosworth on June 3 regarding his decision to resign.

“I want to spend more time with my family and myself,” said Kroplick. “It’s time to scale back and get a better balance in life.”

Kroplick will still continue to serve as the president of the Roslyn Landmark Society and will be focusing on the restoration of the Roslyn Grist Mill, which in the coming months, will be raised to street level.

Town of North Hempstead officials, along with Bosworth, honored Kroplick on July 9, for his work throughout the town. Kroplick was given a proclamation and a historic marker with his name on it.

“We are all so grateful for your commitment to our town and its historic preservation,” said Bosworth in an email sent to Kroplick following his announcement. “You have given so generously of your time and talents. Our town and its residents have benefited greatly from your efforts. I will always be grateful to you. Wishing you happiness in your quest for a better balance.” 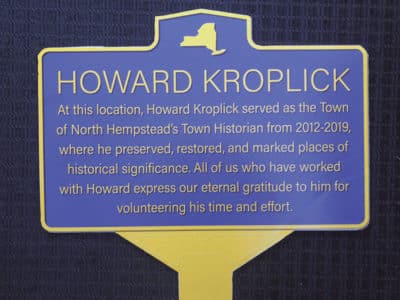 The historic marker given to Kroplick read, “At this location, Howard Kroplick served as the Town of North Hempstead’s Town Historian from 2012-19 where he preserved, restored and marked places of historical significance. All of us who have worked with Howard express our eternal gratitude to him for volunteering his time and effort.” According to Kroplick, the marker will be framed and placed in his home office.

Kroplick had worked tirelessly throughout the years to revitalize many of Roslyn’s historical buildings. The restoration of the Mackay Horse statute in Gerry Park, as well as the restoration of the various forgotten historic cemeteries, such as the Allen Cemetery in Great Neck are two accomplishments Kroplick remembers fondly.

During his time as town historian, Kroplick also worked to get the blue and yellow historic markers placed around the area. Kroplick was able to secure grants for three markers around town, the Cedermere, Montfort Cemetery in Port Washington and the Roslyn Grist Mill.

In 2014, Kroplick wrote the book Images of America: North Hempstead, which tells of the history of the North Shore of Long Island. The 128-page book is complete with more than 200 old photographs of the town, which date back to the early 1600s. This was the first book written about the Town of North Hempstead, which portrayed the town’s history, people, buildings and landmarks.

In 2016, Kroplick was awarded the Edmund J. Winslow Local Government Historian Award for Excellence by the Association of Public Historians of New York State. The award is given to one New York historian each year.

Kroplick looks forward to devoting more time to the restoration of the Roslyn Grist Mill and spending more time with his family.

“I could not have accomplished all of this without the strong support of my wife, Roz,” said Kroplick about his work throughout the years.

Previous articleCall For Artists: Back To School Special Section Cover Contest
Next articleBMW Combines The Past And Future With All-New 8 Series