I started a gratitude journal at the end of February. Around that time, I began to realize that I was focusing too much on...
Read more
TOP STORIES

Every man is put on earth condemned to eat and drink

If The Twilight Zone series taught us anything, it’s that nothing is quite as it seems—or perhaps it is exactly as it seems and what sends humans over the edge is a wild imagination. One element of the classic show that is anything but a figment of the viewer’s imagination is the dapper, late ’50s to early ’60s aesthetic. It bleeds into nearly every facet of The Twilight Zone—the sounds effects, the politics, the fashion and, of course, the food and beverages.

To eat and drink like someone from that time period—specifically, Rod Serling himself—one might simply enjoy a dry martini or smoke somewhere around five packs of cigarettes a day. But delving deeper into a cocktail party menu from that era reveals far more than one drink and a constant halo of cigarette smoke. For it is a dimension of sound, sight, mind and more deviled eggs than you can imagine.

In the days of The Twilight Zone, drinking was something men did during work hours—perhaps an early morning buzz in the office until you’re business drunk by lunch and when dinnertime arrives, a nice cold one to take the edge off and to help deal with a mouthy broad at home.

Other drinks that will get you seeing monsters on an airplane wing include Tom Collins, Brandy Alexander, Old Fashioned, Vodka Gimlet, Mint Julep and the Gibson Martini, garnished with the very-early-’60s pickled onion.

Life isn’t only cocktails and cigarettes. Staying fed while imbibing and smoking is essential to keeping the monsters off Maple Street. Cookbooks from the 1950s had an odd affinity for congealed, gelatin-encased salads that thankfully died out as better judgment arrived with the 1960s.

But one item that remained was ambrosia salad, the decadent, dessert-like version of a fruit salad. It usually contained pineapple, mandarin oranges, marshmallows, coconut and whatever else was lying around the pantry, bonded together thanks to whipped cream, sour cream or yogurt.

As mentioned earlier, deviled eggs were everywhere in the early 1960s. With a mashed and seasoned glob of yoke resting easily in the concave egg white, the deviled egg was popped into a thousand gaping, laughing, cigarette-stained mouths during that bygone era, in a display that was perhaps more disgusting than anything ever shown on The Twilight Zone. And as any good cocktail party focuses only on the priciest of ingredients, you can bet that many a deviled egg found itself topped with salty, briny, stupidly expensive caviar.

As mayo and molds were all the rage, so was liver. Chicken liver pâté made many appearances at cocktail parties, with a pop-ability rivaled only by deviled eggs. These days liver gets an unnecessary bad rap, but in the days of Serling, families regularly gorged on the organ with onions and parties usually included it in pâté form on a crunchy piece of toast.

Meanwhile, onions didn’t only hang out with liver. Thanks to the Lipton soup company, a fast and easy version of French onion dip was often the star at any snack table. Simply blend with sour cream and you and your guests are transported to France (I guess?) with a bowl of quickly disappearing chips.

One of the past’s most popular cocktail foods lives on as this writer’s personal favorite: the famed pigs in a blanket. The mighty cocktail wiener roars as soon as it is removed from the oven as hungry party freeloaders devour trays upon trays despite the dangerous of serious mouth burns. The salty, savory mystery meat of the pig married with the flaky, buttery pleasure of the blanket, this snack is eaten by the dozens especially when paired with any of the drinks mentioned earlier.

A close second to the blank pig is the Swedish meatball. Back before Ikea cornered the market on this morsel, Swedish meatballs showed off a hostess’s worldly culinary knowledge in one tiny bite. Usually swimming in rich gravy, Swedish meatballs were served most likely with a toothpick stuck in it—a great way to grab bite-sized food, but also a hazard to anyone with a habit of stuffing food in one’s pants for later.

Two other cocktail party foods come directly from the sea—salmon mousse and shrimp cocktail. By the 1960s, canned meats and fish had become a staple of the American diet. Canned salmon soon found its way directly into this whipped creation, a delight best served on a buttery Ritz cracker.

Then there’s shrimp, a creature basically created to be an appetizer. Peeled, chilled and served with cocktail sauce, shrimp cocktail is perhaps the most cocktail-related snack on this list.

The Twilight Zone era is long gone, but we can still return to that dimension thanks to reruns, food and drinks. Where will we go next? 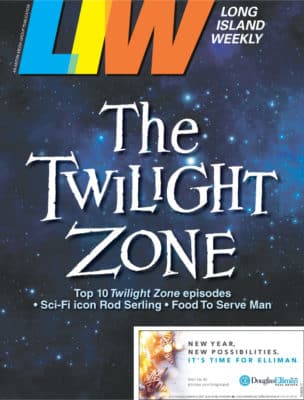