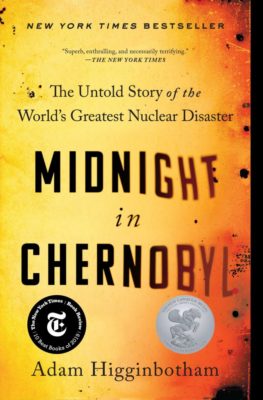 Carl Safina in Conversation with Luanne Rice
Tuesday, June 9, 6 p.m.
192 Books
Live stream only
www.paulacoopergallery-studio.com
The ability to socially learn helps species survive by allowing change to take place much more quickly than with genes alone. Ecologist Carl Safina looks at how this plays out among fauna, illuminating the experiences of sperm whales, scarlet macaws, and chimpanzees in his new book Becoming Wild: How Animal Cultures Raise Families, Create Beauty, and Achieve Peace. Find him in conversation with American novelist Luanne Rice (free).

Midnight in Chernobyl: A Conversation with the Author
Wednesday, June 10, 7 p.m.
The National Arts Club
Live stream only
www.nationalartsclub.org
In April of 1986, Reactor Number Four of the Chernobyl Atomic Energy Station exploded, triggering one of the most notorious disasters of the 20th century. The truth of the events has often been obscured, but award-winning author Adam Higginbotham gets to the bottom of it in his Midnight in Chernobyl: The Untold Story of the World’s Greatest Nuclear Disaster. Find him in conversation on Wednesday (free).

Alas, COVID-19 will not be the last challenge of its kind in our lifetimes. As antibiotic resistance increases, we have bacteria to worry about now, too. Get a jump on the next pandemic with biomedical scientist Dr. Muhammad H. Zaman, who’ll share his adventures in labs, jungles, cities, and archives preparing his new Biography of Resistance: The Epic Battle Between People and Pathogens (free).