They Served Their Country In The Shadows 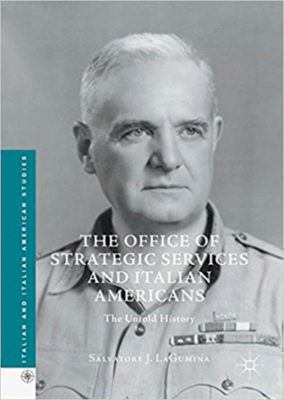 First- and second-generation Italian Americans, now associated with an enemy, found themselves the subject of hostility and suspicion in this country. However, unlike Japanese Americans (named Nisei), they were never forcibly removed and relocated to camps.

And just as the Nisei who gained the right to serve their country earned glory—the 442nd Regiment became the most decorated unit in the history of American warfare even as many of its soldiers had family in concentration camps—Americans of Italian extraction also proved their loyalty. In addition to the armed services, they would get a chance to display their duty and patriotism in America’s wartime spy agency.

Salvatore J. LaGumina, professor emeritus at Nassau County Community College and director of its Center for Italian American Studies, brings to light a virtually unknown chapter of that period.

His book The Office Of Strategic Services and Italian Americans is subtitled “The Untold Story” and details the exploits of a number of men (and a few women) whose work in the clandestine services brought them honor and distinction.

The OSS—the precursor to the CIA—was led by William Donovan (whose portrait graces the cover of LaGumina’s book) and gained fame for its intelligence and operational successes.

After a brief history of the agency’s formation, LaGumina takes us to camps in the Maryland countryside, where trainees were taught specialized skills and steeped in secrecy. He uses the words of actual participants to give first-hand accounts of the intense psychological and physical stresses of turning civilians into skilled operators who would be placed among the most dangerous and treacherous places during wartime—behind enemy lines.

At the heart of the book are several chapters detailing how the OSS used its Italian-speaking agents in various strategic spots during the Italian campaign. Starting with the invasion of Sicily in July 1943 until the German surrender in Italy on May 2, 1945, OSS operatives were crucial in gathering intelligence, partnering with the resistance and helping to hasten the defeat of the Axis powers.

Of interest to readers would be stories of bravery and ingenuity as agents—many in their early 20s—penetrated enemy areas for risky missions, aided partisans to tie down German troops, helped save Italy’s cultural heritage and induced German commanders to surrender.

Not all was glory, of course; there is an account of 15 OSS men—most from the greater New York area—who were captured and executed by the Germans. In the village of Ameglia there is a memorial to the 15, victims of a violation of the Geneva Convention for which the German commander who gave the orders was executed.

Concluded LaGumina, “They were a special breed of men and women who meritoriously validated the Italian American vital role in an important dimension of WWII, one that they earned and one that deserves to be shared.”

The Office of Strategic Services and Italian Americans is published by Palgrave McMillan. Purchase the book at www.palgrave.com.