The Survivor: Longevity The Key To Bellow’s Success

Saul Bellow’s 1970 novel, Mr. Sammler’s Planet was, from beginning to end, full of explosive imagery and observations. If there ever was a “decline of the West” novel for modern times, it more than qualifies. At the novel’s end, Artur Sammler, the elderly protagonist, contemplates the coming demise of his cousin, Elya Gruner.

“It would soon be over…As for the world, was it really about to change?…Would there be changes of heart? There would be new conduct…because we were tired of the old conduct? Why?…because the world was breaking up? Well, America, if not the world. Well, staggering, if not breaking.”

End times were not yet here. But it felt that way. Zachary Leader’s first volume of The Life of Saul Bellow followed the novelist from his scuffling days to the financial and critical triumph of his 1964 novel, Herzog. Volume II, Love And Strife continues the story of Bellow’s success, namely the winning of the Nobel Prize in 1976. There was more. Winning the Nobel Prize was not the touchstone of a career, but a springboard into more fiction—and more controversy. A Bellow character once observed that are there two kinds of novels, literature as “the tragedy or comedy of private lives” and superliterature, works “about the possible end of the world.” Such themes were fully developed in Bellow’s later career. 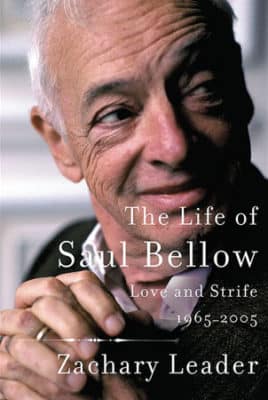 Mr. Sammler’s Planet and The Dean’s December (1982), plots aside, are reflections on moral and civilization collapse: The New York of Mr. Sammler’s Planet is humid, explosive, a carnival of crime and promiscuity; the Chicago of The Dean’s December is bleak, hopeless, indifferent. In Humboldt’s Gift, a grand comedy, the stalled author Charlie Citrine finds a second life not through a younger girlfriend but from the legacy—and literary inheritance—from a once-promising, but now long dead and forgotten poet, one based on Bellow’s old friend, Delmore Schwartz.

Bellovians will compare Leader’s achievement to James Atlas’s 2000 biography. Leader’s book often gets off track, with lengthy portraits of people at the periphery of Bellow’s life, such as the novelist Floyd Salas or a graduate student Philip Grew, whose exploits Bellow dramatized in his fiction. This thick volume can be slow going, as the author strings together quote after quote into the narrative. One gets the feeling that this book was written also to serve as a guide to future biographers seeking only to write a single volume. Atlas, himself a novelist, writes much faster.

Atlas, too, was a native of Chicago and he keenly understood Bellow’s intense relationship to his adopted hometown. This monster of a city served literally as a character in numerous novels. Chicago also allowed Bellow to be himself. New York, too, figured in several Bellow novels—The Victim (1947), Seize The Day (1956), plus the before-mentioned Mr. Sammler’s Planet. The city is almost always portrayed as hot and oppressive, violence at every turn.  Had he stayed in New York (Bellow’s residence for much of the 1950s and early 1960s), his cultural conservative would have made him a target (think of the contempt for Tom Wolfe). In Chicago, Bellow never had to make any important political or cultural stands. (In 1964, the novelist attended a City Hall ceremony with the city’s legendary mayor, Richard Daly to receive an award for Herzog. A reporter asked Daly if he had read the novel. Daly replied, “I’m looking into it.” Bellow loved relating that story on the talk show circuit.

Love and strife. The former was elusive for Bellow. The youngest of four, Bellow lost his mother at a young age, which may explain a woman-filled life. Bellow had three sons by three different wives and relationships between father and son were strained, but never fully fractured. Leader is honest with his subject. But that may not gain the deceased novelist many new readers. Why read books by a man with so many flaws?

Love finally came through for Bellow with his 1989 marriage to Janis Freedman, a Canadian graduate school student. If there is a heroine from this volume, it is the fifth Mrs. Bellow. Janis gave the elderly Bellow a daughter, allowing the man to finally enjoy family life full-time. She also nursed him through a bout of food poisoning that nearly ended his life. Longevity helped. Bellow continued to craft shorter fiction into his 70s and 80. As important, he made new friends and boosters, especially the British novelist Martin Amis and the critic James Woods, while rekindling a friendship with his contemporary, Phillip Roth.

The strife is not just family life, but Bellow’s encounters with political correctness. Mr. Sammler’s Planet earned him the enmity of major critics, similar to the fate suffered by Norman Mailer after publishing The Prisoner of Sex, his 1971 broadside against feminism. For Bellow, it got worse­­—and just on the strength of a single statement. In 1987, Bellow’s colleague at the University of Chicago, Allan Bloom, had published his best-selling critique of higher education, The Closing Of The American Mind. The New York Times sent Atlas, then a staff writer for the Sunday magazine, to write a profile. That year was also when multiculturalism with its “hey, ho, Western Civs has got to go” war cry hit shore. Atlas broached the controversy with his future subject, who joked: “Who is the Proust of the Paupans? The Tolstoy of the Zulus? I’d be glad to read him.” All hell broke loose. Bellow had angered the gods. The controversy lingered, fueled by criticism by Alfred Kazin in the latter’s latest memoir. In 1994, Bellow was forced to defend himself in a New York Times op-ed essay. “Few words by Bellow have done more to alienate liberal opinion than these or to banish his fiction from college syllabuses,” Leader asserts. Say what? Consider such a syllabus. No room for “Looking For Mr. Green” or “The Old System” or “Something to Remember Me By?” No generous samples of The Adventures of Augie March, Henderson The Rain King, Herzog or Humboldt’s Gift? It’s like excluding the works of Hawthorne, Twain or Melville, Hemingway and Faulkner. What of it? Nassau County has the top public library system in the nation. Plus, reader will always have Amazon and their trusty credit card. Down with academia! Bellow lives.