The Sultan Of Swallow

Babe Ruth’s massive success in baseball seems routine by today’s standards, as present-day players hit upwards of 50 home runs in a season without batting an eye. But for his most prolific years in the 1920s, Ruth was smacking dozens of homers while everyone else could barely crack double-digits. Obviously he must’ve had a strict diet and exercise regime to keep him in top physical shape, right?

Stories abound that Ruth mainly consumed hot dogs, beer and women during his heyday, with his exploits on and off the field becoming the stuff of legend—including Ruth’s proclivity to stuff more than 10 frankfurters into his gut and pour copious amounts of booze down his throat in between doubleheaders. Beyond ballpark fare, Ruth would reportedly eat steaks uncooked, two at a time, smothered in chili sauce. And for breakfast, Ruth was known to start his day with 18-egg omelets.

In The Life That Ruth Built, scribe Marshall Smelser broke down Ruth’s purported daily diet. Stated as such:

Cookery was not a fine art of the heavy eater; trash food, candy, hot dogs, the runs of ball-park fare was as welcome as the work of New York’s finest chefs. True, hot dogs were not main dishes but standard between-meals snacks.

He often grossly overate when strangers or new friends were with him, in order to keep alive his reputation as a greedy feaster. He seemed to think he owed such a show to the spectators.

There is at least one documented incident where The Babe’s appetite landed him in a hospital—or so that’s what the newspapers said. As the story goes, in what became known as “The Bellyache Heard Round The World,” Ruth was prepping for the 1925 season, having just signed a two-year $52,000 contract extension with the Yankees. He was with the team in Asheville, NC, when he collapsed after disembarking from a train. Newspapers initially reported that Ruth had a case of the grippe (an old-timey term for the flu), with the London Evening News reporting that The Babe had actually died. 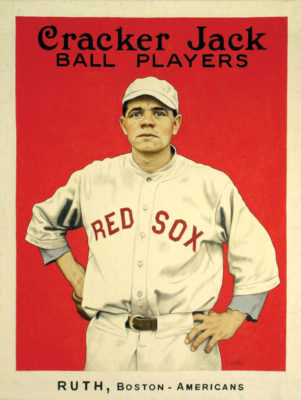 Somewhere along the way, the story morphed into the fantasy that Ruth had overindulged on soda pop and hot dogs, causing intestinal abscesses that required immediate surgery. The true nature of his malady remains unknown, but some reports speculate that the Sultan of Swat was actually suffering from gonorrhea and not indigestion or the flu. Go figure.

But as the 1920s waned into the 1930s, Ruth’s voracious lifestyle needed to be reigned in. A report in the New York Times on Dec. 24, 1932, stated that the original Bronx Bomber was on a mission to consume no more than 6,000 calories a day and to keep his weight at a slim 229 pounds prior to spring training. To achieve this, the article reported that Ruth had begun a rigorous training routine at Artie McGovern’s gymnasium where he rode a stationary bike, sparred for about eight rounds in a boxing ring and played a modified form of squash. As for this diet, the article states:

The Ruthian diet is not absolutely set day by day. Calories are counted faithfully and Ruth can go over his allotment for breakfast but he must curtail his calory consumption at dinner. This also works in reverse. Sometimes the Babe cuts down on breakfast and steps up his dinner menu.

The article then describes Ruth’s daily menu and ends by assuring the reader that Ruth is the master of his own domain:

No greasy foods are permitted and the Babe can eat pretty much as he pleases, provided he keeps within the calory limitations. Ruth has become a dietitian on his own account and has no trouble in restraining his appetite.

These days it would be unheard of for ballplayers to snack on anything other than sunflower seeds in the dugout. Luckily, fans do not have to restrain their appetites like players today or Ruth during his later years. Baseball stadiums across the country offer gourmet options from five-star chefs, allowing attendees to play out their most treasured gastro-related Babe Ruth fantasies. Chances are Ruth would indulge in various ballpark grub, but it is far more likely that he would gravitate like the planet he was to old favorites like hot dogs, deep fried potatoes, Cracker Jacks, peanuts, soda and gallons of beer.

The Ruthian Salad Days (where ironically he probably ate precisely no salad) unfortunately contributed to his premature death at the age of 53. But what a life it was, filled to the brim with more food, fun and pleasure than some people who live well into their 80s and 90s would ever experience. And baseball, it became the National Pastime, largely thanks to Babe Ruth.

It makes you wonder where the sport of baseball would be if it weren’t for hot dogs.