The Season Of Tailgating 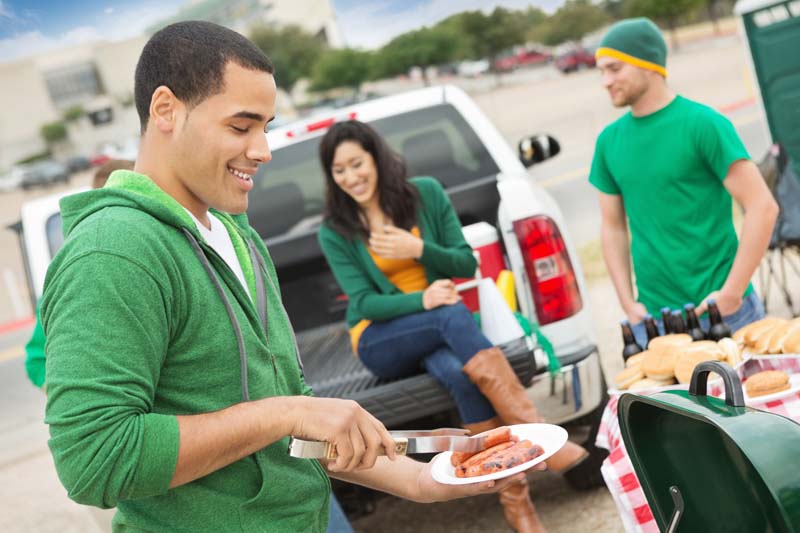 Fall means football and eating a sausage hero with a beer in your back pocket and the faint whiff of exhaust fumes in the air. Though the art of tailgating can match up with most any activity, there is something about autumn and winter mixed with consuming mass quantities of food and drink that just makes sense.

Picture it: The year is 1861 and the country is deeply embroiled in the Civil War. Battles take place everywhere, including open fields that are basically in someone’s backyard. With organized sports in its infancy, television about 100 years away and smartphones barely a gleam in anyone’s eye, boredom levels are almost incomprehensible.

What does an American do to stir up some excitement? Of course, they gather with family and friends on a grassy knoll to enjoy food and drink while rooting for soldiers fighting to the death. And so goes the first tailgating party, as legend has it, when the Battle of Bull Run prompted Union Army “fans” to travel to Virginia to congregate with picnic baskets and loudly cheer on their “team.”

Some historical reports state that the first tailgating party was undoubtedly staged by Caesar, right out of the back of a chariot inside the Roman Colosseum. But it’s far more romantic to imagine good-old American ingenuity tying together eating with a spectator sport.

As for the art of tailgating as we know it today—taking place during an actual sporting event and not a war—the most likely candidate is Ivy League football games, particularly the very first football game ever played between Rutgers and Princeton in 1869, when fans traveled by horse-drawn carriage and grilled an array of meats right up against the horse’s tail end—thus, “tailgating.”

Fast-forward a century and a half, and tailgating is immensely popular across all sporting events and plenty of events beyond sports. These beer and grilling gatherings are set off at the back of a pickup truck or out of the trunk of any car, with fans commiserating before the big game while drinking brews and eating an array of gastro items—everything from burgers to sausages to chili, with some groups even holding cooking competitions. 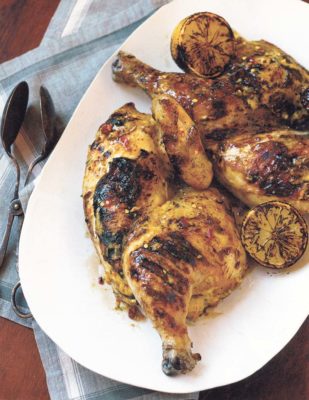 “Grilled chicken is totally ubiquitous—it’s on every menu and it’s usually no big whoop. In fact, it’s often totally boring. But this grilled chicken is so worth getting excited about,” said Burrell about her grilled chicken recipe. “It’s slathered in mustard, lemon, rosemary and spicy crushed red pepper so it just titillates your palate with flavor. Then it’s grilled until the outside is tangy, crusty and crispy while the inside stays nice and moist. To make this as super-sexy as possible, it’s served with a perfectly charred and caramelized lemon half for an extra squeeze of flavor.”

1. In a small bowl, combine the lemon zest, juice, mustard, rosemary, red pepper, garlic and a pinch of salt. Add 1 to 2 tablespoons of olive oil to the mustard mixture to loosen it slightly. Slather this mixture generously all over the chickens and let them hang out for up to 2 hours at room temperature or overnight in the fridge. (If any of the mustard mixture is left over, save it for reslathering while the chicken is cooking.)

2. Preheat the grill to medium (you want the chicken to cook on the grill as long as possible without burning to develop lovely crispy, tasty, tangy skin). Place the chicken on the grill skin side down and cook for 5 to 6 minutes. If the chicken flares up, move it to a cooler part of the grill.

3. Once the chicken has started to brown and crisp, close the grill to allow the heat to cook the chicken from all directions. Cook the chicken skin side down for a total of 10 to 12 minutes, then turn it over and cook it for another 10 to 12 minutes. If you’re using a grill pan, you can transfer the chicken to a 375° F oven when it’s ready to flip so it can finish cooking. If there is leftover mustard mixture, use it to paint the skin of the chicken on the second side. The chicken is done when an instant-read thermometer registers 165°F.

4. When the chicken is nearly done, place the lemon halves on the grill cut side down and leave them alone until brown and caramelized, 5 to 6 minutes.

5. Remove the chicken from the heat and serve with the grilled lemon for extra lemony goodness.

Football season is in full swing, meaning every Sunday until December is spoken for and a plentiful food and snack menu is at the ready. Celebrity chef and TV personality Anne Burrell knows how to get set for game day. She shares her favorite recipe for grilled chicken, tailgating tips and what makes being a spectator from the couch so much fun.

“The thing I love most about football season is tailgating. I love sports in general and all the fun stuff that goes around sports, football and sweater weather when it starts to get a little chilly. It’s such a happy time of year,” said Burrell. “Everyone has come back from the summer and come together in the fall and spends their Sunday funday football day together.”

The chef knows that tailgating, while a fun time, is an art, and how to master order and efficiently is important to keep hungry fans pleased.

“If you’re in charge of cooking, do your prep work at home so you can just get there and unpack and start to cook immediately; it just makes things that much easier,” said Burrell of planning ahead. “Make sure things are easily eatable. I recommend things that can go in bread, like sandwiches or wrapped in tortillas or something that can be easily eaten out of your hand. And make sure you bring lots of napkins.”

As a sports fan, the chef loves to munch on hot dogs, a sausage or meatball sandwich, or pretty much anything on bread. Don’t we all?

“I am a sandwich kind of girl during the game,” she said, adding that as a true New Yorker, Burrell will be rooting for the Giants or the Jets. And we doubt she’d say no to her delicious grilled chicken recipe either. “It’s an elevated grilled chicken, but it is still grocery store ingredients. Plus, it is super yummy and great for tailgating.”

Whip up Anne Burrell’s savory chicken recipe for your next tailgating event and elevate your game day menu this season. Who knows, it could become a staple dinner dish in your home.