The Rise And Fall Of The United States Football League

The most popular night to celebrate music looks like it might have to wait a little bit longer. It was just announced that due...
Read more
News 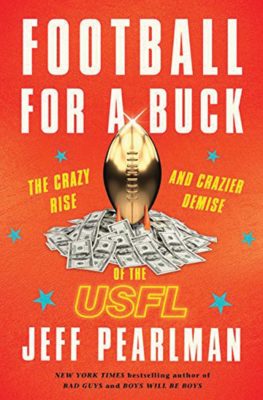 In the 1980s, the National Football League was thriving, becoming the best sports league in the country with a strong grip on television rights and the fall season. However, there were people who thought they could compete with the “shield.” Enter the United States Football League, a spring/summer league that aimed to pull in viewers while the NFL was in its offseason. What blossomed was a league that revolutionized football as we know it today. Unfortunately, it crashed and burned over a lawsuit that paid out only spare change.

But in his new book, Football for a Buck: The Crazy Rise and Crazier Demise of the USFL, New York Times bestselling author Jeff Pearlman brings to life everything people loved about the now defunct league and more. After nearly 430 interviews in about a year’s time, he gives us a behind-the-scenes look into an organization that was among the more popular football organizations to compete with the mighty NFL.

“I feel like a lot of what drives me to topics is nostalgia,” said Pearlman. “I’ve written about the ’80s Mets, Walter Payton, ’90s Cowboys. Those are teams I feel nostalgic for. But there’s nothing that I feel more nostalgic for than the USFL. I look back at that time very fondly but also morosely because it came and went so quickly.”

The league was around from 1983 to 1985, and it was a version of football that was more exciting than what the NFL had to offer at the time. The USFL reached its peak in 1984, when 18 teams competed and a bunch of future NFL stars were at the center of the newer league, from quarterbacks Steve Young and Jim Kelly, to running back Herschel Walker, to defensive monster Reggie White.

“People liked that it was daring and explosive,” said Pearlman. “They were doing things the NFL wasn’t. At the time, the NFL was very button-up. They didn’t want players getting too big. They didn’t want to build celebrities out of football. But the USFL was just dynamo. ‘Who do you want to talk to?’ ‘What do you want to see?’ They did a bunch of promotional experiments.”

They tried different ways to play the game, such as introducing the two-point conversion after a touchdown or the installation of instant replay for officials. What made the book so fun to write, however, was the chaos outside of the lines.

“I’ve never been more surprised by a book I wrote,” said Pearlman. “There are millions of crazy, insane characters. The book is, in a way, an ode to the ’80s. Like the star wide receiver of the Houston Gamblers smoking a joint before every game. The defensive lineman of the Los Angeles Express getting cut and punching the coach in the face. Fights on airplanes, hookers showing up with business cards. It was such a weird time period.”

Despite its success, the league faced financial struggles and were having trouble keeping teams alive in their markets. Fortunes seemed to look up when the new owner of the New Jersey Generals arrived: New York business mogul Donald Trump.

“Donald Trump came along, bought the New Jersey Generals, and told the owners ‘I know how we can make money immediately. We need to move to the fall,’” said Pearlman.

Throw in the idea of suing the NFL for antitrust laws and Trump became the face of the USFL’s downfall. After the move to autumn failed and the lawsuit paid out only $3.76, the league folded under the debt it built upon itself. Thirty years later, Trump would announce his run for the U.S. presidency, and Pearlman found it all too familiar.

“The bombast, the promises, the guarantees, the arrogance and the I-know-best [personality]. That was him back then and playbook is exactly the same [now],” said Pearlman. “He entered the USFL making promises of greatness, ‘It’ll be so easy getting a fall TV deal. So easy!’ There are a lot of chilling comparisons.”

But the league was so much more than its downfall, as the book notes. Its legacy is still felt today as both two-point conversions and instant replays were implemented into the NFL after the USFL collapsed. Places that had USFL teams such as Jacksonville and Tennessee were later home to NFL teams. And thanks to the idea of a rival league stealing players, the NFL’s salary cap grew to new heights to convince players to take more money to stay. Overall, the NFL became a little bit more fun thanks to the USFL’s existence.

As for the book, Pearlman is proud of the work he put into this biography and is excited to share Football for a Buck, which is available in stores now, with the world.

“It’s the most fun I’ve ever had writing a book,” said Pearlman. “It’s really bouncy. The only heaviness of this story is that Donald Trump ruined the league. The fun of it is there is a lot of drugs, craziness and wild characters. It was just fun to write and report throughout. [It was] nonstop really enjoyable.”