The Return Of The Galloping Ghost 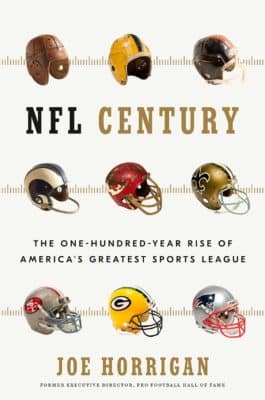 Who remembers Red Grange today? The former Chicago Bears running back was part of the Golden Age of Sports in the 1920s, a roster that included Babe Ruth, Bill Tilden and Jack Dempsey. Prior to Grange signing with the Bears in 1925, the league was very much a Midwestern thing, with most teams from football-crazy Ohio. With Grange, attendance rocketed to stadium capacity: a 10,000-fan crowd became a 70,000 one. During the Depression attendance fell, but picked back up again in the postwar era. Without Grange, pro football might not have survived the 1920s.

Joe Horrigan’s NFL Century: The One-Hundred-Year Rise of America’s Greatest Sport League isn’t the authorized history of the game, but it comes close. Horrigan is former executive director of the Hall of Fame in Canton. He doesn’t whitewash the past, revisiting controversies regarding labor negotiations and Pete Rozelle’s decision to play a full slate of games the weekend following President John F. Kennedy’s assassination on Nov. 22, 1963. The glaring omission is the Colin Kaepernick-inspired kneeling by players during the National Anthem. The league took a hit in attendance and television ratings and some franchises have yet to recover. Horrigan’s book is brisk and thorough. This is sports, after all, and the man has fun.

How did the Super Bowl get its name? The original name was the NFL-AFL Championship Game. Zzzzz. Lamar Hunt, owner of the Kansas City Chiefs, had a daughter who played with a “super ball,” a rubber ball that would bounce sky-high once it hit the pavement. Try Super Bowl instead, Hunt counseled.

Horrigan walks the reader through great games: the 1958 nationally televised sudden-death championship game between the New York Giants and the Baltimore Colts; the 73-0 blowout of the Washington Redskins by the Chicago Bears in the 1940 contest, a game where the “T” formation was first used; and the 1969 upset of the Colts by the New York Jets in Super Bowl III. In addition, there are all the great dynasties: the Chicago Bears, Cleveland Browns, Green Bay Packers, Pittsburgh Steelers, Dallas Cowboys, Miami Dolphins, San Francisco 49ers and New England Patriots. The biggest omission here is no mention of the Dec. 31, 1967 “Ice Bowl” NFL championship game between the Packers and the Cowboys, complete with Bart Starr’s fourth-quarter comeback drive in 15 degree-below weather. That game, to me, ranks third to the 1958 and 1940 title games.

Red Grange was the player who made the league, but Rozelle was the commissioner whose tenure, with television contracts and the successful AFL-NFL merger, was decisive in the league’s rise to National Pastime status. He is the league’s Man of the Century. 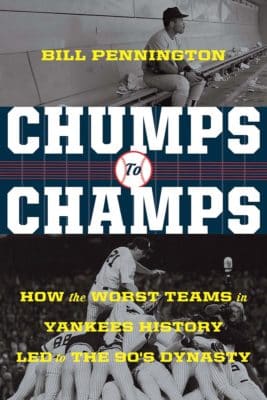 Even though the New York Yankees fell short again this year, the team is back as a pennant contender for years to come. To soothe their disappointment, fans may want to relive the years prior to the glory days of the late 1990s, when the team was among the worst in the game. The Yankees went into the 1988 season with great promise; the lineup included Rickey Henderson, Don Mattingly, Dave Winfield, Jack Clark and Mike Pagliarulo. The Bombers, however, didn’t have the pitching and the team failed to win the division. George Steinbrenner promptly broke up the squad, trading Henderson, Winfield, Clark, Pagliarulo and Rick Rhoden and getting virtually nothing in return. In 1990, Steinbrenner was suspended. The man had turned the Yankees into a revolving door of players, managers, pitching coaches and hitting coaches. Even Yankee haters felt sorry for Yankee fans. But Steinbrenner, as Bill Pennington relates in From Chumps to Champs: How the Worst Teams in Yankees History Led to the ’90s Dynasty, also saw talent in Gene Michael, a former Yankee shortstop turned manager and general manager.

In Steinbrenner’s absence, Michael and skipper Buck Showalter (Steinbrenner’s, not Michael’s, 1992 choice for manager) rebuilt the team. A key trade which landed Paul O’Neill from Cincinnati for Roberto Kelly was vital; more important was the farm system. A talented team of scouts assembled a crop of younger talent that included Derek Jeter, Jorge Posada, Andy Pettitte, Bernie Williams and Mariano Rivera. The turning point came in 1995 when Rivera, who was on the trading bloc, saw his fastball jump, overnight, from 90 to 95 mph. The Yankees now had a closer who would dominate the game for years. What caused that change in velocity? Rivera was a devout man who read the Bible regularly. Some people have speculated divine intercession and that guess is as good as anyone’s. But we all know that he went down as the greatest closer in MLB history.