The Moods of November 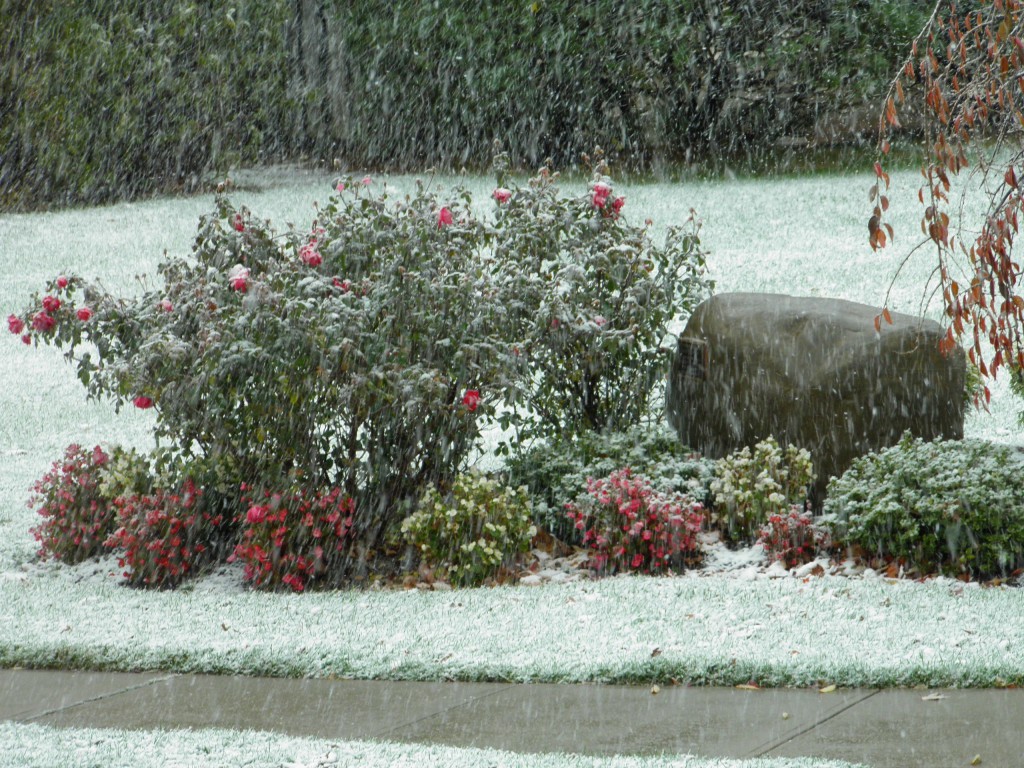 November’s moods start with honey, red, yellow and wine colored leaves and ends with trees almost as bare as a Thanksgiving turkey carcass. However this year it had a

different ending a few days into December at a wildlife preserve in South Florida.

At a Hess station on Rt.110 under a cloudy sky in late afternoon’s waning light, thirty starlings are breaking to a slow halt as they land on a tree with dried, brown leaves. Their short pointed wings pull back offering a view that I don’t often see. Below and in back are the double OOs of an orange neon Hooters sign. This is the moment between day and evening when these birds may start to sing and call. It’s only November 11th but in a week my wife and I will be going to Longboat Key on Florida’s West coast.  I’d like to see these starlings mass before we leave.

At 8:00 AM the next morning I look out the window to see a thin sprinkling of snow showers. The snow is melting in the street but sticking to the grass.  At first the showers are light but fall steadily for two hours covering most of the grass like sprinkled sugar. When the showers end the only notable green is the ground directly beneath trees whose limbs shield it. While the snow is accumulating, red and wine colored flowers, remnants of summer, make the scene Christmas-like.

At dawn the day we leave for Florida, the street is wet from the overnight rain and a carpet of leaves has fallen covering out patio and the street. Acorns seemingly are everywhere. Dried brown leaves still hang on until they one by one surrender to winter’s bare limbs by the month’s end. But at the moment they look bright. Later I hear two high-pitched loud calls coming from a pine tree by our patio fence. Looking up I get a sprinkling of tiny pine cone needles on my face. I call back and a tiny black-capped chickadee comes to the end of a branch to see what the annoyance is. The little guy’s black head and white breast are momentarily visible before it retreats to scour the branches for insects.

The next morning on the beach across from us is my first bird, a flying Forster’s tern. I can see it’s black “arrowhead” eye-patch. How ya doin’ guy! There’s a great blue heron trolling the water.  This one is walking in very shallow water with its long neck stretched out to the right, while its head and javelin-like bill face left. The blue turns its gaze directly on me. No problem here and it continues its search for prey. Sanderlings, small chunky sandpipers, perhaps the most faithful of the birds here, are scurrying after waves pecking in the sand for aquatic morsels. A squadron of brown pelicans, the poster bird for The Gulf Oil Spill of 2010 are in the sky flying in a respectable V formation. I love watching them having come back from being caked in bronze oil.

I can hardly believe it! the Beggar and the Host are here also. It usually takes me days, if not weeks to see them. This is a special duo of royal terns, that I only see here. Royal terns are big at 20-inches, have large yellow orange bills and a calm disposition. The Beggar, which I first noticed several years ago, has a permanently bent posture and looks up at another royal in a supplicating or begging position. Its bill is constantly open and closing as it emits hi-pitched calls seemingly begging for food. The Host imperiously ignores the Beggar or walks away only to be followed and harangued more. This goes on continuously. Frankly, I’ve no idea how the Host can stand it without going insane.

Walking down the beach I see movement on the sand. This isn’t a bird but a fast moving pale form that usually disappears into a hole leaving a viewer wondering if they saw something. Appropriately this eight-legged round form with two pincers and two Martian-like round black eyes that stick up like search lights, is called a ghost crab. They have holes all over to escapes predators and the heat. This one just stops allowing me a look at it. It seems to make itself a bit smaller. Nice trick.

In the clear, shallow of the water breaking on shore is a lone fish with wide black stripes that run along its body. This is a common fish called a sheepshead porgy. They like shallow water and make a nice meal for ospreys. It wiggles forward and goes out to deeper water.

Can You Believe It?

The day before Thanksgiving I see a starling sight that rivals anything I’ve seen in New York. We are driving along a two lane road, across from a golf course, where sometimes starlings mass on power lines. Today’s one of those days. The starlings are massed side by side, black forms against a gray sky. The line of them is so long that there’s standing room only. There’s a black swirl of starlings moving counter clockwise near the power lines. I don’t know if they are flying away, waiting for some space or just having fun. I guesstimate that there are at least three hundred starlings, probably more.

On the first Saturday in December in Felt’s Preserve in Palmetto Florida. We’ve just seen a great-horned owl, a red-shouldered hawk, a female cardinal and some butterflies. Scanning the trees I notice an interesting brown butterfly twirling toward us. As it gets close to the ground, someone points out it’s a leaf. In sunny humid, South Florida, it’s sometimes hard to tell what season it is.