Sprezzatura is a philosophy that drives Scott Conant. The Italian word means the art of nonchalance and applies to the chef for making sophisticated elegance look effortless. When Food & Wine Magazine named Conant to its “Best New Chef” list in 2004, the world began to take note. Thirteen years later, Conant is recognizable as a chef, restaurateur and cookbook author, as well as a beloved television personality on several Food Network shows. But before he became a successful chef, Conant began where many others do: washing dishes.

“In my hometown of Waterbury, CT, I was a dishwasher at a family friend’s restaurant. The first time I walked into a restaurant kitchen, I fell in love,” says Conant. “It was like walking onto a team. I could have been playing for the Yankees at that point, it didn’t matter. Just to have the camaraderie and sense of teamwork.”

Although he was in the kitchen at a young age with his family, Conant began making a name for himself when he moved to New York City 27 years ago and worked for San Domenico. The restaurant had just opened and Conant had never seen Italian food presented in such a way. 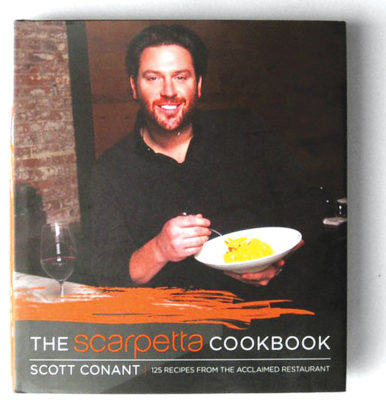 “It was very fancy. That’s where I was really introduced to white truffles and super high-end caviars that I didn’t necessarily associate with Italian food,” says Conant, aware that at the time, Felidia in Manhattan and Valentine in Los Angeles were the high-end Italian restaurants in the country. “You look around now and see how much has changed.

Disciples of those chefs have opened up their own restaurants. There’s these casual restaurants that use sophisticated, luxurious ingredients, so I feel like education of Italian food has changed. Nobody was making agnolotti 12 to 15 years ago but now you’d be hard-pressed not to find them on restaurant menus.”

In Conant’s view, the culinary landscape may have changed—even French restaurants are utilizing Italian ingredients and commodities—but the importance of pasta as a staple dish will never go out of style. Known as the Maestro of Pasta, Conant’s fresh varieties of pasta are mainstays on his menus, and he continues to elevate the simple mixture of flour, salt and egg.

“I started cooking pasta years ago and I got good at it. I like creating layers of flavors and the textures involved. I like how interesting it could become,” he said.

While it may seem like a simple dish to make, cooking pasta has led many at-home chefs to make mistakes the minute they boil water without salting it, a move Conant can’t understand.

“It should taste like broth. It’s a low-hanging fruit so to speak,” he said of the common kitchen error. “Another is being able to cook the pasta directly in the sauce…80 to 90 percent of the way in salted water and finishing in the sauce together. That will allow the pasta to cook right, but absorb the liquid from the sauce, releasing the starch and creating great texture.”

With so many years of experience, it’s only right that Conant allows himself to make things up as he goes along. He shares that his style of food is a combination of inspiration from many people, but also the ability to create his own food and speak his own language.

“I look at what a lot of people do, and I have a tremendous amount of respect for it,” said Conant, attributing his personal series of successes to someone who is always working on the bigger picture. “I worked hard to be recognizable but I think that TV and advertising platforms hopefully get people in the seats of the restaurant—but the celebrity aspect, that’s not my motivation. That started years ago, the Wolfgang Pucks of the world and celebrity chefs. That’s not a new phenomenon by any means.”

Conant has his hand in many ventures. Over the years he has published three cookbooks, Scott Conant’s New Italian Cooking (2005), Bold Italian (2008) and The Scarpetta Cookbook (2013). While he considers himself a cook first, he is also an entrepreneur whose wealth of knowledge has been beneficial for aspiring and up-and-coming chefs as well. His star on the Food Network walk of fame has served him well as a judge on Chopped and multiple other shows.

“I had to figure out how to be self-critical, and I really feel like I can help chefs be better. That was my main reason when I started doing Chopped,” he says. “Frankly, I’ll call BS when their egos get out of whack. I’m quick to point that out; that’s what they need to hear in order to learn and grow.”

Keep up with Conant by visiting www.scottconant.com.