New York Rangers fans haven’t had much to cheer in recent years. The past two seasons, the Broadway Blues missed the playoffs, the last post-season series found them losing in the second round to the Ottawa Senators in 2016-17 and the last sniff at Lord Stanley’s Cup came when they fell to the Los Angeles Kings in 2013-14. For the Rangers faithful of all ages, the 1993-94 campaign, in which the franchise broke a 54-year championship drought and finally got to hoist the Stanley Cup, holds a rightfully special place in the heart of the fan base. And while no one who bleeds Rangers blue would disagree with that sentiment, for authors Mark Rosenman and Howie Karpin, the 1978-79 Rangers are a team that shouldn’t be overlooked, despite the fact that it fell to a Montreal Canadians juggernaut that was on its way to winning its fourth consecutive Cup. Despite the outcome, Rosenman and Karpin felt strongly enough about giving this crew their due that they published Before 94: The Story of the 1978-79 New York Rangers.

“Howie [Karpin] and I have been sitting next to each other at Madison Square Garden for pretty much ever Rangers game. We had written three books prior and we enjoyed the process. At one point, I turned to him and said my favorite team of all time is that ’78 to ’79 Rangers team and we should do something about them,” Rosenman explained. “We always celebrate the ’94 team, but not enough has been made of that ’78 to ’79 team. You can make the argument that if the ’94 team lost, that the ’78 to ’79 Rangers team would be the most beloved of all time. That’s very much the genesis of the book. We realized that not too many of those guys had passed. I had many of them on my radio show over the years, so I had a lot of contact information already. With all of that, it would probably be easy to track down every single guy that was still alive.” 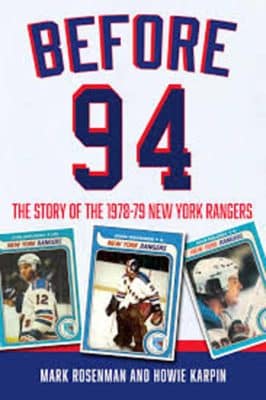 Rosenman, who currently hosts and produces SportsTalkNY on WLIE 540 AM is credentialed by the NHL and covers both the Islanders and Rangers. Karpin has been a sports reporter for more than 30 years and has covered everything from the World Series to the Stanley Cup Finals in addition to being a contributor to Mad Dog Radio, MLB Radio and NFL Radio. Between the two of them, Rosenman and Karpin were able to tap into their multiple contacts and come up with a chronological format that captured both the tabloid fare and behind-the-scenes drama most fans were unaware of at the time. Everything from the animosity between future Hall of Famers Phil Esposito and Rod Gilbert, the signing of high-priced Swedish free agents Anders Hedberg and Ulf Nilsson to the naming of Dave Maloney as the youngest captain in Rangers history and the hiring of former nemesis/Philadelphia Flyers coach Fred Shero to helm his former division rivals. From here, the duo chronicled every regular season and playoff game right up through the Stanley Cup Finals with a thorough capsule description of each game that included the tilt’s final score. It’s an intriguing ride that both serves to titillate hockey fans who may not have been around to witness history and refresh the memory of those who may have been along for the ride the first time. It was a thrill for Rosenman, who was a rabid 18-year-old Rangers fan growing up in Seaford whose favorite players included Don Murdoch, Nick Fotiu, Don Maloney and goalie John Davidson. Aside from Pierre Plante, Tim Bothwell and Mike McDougal, Rosenman was able to interview every living member of that particular squad for the book. And while his team were rightfully considered considerable underdogs in this Cup run, given the fact that Esposito was the only future Hall of Famer playing for New York versus the 10 the Canadians boasted, the reaction he got from the players was surprising for him.

“The most surprising thing was that out of all the guys we interviewed—and I think we interviewed 24 or 25 guys we interviewed for the book—I asked if in looking back, were they most proud of the fact that they overachieved or was there disappointment at the fact that they had that shot at the Cup [and lost]?,” Rosenman recalled. “To a man, they felt they should have won. They were disappointed that they didn’t win. And they all have regrets. I would have thought that team would have had so much more pride than regret. But yet, they all had a huge amount of regret because they felt like it was their opportunity and they should have won.”

Rosenman beams when asked what he thinks made that Rangers team so special.

“It was just a magical season. The Mafia Line, with the two Dons and the Godfather. The two Swedes—Hedberg and Nilsson and JD just standing on his head. It was just an amazing year,” he said. “The players captured the city. And you have to understand that they captured the city when the Yankees were winning World Series. The Islanders-Rangers series captivated New York in a way that no other hockey series did up to that point.”