The First Thing I Ever Cooked

Latin chefs share their early memories in the kitchen

Believe it or not, famous chefs and Food Network stars weren’t always the culinary wizards we know them as today. Like everyone else, they too were just kids in the kitchen, crafting concoctions—some tasty and some not so tasty. From sweet treats to traditional dishes, learn how Latin chefs like Aarón Sánchez, Wilo Benet, Roberto Alcocer and more got their start in the kitchen.

Chef, restaurateur and cookbook author, Mary Sue Milliken specializes in Latin cuisine and also shared a sweet memory of the first dish she ever cooked.

“When I was about 6 years old, my mom and I found a recipe in Ladies Home Journal for crushed up potato chip cookies, and even today, they are still one of my guilty pleasures,” said Milliken, who was never one for a sweet tooth. “They are essentially shortbread cookies with potato chips in them. We melted chocolate chips and drizzled the chocolate over the cookies with our fingers,” said Milliken of the cookie recipe, which has not only been added to one of her cookbooks, but to the menu of her restaurant, The Border Grill.

Roberto Alcocer’s first memory of cooking is a special one. It was after baking his first batch of brownies when the chef and owner of Malva Cocina in Baja, Mexico, decided to devote himself to his profession.

“Since I was very small, I liked helping my mother in the kitchen,” said Alcocer, whose Oaxacan mother emphasized the importance of eating at home with family. However, it was a homework assignment that peaked Alcocer’s interest in the kitchen.

“The teacher let us pick which task to do, which we had to make without the help of our parents,” said Alcocer who chose to bake brownies, later learning that his mother saved the brownie recipe that he found in a book years ago, which he added to his restaurant menu.

Chef and busy restaurateur Aarón Sánchez traces his memory back to a favorite dish he made with his mother. And that’s no surprise, since his mama is Zarela Martinez, a famed cookbook author, chef and restaurateur herself.

“Sopa Seca was one of my favorite dishes growing up, and I would always ask my mom to make it for me,” said Sánchez. “One day she got tired of me constantly asking so she taught me how to make it.”

Sopa Seca traditionally uses fideos, which is Spanish for noodle, but Sanchez shared that he sometimes uses alphabet pasta to make the dish more playful.

Long Island-born American chef and television personality Sue Torres took the frozen route when playing chef as a kid, creating a sweet treat with ingredients from her mother’s pantry.

“My mom owned a chocolate store when I was in grammar school, so we always had chocolate, nuts and dried fruits on hand for when she felt like playing at home,” said Torres. “When I was nine, I dragged my sister into concocting a peanut butter truffle, which we called ‘Sisters’ Delight.’”

“The very first thing I remember cooking was rellenos de papa or fried stuffed potato croquettes,” said Benet, revealing that his mother would always hand him the rellenos to finish shaping. “I must have been 10 years old, but stumbling into cooking via dishwashing and helping my mom is my earliest memory of preparing any food item.” 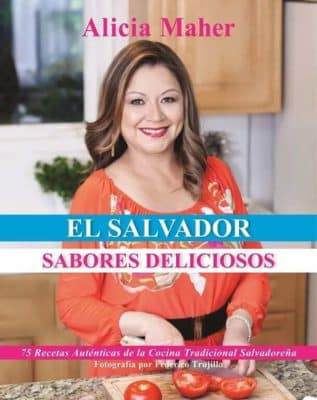 “My great-aunt taught me how to cook it when I was 8 years old. She always served it with fresh warm tortillas and a slice of queso fresco,” said Maher. “To this day, I use it on my grilled chicken, fish or carne asada; my husband likes it on a baked potato; and our sons love it with spinach and pasta or a batch of warm corn tortillas.”

Mexican chef and restaurateur Roberto Santibañez came to enjoy chemistry and mixing concoctions, which in part led him to become a chef. He started his cooking career with a bang—literally.

“When I was a kid, about 6 years old, I was camping with my father and he asked me to cook breakfast,” said Santibañez. “I had seen my grandma beating eggs and in Mexico they beat eggs like they’re going to batter something. First you beat the egg whites and then add the yolks.”

With only a cookie tin at his disposal, Santibañez put his scrambled eggs in the tin and covered it.

“Everything exploded after I put it on top of the heat. My dad ended up making breakfast for us that morning since I accidentally blew up ours,” laughed Santibañez, who eventually perfected breakfast.