The Darkness Brings Rock & Roll Back Into The Light

Rock and roll may have been pushed out of the limelight by hip-hop, K-pop and whatever social media is spewing out, but know that The Darkness has kept those fires burning ever since they came roaring out of Great Britain with their 2003 debut, Permission To Land. Fast forward nearly two decades and the band is coming back across the ocean after COVID-19 kept them on their side of the Atlantic for the past two years. For lead singer Justin Hawkins, the frustration that kicked off their pandemic odyssey started when the band’s tour supporting their last studio outing saw the coronavirus seemingly on the Darkness’ tail all the way up to when the quartet was Down Under.

“We were in Australia and realized how serious it was becoming,” Hawkins recalled. “It started when we were promoting [2019’s] Easter is Cancelled, which turns out two Easters were canceled after that album came out. We were touring Europe for that record and noticed that as we played different towns, the numbers were going up and it seemed like COVID-19 was following us. Then we went to Australia and watched Donald Trump declaring it a state of emergency. At that point, the border to New Zealand was closed and the last show was supposed to be in Auckland, so we came home.”

Hawkins retreated to his home base of Switzerland, while brother Dan and fellow bandmates Frankie Poullain and Rufus Tiger Taylor retreated to the UK. With all the downtime, Justin Hawkins had to wait out his bandmates finally agreeing to start working up material for what became their current studio outing, last year’s Motorheart.
“We basically didn’t do anything for ages,” Hawkins explained. “I started a Patreon account, which has been really great fun and an opportunity to connect with the fan base. We’ve also done various things as individuals. After that first wave, when more or less every musician and artist was doing ‘creativity,’I was up for doing stuff, but the rest of the guys weren’t. I was pretty frustrated at the time. But looking back, they were totally right. We just waited and made a record on our terms. We had to do it remotely.” 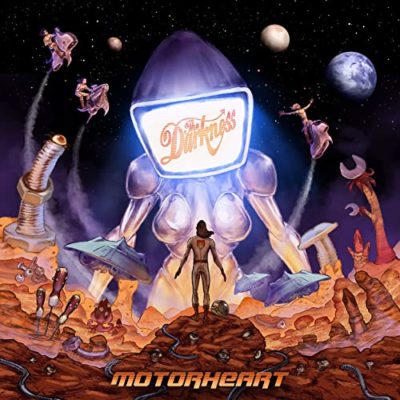 When The Darkness started crafting Motorheart, the process was done remotely due to geographic logistics and pandemic-fueled travel restrictions. But while it seemed to be an odd way to work—Justin Hawkins sending lyrical ideas and guitar solos back and forth with his bandmates, it was an approach he grew to embrace.
“They were sending me things and I was writing to the arrangements as opposed to our prior collaborative process where we’d be sitting in a room, hear a riff and we’d be jamming off of it and I’d write some lyrics and we’d come up with some melodies,” Hawkins said. “It takes a bit longer, but I got to see my daughter and do all the things I want to do. I hope that’s a good indication of how we can carry on with a combination of the old way and the COVID-19 way.”

Regardless of whatever recording technique the band employed, understand the songs embrace the idea of cheeky rock and roll, with plenty of metaphorical nods and winks that finds the foursome kicking off the album with “Welcome Tae Glasgae,” an opener punctuated by squalling guitar, fake Scottish accents and Hawkins’ keening falsetto.

Elsewhere rockers like the locomotive thumper “It’s Love, Jim” and strutting swagger of “You Don’t Have To Be Crazy About Me… But It Helps” give way to “Sticky Situations,” a power ballad soaked in vulnerability and Queen-like stacked vocals and “So Long,” an acoustic bonus track that is a calming counterbalance to the theatrical cheekiness fueling the rest of the album. The most unusual cut is the sprawling title track, which somehow manages to weave prog-rock and speed metal time signatures while wrapping it all up in Middle Eastern-flavored guitar runs. That’s all on top of the song sharing its name with the song’s main character, a sex robot. As salacious as it may sound, Justin Hawkins admits pandemic-forced isolation yielded deep introspection about his own relationships and served as the inspiration for “Motorheart.”

“I think in a situation like flying solo most of the time and literally being stuck on your own for weeks on end, the walls bear down during those cold Swiss evenings,” he said. “I started thinking why am I on my own? I then came up with a guy, not dissimilar to myself, who sees patterns emerging in all of his relationships, but never shines the light on himself. So in desperation, he chooses a love robot designed to fulfill all of his needs. The problems of his prior relationships then start to manifest themselves in the robot that’s been custom-built to satisfy his needs. And he still doesn’t realize it’s his fault. It’s kind of like every relationship I’ve had I’ve [messed] up because I’m an idiot. I’m very slow on the uptake, but I think I’m starting to realize this and celebrate it in song.”

While songwriting has served as a source of self-therapy, Hawkins and the rest of The Darkness are primed to play live. Building up the anticipation is how last fall’s European dates were canceled because of spiking pandemic numbers even as the band was announcing the 2022 American leg of the tour. But recent rescheduled UK dates left Hawkins and his crew very pleased and raring to unleash their tsunami of showmanship and flamboyant musicianship on Stateside fans.
“We just did a great tour of the UK and I would say it was quite triumphant,” Hawkins said, “What you’re going to see is like a normal Darkness show, but with a certain level of intensity and understanding between the band members. I’m always impressed by ourselves when we play now. We just did these shows in Ireland and they were unbelievably good. The first show, we forgot how to sing and play and by the second show, it was like we were a different animal.”

Given how The Darkness have become the elder statesmen of their generation of rock bands, Hawkins is bullish on the genre’s staying power in the hands of younger groups like Starcrawler and Amyl and the Sniffers that have come up in recent years.
“I’m really excited about the state of rock and roll,” he said. “There is some great stuff coming through. A lot of these groups are inspired by the things I like and also taking it to another level because of the influences that they’re bring to it, which is what rock should be. There’s no reverence in bands like that. They just don’t get a [damn] and it’s awesome. Obviously, that’s a more nihilistic, punky way of doing things, but that’s how rock develops. There was a period of time when I was frustrated with it and everything that came through was a really stale retread of maybe just one period of one particular band’s thing that they were copying. It’s not like that anymore. There’s loads of stuff that’s coming through that’s properly exciting. I really believe it’s a great time for rock.”