The Bard Of Hook Lane

At the age of 75, Rupert Holmes has led a rich and successful creative life that’s found him leaving his mark on the worlds of pop music, Broadway, publishing and television. Most people know him as the singer-songwriter who blew up the charts in 1979 and 1980 with “Escape (The Piña Colada Song)” and “Him” respectively. His connection with theater mavens came through productions of his ranging from his Tony Award-winning 1985 Broadway musical debut The Mystery of Edwin Drood along with other works including the Tony-nominated one-actor play Say Goodnight, Gracie. Holmes made his mark on TV with the AMC series Remember WENN, a dramedy about a fictional Pittsburgh radio station in late ‘30s and early ‘40s; the British-born singer-songwriter created and wrote all of its 56 episodes. And in the realm of books, the man born David Goldstein has written 2003’s Where the Truth Lies (later adapted to film by Atom Egoyan and starring Colin Firth and Kevin Back), the multimedia 2005 release Swing and the forthcoming Murder Your Employer: The McMasters Guide to Homicide Vol. 1. 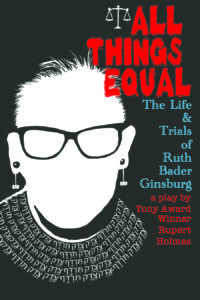 And he just launched All Things Equal: The Life and Trials of Ruth Bader Ginsburg, a one-actor play about the late Supreme Court justice currently playing at the Bay Street Theater in Sag Harbor. But for the self-proclaimed storyteller, it all began in 1950, when his American serviceman father brought his pre-school age son and British-born wife to live Stateside.
“When I was three-and-a-half, my parents told me we were going to move to a place called Long Island,” Holmes recalled. “I pictured pirate ships, palm trees and lagoons and then we moved to Levittown.” 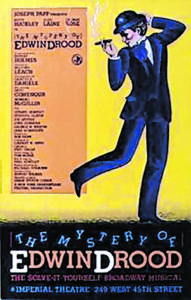 Despite the disappointment that he wasn’t going to end up in any kind of Treasure Island-type scenario, the British lad quickly embraced an environment that would shape his world-view. His father Leonard worked at NBC Radio conducting the string section of famed conductor Arturo Toscanini’s orchestra and as a media member, Holmes’ father was one of the first people to own a television, which proved to be quite a popular acquisition.
“We had a TV before almost anyone in the neighborhood had a television,” Holmes explained. “And people used to come over to supposedly visit my parents, but they really came over just to watch TV. I wasn’t a couch potato, I was a floor potato because I sat on the floor.”

This magic box proved to be an entry way to imagination for Holmes, who is quick to rattle off myriad variety and puppet shows that made up children’s programming of the day. He recalls them as if he viewed them yesterday—Hopalong Cassidy, Johnny Jupiter, Lucky Pup, Foodini the Great and Rootie Kazootie were some of his favorites. The Buster Crabbe Show was one program he particularly gets a kick out of recounting.
“Buster Crabbe had his own local live TV show and he’d host it with kids—and he wasn’t good with kids,” he said. “It was on WOR TV out of New York. He sat in a desk in a ranch foreman’s bunkhouse and I remember there was some kid who was sick. He asked the children at home to write to the kid to cheer him up. He came on one day and yelled at the kids in the TV audience and said, ‘You didn’t write. None of you wrote.’ He yelled at them and I cried.”

These programs also planted the seed for Holmes’ love of telling stories via song.
“They were very inventive and what they lacked in budget, they made up for with creativity,” he said. “Fran Allison of Kukla, Fran & Ollie was a good singer and she could have made a good living doing just that. Fran would invariably end up singing some kid of sweet duet with either Kukla or Ollie at the end of the show. And it would either be some current popular song or something original they’d written for the show. And it would happen with a lot of these shows. There would always be a piano or organ on the set and they would do a musical number. It would become quite normal. I began to think that when stories were told or plays were acted, it would culminate in some kind of song that came out of that moment.”

Shaping all of it were facets of suburban living Holmes recalls wistfully, from eating at a Chinese restaurant for the first time (“I remember having chop suey and fried rice and it was the most delicious thing I ever had”) to his British mother staving off homesickness by taking him to the local theater to see Hollywood films shot in England including Ivanhoe and The Black Rose. All that on top of the communal nuances he recalls being a huge part of neighbors getting together.
“In those days, what was big was to play mah jongg and Canasta,” he said. “Everyone would get together for Canasta and also bring a Jell-O salad with pieces of pineapple and nuts in it. On TV you would watch the trotters race from Yonkers Raceway.”

And there was even a bit of trauma stoked from living in a community made up of William Levitt homes.
“When we would go somewhere in the car and come back home, I could not imagine how my parents were able to find their way back to our house because it was like an absolute maze,” he said. “The houses were all the same and the only hope I ever had was that was a white house near us had this intense Navy blue trim. I couldn’t recognize my own home but when I saw what became my metaphorical lighthouse, I knew we were four or five houses away from home.”

Ironically, Holmes’ father lost his livelihood after NBC started shutting down original radio programming and transitioning over to television. A job teaching music in Nyack public schools opened up and the family moved from Levittown to Nanuet shortly thereafter. But the three years Holmes called Long Island home continue to resonate with him to this day. “My memories are vivid of that time,” he said with a smile. “Levittown was an amazing place to grow up in.”

All Things Equal: The Life and Trials of Ruth Bader Ginsburg will be running through Nov. 27 at the Bay Street Theater & Sag Harbor Center for the Arts, 1 Bay St., Sag Harbor. For more information, visit www.baystreet.org or call 631-725-9500.

Zorn’s has been making delicious homemade food since 1940 when Peter Zorn opened his first retail store on Long Island. His vision was to...

Game day watchers are projected to eat more than a billion wings Football fans might be surprised at the matchup, but one thing is not...

Most Popular Cuisines In America

A new study has revealed that Chinese food is the most internet-searched cuisine in the United States, according to Google search data. The research, conducted...

Who doesn’t love sharing a sweet treat with a loved one on Valentine’s Day. With February also being American Heart Month, here are a...

Most Popular Cuisines In America