The Lindeberg Country Home
1 of 3

It’s the perfect coffee table book and conversation piece. Harrie T. Lindeberg and the American Country House takes a look at the American architect’s monumental portfolio of design and construction. From massive estates in New York, North Carolina and Virginia to the mansions of Long Island commissioned by his Gatsby-inspired millionaire clients, Lindeberg’s name is ubiquitous with the American country house. Authors Peter Pennoyer and Anne Walker journey back to the architect’s historical works, with stunning photos and tales of how these breathtaking builds started from the ground up.

Walker is an architectural historian and holds a master’s degree in historic preservation. She and Pennoyer have written a number of monographs on New York-based architectural firms from the first decades of the 20th century and their new book, Harrie T. Lindeberg and The American Country House is their fifth. Pennoyer is an award-winning architect, who designs styles that are inspired by history.

“Our architecture reflects our continuing historical research,” said Pennoyer. “I’ve always been passionate about old houses—wanting to know not just about the architecture, but also about the people who commissioned the houses and lived there.”

The co-authors visited most of the houses together and behind the lens was architectural photographer Jonathan Wallen, whose full-color photos, according to Walker, “breathe new life and depth into the houses.” The book includes more than 200 photos of homes, floor plans and sketches.

“Before our book, the only photographs of Lindeberg’s work were black and white,” said Walker, adding that she and Pennoyer wanted to create a book about these stunning historic homes because Harrie Lindeberg “had somewhat of a cult following among architects.”

“Up until now, the only book that existed was Mark Alan Hewitt’s reprint of Lindeberg’s own 1940 monograph. Now out of print, this book is expensive and hard to find,” said Pennoyer, adding that he and Walker were familiar with Lindeberg’s work and were attracted by how it is so organic and tied to the landscape. “People often make suggestions about whom we should focus on next and several people had put their vote in for Lindeberg.”

Lindeberg passed away at his home in Locust Valley, Long Island, leaving behind a legacy of having designed some of the grandest country houses in the United States. He drew design inspiration from the English Arts and Crafts movement, which is evident in his designs. For local readers, the book features several homes and buildings including the Edward T. Cockcroft house in East Hampton; the Henry L. Batterman house in Glen Cove; Mill Neck Railroad Station; G.W. Baxter House in Glen Head; and several houses including his own, in Locust Valley.

“Lindeberg has been called the ‘American Lutyens,’ as his work defies categories but distills a personal style that weaves classical and vernacular threads,” said Pennoyer. “There is something about these homes that is very compelling. Perhaps because they seem to romantic and, in some cases, beguiling.” 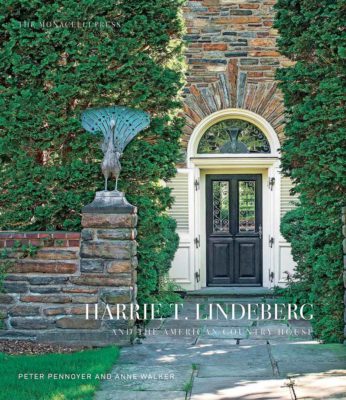 “Many of the houses were originally occupied by interesting families and the level of detail, from the rooflines to the wrought iron touches, is astonishing,” added Walker. “Very few of these houses have been torn down and many still exist as private homes so they remain as livable as they were back in the 1920s.”

As for researching such a book, Walker said it takes at least one full year of research before embarking on the writing process. For this book, the authors visited archives as far as Houston, TX, and Lake Forest, IL.

“Lindeberg’s archives have disappeared, so finding drawings was a piecemeal endeavor, but happily, some of the homeowners have the original drawings,” said Walker, noting that Lindeberg’s intact architectural library is located at LIU Post.

With a portfolio spanning dozens upon dozens of homes and buildings, the selection process in choosing which of Lindeberg’s design to feature was no easy feat. Pennoyer said he and Walker chose to set their focus on several of his iconic houses including Mondanne and Fox Hollow Farm but also included lesser known homes.

“We tried to show a range of size and styles from Lindeberg’s more informal beach cottages in Easthampton to full-blown manor houses like the Armour house in Lake Bluff, IL. The smaller Miller House in Grosse Pointe Farms shows the trajectory of his later work,” said Pennoyer. “He did an incredible amount of work on Long Island, but we wanted to show that he really became in demand nationally, designing houses throughout the country—not just the east coast.”

Harrie T. Lindeberg and the American Country House is published by The Monacelli Press. For more information or to order the book, visit www.monacellipress.com.