Save for Super Bowl Sunday, Thanksgiving has turned into one of the National Football League’s signature days, dating back to when the league kicked off this tradition back in 1920. Over the near-century that the NFL has staked its claim to providing entertainment for the masses recovering from the holiday’s culinary onslaught, there have been plenty of highlights ranging from the storied Red Grange making his NFL debut in 1925 to the Chicago Bears winning the first overtime Thanksgiving game in 1980.

A major gaffe by defensive tackle Leon Lett (number 78 above left) enabled his Dallas Cowboys to snatch defeat from the jaws of victory in this 1993 Thanksgiving game. In the middle of a freak snowstorm at Texas Stadium, Dallas led 14-13 when Miami went for a field goal with 15 seconds left. The Cowboys blocked the kick, but rather than allow it to roll harmlessly out of bounds, Lett dove for the ball, a pile-up ensued and the Dolphins recovered. Miami kicker Pete Stoyanovich’s second-chance, chip-shot field goal won the game for Miami. 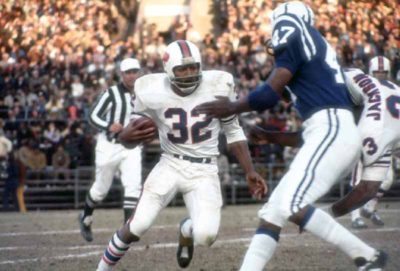 The Juice Is Loose

The Detroit Lions (along with the Dallas Cowboys) have been one of two franchises that have traditionally hosted the Thanksgiving game dating back a number of decades. In 1976, the Lions hosted the hapless Bills. And while Detroit came away with a 27-14 victory thanks to the anemic passing of Buffalo quarterback Gary Marangi (4-for-29 for 21 yards), running back O.J. Simpson (left) killed it, putting up 273 yards and setting the single-game rushing Thanksgiving Day record. This NFL record stood until Walter Payton of the Chicago Bears beat it by two yards nearly a year later. 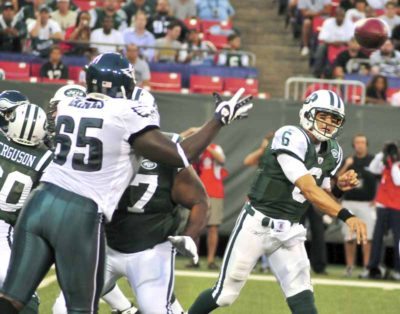 Bottoms Up For Mark Sanchez

For Mark Sanchez (far right), failure has always been more highlighted than success. No one remembers the four playoff games he won his first two seasons as the Jets quarterback. Most focus on the nationally televised consecutive fumbles the Jets had against the rival New England Patriots during a 2012 Thanksgiving 49-19 drubbing. Playing behind a porous line, Sanchez took the second fumble, tried to run it himself, ran into the rear of guard Brandon Moore, lost the ball and Pats safety Steve Gregory picked it up and ran the pigskin in for the score.

Far from a marquee quarterback at a time when Roger Staubach and Terry Bradshaw were his peers, Miami Dolphins field general Bob Griese (left) managed to do something that the aforementioned duo never did—throw six touchdowns in a single game. And while that 1977 Thanksgiving game found visiting team Miami taking the St. Louis Cardinals down by a record score of 55-14 thanks to the six touchdowns thrown by Griese, he did it by doing 15-for-23 and only throwing for a modest 207 yards. In his first Thanksgiving Day game, the Colts’ Peyton Manning tied an NFL record with six touchdown passes in a 41-9 win over the Lions. 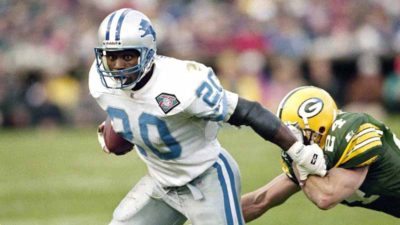 Barry Beats Down The Bears

Given the Detroit Lions’ long association with playing on Thanksgiving Day, it’s no surprise that career Lions running back Barry Sanders (left) put up lofty numbers in 10 contests played (931 rushing yards/eight touchdowns). Sanders put a real hurting on the rival Bears in 1997, when he rushed for 167 yards and three touchdowns during a 55-20 rout of Chicago. Sanders not only moved past Eric Dickerson to number 2 on the NFL’s all-time rushing list, but ran for more than 2,000 yards that season.