Automobile magnate Henry Ford once said, “Coming together is a beginning; keeping together is progress; working together is success.” And while this may be an odd source to reflect how far the Tedeschi Trucks Band has come, understand that since Susan Tedeschi and her husband Derek Trucks decided to join creative forces in 2010, they’ve attained quite a number of milestones. Since merging their bands, the TTB has blossomed into a 12-piece, released three studio albums, two live albums and had their 2011 debut album Revelator land a 2012 Grammy for Best Blues Album. At a time when the music industry is fragmented and the current trend seems to be about minimizing and having an artist’s output be more singles-driven, the idea of being a large touring outfit very much committed to recording complete albums can be a pretty scary proposition. And it’s a decision Trucks admits he and his wife were made well aware of when they decided to join unite their bands after watching the 1971 rock documentary Mad Dogs and Englishmen.

“I remember seeing that, thinking about having a horn section and saying we should give it a shot. Our manager and all the people that are our devil’s advocate asked if we were sure and if we wanted that many people on the road,” Trucks recalled with a laugh. “ We decided we were going to do it and we did. There were some headwinds for the first few years because I think people wanted it to be her band or my band. For the first few years, we avoided songs from her catalog or my catalog. We did tunes that the band was writing or tunes that we had not played before. We wanted it to stand on its own and sink or swim. And if we got through those first few years, the momentum would hopefully start carrying it.”

Suffice it to say, TTB has evolved into a well-oiled unit that fuses Tedeschi’s bluesy playing and soulful phrasing with Trucks’ biting slide work and extended jamming that’s on full display on Live From the Fox Oakland, the recently released 2-CD/1-DVD set that is also the band’s second live outing. Not unlike the aforementioned Mad Dogs set, this TTB set mixes in originals while also pulling from the canons of a wide array of artists including Sleepy John Estes, Miles Davis, The Beatles, Santana and with a nod to that other Joe Cocker live double-album, a riveting reading of Leonard Cohen’s “Bird On a Wire.” For Trucks, it’s an accurate reflection of how solid a state TTB is currently at. 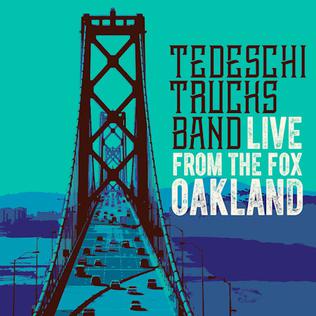 “The band was in a great spot late last year. There had been some personnel changes over the last handful of years and it had evolved into this place where the music was getting more exploratory. We were starting to hit on things that we hadn’t hit on before and maybe some of the tunes had started to open up,” he explained. “Originally we were just going to film it and then we decided to record the whole tour and do a live record as well. We happened to catch a great night on film that we thought should also be a record. I thought it was nice that it all lined up.” Interestingly enough, the TTB took the inspiration behind that legendary 1971 Cocker caravan tour that nearly destroyed the late singer and went so far as to recreate a substantial amount of Mad Dogs back in September 2015 at Virginia’s Lockn’ Festival. And while Cocker was originally supposed to participate, he pulled out in 2014, eventually succumbing to cancer in December of that year. The show became a tribute to the late English vocalist and included participation by a number of musicians that had participated in the initial tour including Leon Russell, keyboardist Chris Stainton and singers Rita Coolidge and Claudia Lennear. Betts admits uncertainty about how things were going to go, but felt better once Russell was aboard.

“When we were asked about doing it as a Cocker tribute, we didn’t know at first,” he said. “But then we reached out to Leon Russell and once he was in then it felt right and all of the original cast was gung ho. That was a special few days of rehearsal and then the show.”
With both Tedeschi and Trucks having so much material to draw from, fans can expect a rich mix of songs from different points of the duo’s musical journey. All this along with the knowledge that TTB is working up material for a new studio effort that could quite possibly emerge by year’s end.

“We recently got back from about a month in Europe and had a little break. At some point, the band is going to stay in the studio to revisit about eight or 10 tunes that are floating around in various states of completion. But we’re going to go in and keep writing because everybody’s mind is on the next studio record right now,” he said. “At this point [in our live shows], we feel like this band is now a part of our history and musical life to the point where we’ll play tunes from her catalog or mine. Or even an Allmans tune here or there—things that we’ve been a part of. We don’t have to keep it all separated. For us, it’s this is what we’re doing. It’s all fair game.”

Curious Incident touches the very depth of the soul The winner of five Tony Awards, including the 2015 Tony Award winner for Best Play, The...
Read more
Arts, Music & Entertainment

The election of Donald Trump has inspired a small library of books, many of them written in a state of anger. Adam Gopnik’s A Thousand...
Read more

It seems there is a steady supply of a variety of fish across most of Long Island up to this week. Although the on...
Read more
Long Island News

What celebration would be complete without cookies? Don’t show up to your Christmas party with a box of store bought treats, the holidays are...
Read more
Lifestyle & Culture

Flip through all of our Long Island Weekly covers thus far, from our inaugural issue in November 2015 through our anniversary edition, November 2016. To...
Read more
Lifestyle & Culture

The worlds of literature and art meet in the Art League of Long Island’s Jeanie Tengelsen Gallery this summer. Meet the authors and listen...
Read more

When the crisp autumn air begins to rustle the leaves, that’s when it’s time to swap out your Sea Breeze candle for Apple Spice,...
Read more
Food & Leisure

In honor of National Dog Day on Aug. 26, HelloFresh and Chewy have teamed up to show the world that it’s okay for your...
Read more
Food & Leisure

La Vigilia And The Festival

Two similar yet distinctly unique holidays will merge this holiday season, as the first night of Hanukkah falls on Christmas Eve for only the...
Read more