Long Island remains most dangerous place in state for walkers

There could have been few better settings to talk about pedestrian safety.

Vision Long Island and the Long Island Complete Streets Coalition held a press conference July 7 at the corner of NYS Route 109 (aka Fulton Street) and Main Street in Farmingdale. Standing yards away from one of the many dangerous intersections on Long Island, organizers introduced a 10-point emergency pedestrian action plan to make streets across Long Island safer for pedestrians and bicyclists—and, as a consequence, for drivers as well.

According to the New York State Department of Transportation (NYSDOT), 142 people were killed in Nassau County in vehicle-pedestrian crashes between 2011-15, and a further 4,191 were injured. The respective figures for Suffolk County were 205 and 2,393.

Eric Alexander, executive director of Vision Long Island, emceed the event. Referring to the numbers, he said, “They are not just statistics, they are people, real people.”

“We have a human imperative to take action here,” he added. “And the great part about it is, we can do it.”

He introduced two women whose loved ones were struck by cars and provided a human face to the problem.

On Sept. 22, 2010, Sandi Vega of Wantagh received the horrible news that her daughter Brittany was killed crossing Sunrise Highway on her way to school.

Vega said that after this tragedy, “I made it my mission to help where I could,” and was nine months pregnant when she accepted Alexander’s offer to travel up to Albany to advocate for the Complete Streets Act, which was signed into law by Governor Andrew Cuomo in 2011.

Jivanna Bennaeim of Great Neck described how her husband Oren was killed by a hit-and-run driver while crossing Middle Neck Road. He was at a crosswalk and had right-of-way.

Bennaeim pleaded that it was time to carry on a campaign against distracted driving and speeding similar to the one launched against drunk driving.

She reached out to Alexander, who serves on the board of the advocacy group Tri-State Transportation Campaign. “She was one of the inspirations for getting this press conference together,” Alexander noted.

Leadership From The Top

Alexander praised Governor Cuomo for spearheading the New York State Pedestrian Safety Action Plan. According to a press release, the “five-year, multi-agency initiative provides $110 million to improve safety for pedestrians through infrastructure improvements, public education efforts and enforcement across Upstate and Long Island. The plan will run through 2021 and is being implemented cooperatively by the [NYSDOT] focusing on engineering improvements, the Department of Health conducting public education and awareness campaigns, and the Governor’s Traffic Safety Committee coordinating increased law enforcement.

The operative phrases at the press conference were “traffic calming,” along with “complete streets.”

The Institute of Transportation Engineers (ITE) has defined traffic calming as the installation of measures designed “to reduce traffic speeds and/or cut-through volumes, in the interest of street safety, livability, and other public purposes.”

According to the NYSDOT, “A Complete Street is a roadway planned and designed to consider the safe, convenient access and mobility of all roadway users of all ages and abilities. This includes pedestrians, bicyclists, public transportation riders, and motorists; it includes children, the elderly, and persons with disabilities.”

Complete Street laws have been passed in a number of communities, including the Town of Hempstead.

Route 109 is the poster child for the kind of traffic engineering that has dominated the field for decades: made to maximize the smooth flow of vehicles, with no thought for pedestrians, bicyclists and the type of zoning it passes through. As speaker after speaker held forth, there was a constant background noise mix of screeching brakes, horns, and heavy truck engines straining to move the heavy rigs that also shook the pavement.

Alexander noted that there were 40 traffic calming projects under way on Long Island, as opposed to none 20 years ago.

Also present was state Senator Kemp Hannon, a sponsor of the Complete Streets legislation. He read a letter he had received that morning from the NYSDOT detailing the safety improvements that were planned for Route 109.

A handout at the press conference read: “Walkability is critical in planning for our future with nearly 13,000 units of transit-oriented development approved in the last decade with more on the way. The real benefit to this form of growth is to provide support for local businesses, housing options and a reduction of auto usage in the form of less vehicle miles traveled per household. If that promise is to be realized we need to take seriously the conditions for young people, seniors, disabled, families—everyone who seeks to walk and bike in a community.”

The Emergency Pedestrian Safety Action Plan that was presented at the July 7 meeting:

1) Design streets to reflect adjacent land uses. Speed may be a priority in areas between “places,” but in downtowns and other areas where there are many people present, safety, comfort and access to adjacent properties should take priority over speed. A person hit by a car going 40 mph has only a 10 percent chance of surviving the crash;

2) The design speed of the roadway should match the posted speed. Simply putting a 30 (or 40) mph speed limit sign on a wide, straight road designed to handle 50+ mph traffic does not slow traffic down;

4) Shorten crossing distances in areas with high pedestrian activity. Wide intersections allow drivers to make turns without slowing down to a safe speed. They also put the people crossing the street at risk for a longer time because they are on the road surface where they could potentially get hit for a longer time to get from curb to curb;

5) 12-foot-wide lanes should not be used in areas where pedestrians are present. Wider lanes encourage faster driving. They are unnecessary and inappropriate to use in areas where drivers should be driving more slowly due to surrounding conditions. 10- to 11-foot lanes are just as safe for roads with posted speeds under 45 mph; 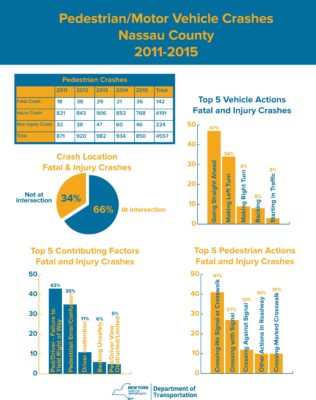 7) Dedicated funding for local safe streets and traffic calming needs to be renewed. Dedicate at least 2 percent of the $1 billion increase in the NYSDOT Capital Program (a minimum of $100 million) to pedestrian and bicycling projects over the next five years;

10) Local citizens, businesses and municipalities need to unite to make their streets safe. Taking action at public meetings, lobbying Albany and Washington for funding, working with local community and transportation organizations are all needed. Local residents and businesses and government officials working together can raise awareness and physically change many of Long Island’s deadliest roadways.