As someone whose musical legacy was forged by his work with The Black Crowes, Rich Robinson could have had a difficult time establishing himself. All the more so given the fact that his prior group had splintered and reunited on different occasions due to the differences he had with his older brother Chris, who was also the band’s vocalist. Since splintering apart most recently in 2015, the younger Robinson has carried forth with his most recent project, The Magpie Salute. What started out as a kind of Mad Dogs & Englishmen 10-piece musical revue that enjoyed a string of sold-out tour dates and a 2017 self-titled debut brimming with a mix of originals and covers of Pink Floyd, Bob Marley, The Faces and War.

This year finds Robinson paring the group down to a sextet led by Robinson and rounded out by front man John Hogg, ex-Crowes Marc Ford (guitar), Sven Pipien (bass), Matt Slocum (keyboards) and Joe Magistro (drums). They’ve recently emerged from the studio with their sophomore bow, High Water I. The recording sessions that took place at Nashville’s Dark Horse Studios were fruitful enough to yield a surplus of songs that will hit the market next year as High Water II. Having a musical relationship with Hogg that goes back to the latter’s time singing for Moke, which opened for the Crowes back in 1998, Robinson was pleased by the bounty of music that he, Hogg and Ford were able to come up with.

“We had [all] messed around on tour a little bit, come up with some stuff at sound check and then saw what happened. When we started writing for the record, we kind of went to Nashville—me, John and Marc—and put everything on the table,” Robinson explained. “Some songs, I wrote the whole thing. Some songs Marc wrote the whole thing and some songs I wrote with John. It was really what was best for the song. If I couldn’t add anything, I wouldn’t. If Marc didn’t have to add anything, he wouldn’t. It really came down to what was best for the record, the song and the band. There was definitely an excitement and a creative explosion happening with this band. We recorded 29 songs, put them up and decided what made sense for the first record, which would lead into the second record.”

Currently out on the road, Magpie Salute has been mixing dates with Gov’t Mule and Blackberry Smoke and are now playing more intimate club dates. Fans are promised a rich cross-section of music in the band’s setlist. 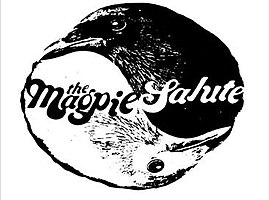 “We’re going to focus on High Water I, but, we like to play a couple of hours, so we’ll bring some covers, solo work and some Crowes songs in,” Robinson said.” We keep it moving. We’re not really stuck in one mode, you know what I mean?”

As for his band’s unusual name, the Georgia native points to the symbolism of this avian species both culturally and how it ties into his past.

“I always liked the word magpie and also the connotations. Crowes have these incredible mystical connotations and a lot of it tends to be dark. But they are brilliant birds and beautiful and symbolically cool. But one thing I liked about the magpie was that it really encompassed both the light and the dark,” Robinson said. “I thought it was a cousin of the crow and there are some really cool elements to it that I thought it would fit. For the first time, I got to choose what I wanted to be a part of.”