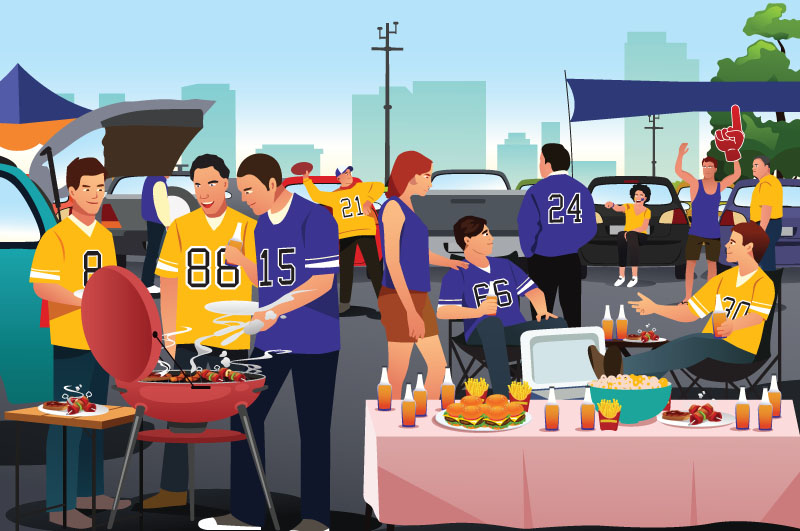 With the baseball season in full swing, it’s time to arrive at the parking lot hours ahead before first pitch to tailgate. But, what is tailgating and how do you do it correctly?

Tailgating is essentially a picnic where people can cook food on mini grills and serve drinks from the back of their car’s tailgate. Generally, tailgating happens a few hours prior to the event you are attending so you have enough time to set up your equipment. The most important component to a successful tailgate party is to bring food and beverages to share with your friends and family. Typically, food is cooked on portable propane grills that use 16oz propane tanks to reduce weight. It is a good idea to do as much as you can beforehand so you don’t spend the entire time cooking.

The most popular foods for tailgating are hot dogs and hamburgers because they’re quick to make and almost everybody will enjoy them. When it comes to preparing the food, do not do too much, just use salt and pepper on the burgers and leave the hot dogs plain and let your friends choose their condiments.

Another option is tacos, which are an easy way to showcase your ability to host a great tailgate by assembling a table of taco condiments so everyone can enjoy a taco of their choice.

When it comes to beverages, keep it versatile. Bring soda, beer and water and if your friends want something in particular, have them bring it so you can save money. The best idea is to put your drinks in a cooler filled with ice before you arrive to make sure they are cold. Ideally, you should get a 52-quart cooler, but don’t waste your money on a dedicated fishing cooler because those are more expensive. Since tailgating starts in the early afternoon, you may not want a beer. Instead you can prepare a cooler with a faucet and fill with bloody mary mix and extra hot sauce or celery next to the cooler for the perfect early afternoon drink.

Something that is commonly forgotten at tailgate parties are chairs. Since you’ll most likely be tailgating for a few hours, you’ll eventually want to take a seat. The best chairs to get are the foldable ones because they are cheap and portable. If you are outside tailgating for a long time, it would be a smart idea to pack sunscreen and an umbrella because the average person can get mild sunburn within 15 minutes of being in direct sunlight. With all the cooking going on, it doesn’t hurt to bring a mini fire extinguisher. Even though you may not need it, someone else might.

Tailgating is a party, but that doesn’t mean there aren’t rules to it. Part of having a successful tailgate party is to be mindful of your surroundings and your own health. An unwritten rule is to show respect to others. If you want to tailgate before a Yankees versus Red Sox game, no matter how much you may disagree with the opposing fan, keep your calm because fights will ruin the entire tailgate.

Cups and utensils are key, but glass beer mugs, wine glasses and metal forks and knives can be left at home to avoid broken glass or possible lost utensils. Some good alternatives are plastic utensils and plastic cups.

Once you are finished grilling, make sure your propane tank is turned off and store it as far away from others until you are ready to leave. Never keep a propane tank in a hot car because it can explode.

Moderation is key as well. It’s not a good idea to be intoxicated before the game or concert because security will not let you in and your tickets will be a waste of money.

Just because there are other fans around you, doesn’t mean they are automatically your friend. Avoid taking drinks offered from other fans, especially if they are already open.
Remember to play appropriate music as a majority of music that is popular has explicit language, which may be offensive to others. If you’re going to play music, play the clean version.

Keep an eye on your children at all times as there are many other people tailgating and some of the other fans may be acting inappropriately or could be using illegal substances.
The last component of a successful tailgating party is to clean up after yourself. Bring a couple of garbage bags, one for recycling and another for trash—it’s not the venue employee’s job to clean up your mess.