If you’ve seen Law & Order, you might have noticed detectives sipping a good ol’ cup of joe in a fancy looking cup while walking the streets or in the office. But did you know that cup has a deep local history?

For more than half a century, the Anthora, with the words “We Are Happy To Serve You,” has been an iconic coffee vessel and a staple in the daily life of New Yorkers. Its creator, Leslie Buck, long-time resident of Syosset and Glen Cove, has since passed away in 2010, but his legendary coffee cup design has stood the test of time.

Laszlo Büch, born in 1922 to a Jewish family in Khust, Czechoslovakia (now modern day Ukraine), came to New York as a World War II refugee. He survived concentration camps at Auschwitz and Buchenwald; his parents were killed by the Nazis. Upon arriving in New York, Büch Americanized his name and began running an import-export business with his brother.

In the late 1950s, Buck and his brother started Premier Cup, a paper cup manufacturing company in Mount Vernon. In the 1960s, Buck joined Sherri Cup Company in Connecticut.

“The pseudo Greek lettering ‘We Are Happy To Serve You’ and three steaming cups/saucers of coffee finished the simple yet elegant product that became a tremendous success,” said Buck’s son, Robert.

In 1963 while working for Sherri, Buck designed the paper cup to appeal to coffee shops in New York City, many which were Greek-owned.

“The impetus for creating the Anthora cup was to go after the diner business, a major source of takeout, paper hot cup business in the tristate area,” Robert said. “A bunch of the design was done at his home office. Blue and white colors, for the Greek flag. I remember checking our encyclopedia for the name and a picture of the classic Greecian urn, amphora. Anthora is a play on that word. The upper and lower borders are a ‘Greek key’ ramble.”

More than 30 years later, sales of the Anthora had peaked reaching upwards of 500 million cups, with hundreds of millions of cups being produced annually.

The Anthora coffee cup is featured in television shows and movies that are set in New York such as Goodfellas, The Sopranos, Brooklyn Nine-Nine, Friends, How I Met Your Mother, the Law & Order franchise, and many more.

“It feels good seeing it [the Anthora] on TV or a movie, even though it’s been decades, since their heyday,” said Robert. 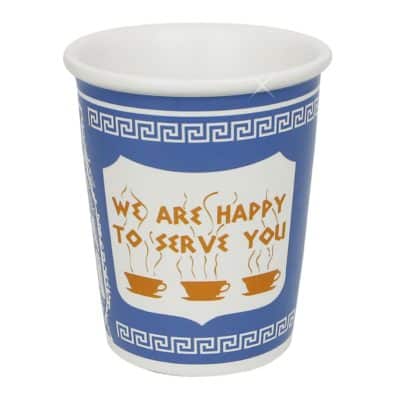 Some have called the Anthora a pop-culture ephemeral emblem, as recognizable as the Statue of Liberty.

“I had the honor and pleasure of working with him for 15 years,” said Robert. “I also watched his hard work and creativity, since I was a child, that led to his success in business.”

Buck retired from Sherri Cup Company in 1992. He never made royalties from his design.

“It’s been nearly a decade since his passing, but he’s still greatly missed and in my heart and thoughts,” said Robert. “He was a great father, husband and grandfather; his wisdom, humility and easy-going nature was greatly admired.”