If granted approval by the Town of Oyster Bay Town Board, the mixed-use project will erect 625 housing units on the 92.8-acre site. The project’s Draft Environmental Impact Statement (DEIS) estimates that the housing will bring in 1,607 residents and, at full build-out, will contribute $12 million in property taxes to the district.

How the project will impact the Syosset School District was the subject of much discussion at the May 1 public scoping session held at Syosset High School and attended by more than 700 people.

The district itself has hired outside consultants to study the DEIS and asked the town for an extension of the comment period to Aug. 31 from July 31 in order to have its say, which the town granted. Earlier this year, district Superintendent Thomas Rogers called for an independent evaluation and testing of the site, and expressed concerns about the impact of the construction activities on adjacent South Grove Elementary School.

Davis (CD) and Gutleber (JG) weighed in on the issues that pertain to the school.

The DEIS estimates that Syosset Park will bring in 243 school-age children. The school district’s consultants, using the same population estimate, first put the enrollment numbers at 355, later revised to 381. At a presentation at a May board of education meeting, this figure was split into high school (38), middle school (76) and elementary school (267). Even if it accepted the developer’s figure, the presentation noted, “insufficient elementary school capacity exists.”

CD: “We didn’t understand what the district’s methodology was until December or January, when we had discussions [with the school district]. We’re not going to dispute their methodology. It’s unique. It’s different. It’s not something that people have done before. There is no reason for us to refute it.” 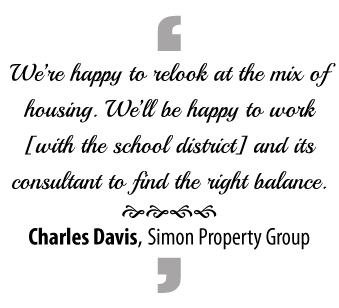 “It won’t be 1,000,” interjected Gutleber, referring to estimates at least one of the speakers at the May 1 meeting had put forth.

Anton Media Group: “You don’t believe the district needs to build another school?”

CD: “Not another school, but we already had this discussion with the school district. They had done some planning studies to add six additional classrooms to South Grove, and actually use funds that we would create for them to modernize and upgrade a facility that the parents have complained is decrepit. So in a strange way, we would actually be the tool to improve the school district.”

JG: “The initial reaction of district was positive to us. They were anticipating closing schools…and enrollment [was] going down.”

CD: “New families are buying up empty-nester homes, so the school district is seeing a bump in [early grade] enrollment. That’s how their consultant was able to come up with that [initial] 355 number. They said, ‘We’re seeing a higher share of new kindergarteners and first graders relative to those born here five years ago.’ ”

Added Davis, “If you have a top 100 school district in the country, people are going to want to relocate there. Every parent wants that.”

Asked if he had talked to school district officials since early in the year, Davis indicated that the district wants its experts to study the DEIS thoroughly before further exchanges.

“We’ve been open with them, and we’ve been open with the neighbors who want to listen,” Davis said. “The town originally told us, ‘No apartments.’ If there is an openness to maybe having half [of the housing units as] apartments, we could do a lot more one bedrooms so we don’t have [as many] kids. Are we open to some age-restricted [housing]? Sure, we’ve said so the last six or eight months.”

Davis concluded, “We’re happy to relook at the mix of housing. We’ll be happy to work with [the school district] and its consultant to find the right balance.”

The DEIS notes: “The applicant is committed to working with the school district to evaluate and plan for potential capital facility needs as the proposed project is built out over time, to meet the needs without disrupting the existing school district curriculum and standards, and to see the actual tax generation impact over time for the Syosset CSD.”

Davis said the DEIS figure of $12 million in estimated property taxes going to the school at full build-out is “based on the assumption that the last house would not sell until 2025.”

As far as seeking tax abatements in the form of payment in lieu of taxes (PILOT) from the county’s Industrial Development Agency (IDA), Davis said this will be true for the second hotel (an extended stay model), and the project’s office building component.

“And they were not factored into the $12 million,” he emphasized.

JL: “We’re not looking at the PILOT for the residential or the retail.”

CD: “We won’t build an office building without a PILOT. Because if you look at Long Island, no new office has been built without a PILOT in a decade or more.”

He added, “At the end of the day, the $12 million is still generated on the rest of the project that’s not [subject to a] PILOT.”

CD: “When we did the original market analysis—we did the application in August 2015—the projected price range [on the housing] was mid-400s to mid-700s. Needless to say, Country Pointe in Plainview is $300 to $400 thousand higher for similar housing. Our taxes are based on the original $450 to $750 price range for homes that are going to sell for probably 50 percent or higher more.”

Davis noted that the tax generation potential is higher for this mixed-used project. The state-mandated property tax cap is 2 percent per year or the rate of inflation (whichever is lower). But state law has what he called a growth factor “that says if your pool of taxpayer grows, you have the opportunity above and beyond the 2 percent to tap into that to recover the costs of [educating] additional students.”

He added, “Not discussed in the DEIS was the mechanism for capital investments in the school to increase capacity to house kids, which we’re open to. That’s part of the negotiation with the school district, to find the final solution.”

The DEIS concludes that whatever the cost it will take to educate the influx of new students—including the much higher per pupil expenditures for special needs students—the property tax generation will be more than enough to cover it.

Though the Syosset School District has not yet weighed in on the DEIS, in May, officials expressed reservations about the $12 million figure, and stated that the capital costs of building extra classrooms to accommodate the new students from Syosset Park was $17 million.