Rachel Feigelson was named as one of Yahoo! Finance’s “top entrepreneurs of 2020 who have disrupted the status quo.”
Read more
Columns

On March 27, the Town of Oyster Bay Town Board officially accepted the project’s Draft Environmental Impact Statement (DEIS), beginning the comment period as part of the state-mandated environmental review. Residents can comment on the DEIS through Aug. 31. The town and the developers have also agreed to have environmental testing done at the 92.8-acre site at the corner of Miller Place (Long Island Expressway North Service Road) and Robbins Lane in Syosset. About 39 of the acres once housed the Cerro Wire industrial site, while a similar area was a town landfill for decades. Both sites were subject to toxic contamination and the state and federal environmental agencies declared that both had been remediated. But bowing to public pressure, the town has agreed to hire an outside firm to conduct what concerned citizens have labeled as an “independent testing” to determine if the neighboring areas have been affected by the contamination. The developers have agreed to pay for this further testing.

Planned for the mixed-use site are 625 housing units, office and retail space, two hotels and—over the capped landfill—a park that will include playing fields and, once developed, will be given back to the town. The developers, in seeking the necessary zoning changes and town approval, hope to have the proverbial “first shovel” in the ground before the end of next year.

On May 1, residents attended a public scoping session to watch a presentation by the developers and comment on the project’s DEIS. Held at Syosset High School, it drew more than 700 participants and the overwhelming sentiment of those who spoke was against the project.

Anton Media Group asked Davis (CD) and Gutleber (JG) about their reaction to the May 1 meeting.

CD: “My sense was that people came in and they already had messages they were going to give regardless of what the DEIS actually said. And I think also that there was some real fear instilled. And I don’t blame people for being afraid, given the proximity to a site that has a checkered past. We have the same concerns. We’ve spent the past five years in technical studies, researching the state and federal [reports] and having an independent assessment [done].”

JG: “We don’t think the people that spoke at the meeting even know what’s going on at that property even now. And there [should] be more concerns…” 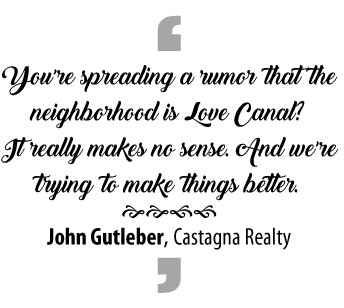 Both men referred to the activities at the town’s Department of Public Works (DPW) site, which eventually will be transferred to the developers. They noted that, after Superstorm Sandy, the town dumped “piles and piles” of materials at the site, which sits partially over the capped landfill.

JG: “Trucks were going back and forth. And the kids are right there at the [adjacent South Grove Elementary School].”

Anton Media Group: “Were people aware of the scope of this project?”

CD: “It was an eye-opener. There was a whole audience there, none of which had attended our previous meetings. I will say this very bluntly. You’re telling people that your children are at risk because of something under the ground there. It has nothing to do with what our project is, but it certainly painted for them a reason to be fearful.”

Asked about outreach, Davis replied, “We had extensive outreach in the spring and summer of 2015. We held five open house-style community meetings. One was attended by over 700 people. We sent out 3,000 fliers to people who live within one and a half miles of the site. Our last open house was the last week of March at the Milleridge Inn and only 75 people were there. That was rescheduled because of a snowstorm, but we had sent out 5,000 fliers.”

Davis said his company was challenged, during the outreach meetings in 2015, to defend its proposal, and observed that his response was, “We will spend the extra time and money in the DEIS to make sure we’re obligated to study those things.”

He added, “So whether or not [critics of the project] choose to believe the facts…there are exacting standards that the state puts on people who do these studies. There are licenses for professionals who do this work. [Documents] are critiqued and reviewed before [being] made public. That’s where this trust in government and trust in processes [comes from]. If you don’t trust them, we can’t help you.”

JG: “The other thing is, those people live there and they’re calling their property ‘Love Canal.’ You’re spreading a rumor that [the] neighborhood is Love Canal? It really makes no sense. And we’re trying to make things better. The conditions, if we walked away [from this project] tomorrow, is still there. If you think it’s Love Canal, you’ve got a problem. And if you keep on talking about it, you’re not going to be able to sell your house. The school district is going to go down because the value of the homes is going to go down. It’s self-defeating.

Davis said there were suggestions made about building on the landfill cap, but his reaction was, “No, we’re not puncturing the cap. What’s underneath the cap needs to stay there. It’s being monitored by the town and the state. That’s their obligation. That’s never going to change.”

Davis and Gutleber contrasted a 30-acre park as a better alternative to the town’s DPW and its attendant activities. 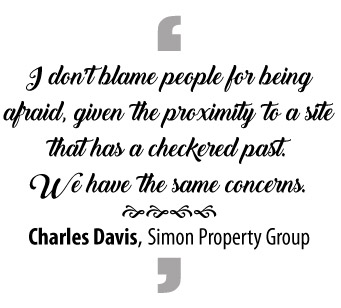 “The cap is covered with soil and asphalt because the town knew it would be using it for the DPW,” Davis observed. “They built it to a higher level of strength.”

On the proposed park itself, the trees will be “mounded” so that the roots won’t penetrate the cap. The plan is to plant tree species that don’t have invasive roots.

“That’s why we hired the landscape firm we did because this is not the first time they’ve worked on environmentally challenged sites,” said Davis, who added that there is a 20- to 25-foot buffer around the cap area to the border, where trees can be planted along the perimeter.

“We’re looking very strategically [at the proposed park] with engineers and geologists,” Davis said. “The EPA also has to sign off on our plan. ”

Added Gutleber, “The park becomes an amenity, not just for the project, but for the whole community.”

Previous articleFrom South Africa To The Bowery, Jeff Jaffe Centers On Art
Next articleResidents And Politicians Up In Arms About NRA Gun Auction Fundraiser