Growing up on the small island of Kaua’i in Hawaii, actress Kaliko Kauahi always knew deep down inside that she wanted to become an actress. After deciding to take a leap of faith to pursue acting and leave the small island, Kauahi can now be seen playing the hilarious oddball Cloud 9 employee Sandra Kaluiokalani in NBC’s hit comedy Superstore, for the past five years. The show follows the lives and antics of a group of semi-dysfunctional employees who work at a fictional big-box store in St. Louis, MO.

“I think I deep down always wanted to do it,” Kauahi said about becoming an actress. “We really didn’t have theater where I’m from. I actually come from a small island, but we would go to the movies, which was a few towns over when we could. My parents always took us when they had the chance. I think that love of entertainment started early. I come from a family of musicians, although I’m not very musical. I fake it, but I don’t actually play the ukulele. It’s always a challenge when it’s in the script for the show. So I just put it [becoming an actor] off for a long time because like I said I’m from a small island, so it’s not really practical to say that I’m going to be an actor. After a while, I thought it’s now or never and to give it a shot. I did it pretty much the traditional way I’d say. I took classes and trained, and then I started auditioning for small parts and got really lucky. Eventually years and years later, I actually ended up auditioning for Superstore. When I read the script, it was initially so funny, which truthfully doesn’t happen enough as you’d like. I was excited to read for it and got lucky enough to be in the second episode ever. They needed to expand this crazy Cloud 9 family and so I was there in the beginning and so happy to be here at this point.”

So how would Kauahi explain her character Sandra?

“In the audition breakdown description all it said was ‘sad sack plain Jane’ and that was it,” she said. “I was like ‘Perfect. I’m ready to audition sir.’ So everything that we have come to know about Sandra has come over five seasons. As much as it’s been a revelation to the viewer watching it, it’s the same for me when I read the script and they introduce a new side to her personality that I didn’t know about and we just go with it.”

Superstore is currently in its sixth season and with the coronavirus pandemic still ongoing, it is a major part of the new season and also behind the scenes when it comes to filming.

“We certainly have to adjust to all the new rules and safety protocols, so in the beginning it was new and definitely a learning experience,” Kauahi explained. “At this point, we’re several episodes into our season and it has become very routine and I feel very safe. I do think it helps that we’re in season six where I’ve worked with all of these people including cast and crew for five years already, so we know each other and care about each other deeply, and want to keep everyone healthy, safe and also employed.”

Even though the show is a comedy, it also deals with ongoing issues that occur in real life such as illegal immigration, workers rights and the as mentioned coronavirus pandemic.

“I feel so fortunate to be on this show, and the writers do such a great job of telling these issues, but never being too heavy-handed with it or preachy,” Kauahi said. “We’re always comedy, so our main goal is to tell a great story and hopefully make people laugh. The writers are able to incorporate things that are happening in our current life—even a pandemic—and try to find the humor in it and try to make it relatable.”

In the season six premiere, which aired in late October, the premiere took viewers through the first few months of the pandemic and how the store and its employees were coping and working. The mad dash for toilet paper hoarding, the need for face masks for employees as well as the debate between what’s real and what isn’t about coronavirus were all featured.

So what can viewers expect to see for Sandra during the rest of the season?

“Well I think with my character and all the other characters, we’re just going to dive a little deeper into everyone’s story and their lives, and certainly with the backdrop of the pandemic and everything else going on,” Kauahi explained. “A much deeper glimpse into our personalities for sure, but she’s also a mom now. So we get to see that side of her and how much of a mama bear she is. I think we’re going to look at her view on how she’s dealing with the pandemic. This has brought up so many things and people have different comfort levels with it and how you relate to people and interact with them. So you’ll see how she’s dealing with that all.” 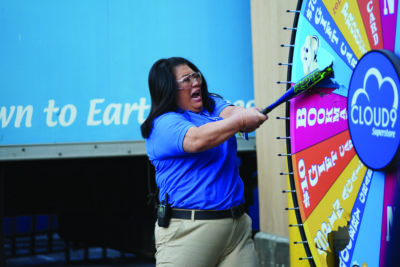 And with the cast being close on-screen, Kauahi said they are just as close off-screen as well, something she said she’s lucky to have.

“What I love is that I can say that and it’s not a lie,” she said. “We really are friends and we enjoy each other’s company. It has made working on this show even better than you could have imagined. We all happen to be working, but we have so much fun everyday with each other. It’s great that they get to mix it up and we get to work with different characters each week. We get busy during our shooting schedule, so we don’t get to hangout as much outside and obviously now with COVID. We really do have the best time, I’m so lucky to work with the best people.”

Filming a sitcom such as Superstore that involves lots of improvisation, bloopers are bound to happen. Kauahi recalls one particular blooper that involved a beehive and some imaginary bees.

“There are so many,” she laughed. “It’s hard to narrow it down. I think it’s all the stuff that doesn’t make it, is funniest to us not to the audience. I had to shoot an episode early on where I get attacked by a bunch of bees. I knocked down this beehive and it explodes, so I had to pretend that I got stung by 100 bees, but obviously there were no bees. I had to do that over and over again on the back lot and fall on the gravel. It felt strange, but it’s sort of the moment that even crew members to this day will bring up. For them it was so much fun and I’m like, ‘Great. I’m glad you enjoyed me flailing about and falling on the ground.’” 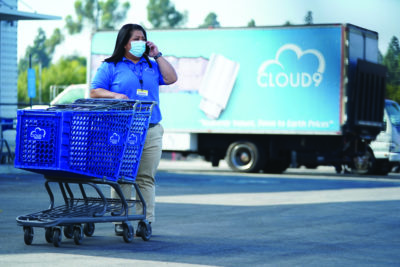 And with more than 100 episodes of Superstore, Kauahi said that her favorite episode to film was her character’s wedding episode.

“I never thought that Sandra would get married, so that was kind of a big event for her and for me,” Kauahi said. “I hadn’t thought about it that way and a friend of mine said that Sandra is getting married; that’s a big deal. They made a special dress for me and it was a big to do, but it was a lot of fun.”

So what is next for Kauahi for the remainder of the year and into next?

“Currently, this is the only show that I’m working on,” she said. “Typically during our breaks you try and do other projects, but this has been a strange year, so nothing is normal. I’m just so happy to be on this show and be continuing into 2021.”

You can watch Superstore Thursday nights at 8 p.m. ET on NBC.