Summer At The Garden City Hotel 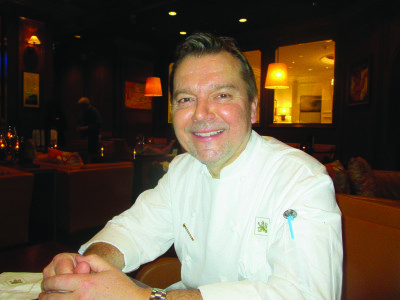 Ari Nieminen, the new chef at the Garden City Hotel, has created a three-course prix fixe dinner for $35, which, it is hoped, will attract those who might think dining at the hotel requires taking out a second mortgage.

Of the three appetizer choices, we decided upon lobster bisque and a salad of young greens. The bisque was light and loaded with satisfying chunks of lobster. The “bowl” for the salad was made of lengthwise strips of cucumber and presented with a Parmesan tulle on top. The third choice was Caesar salad. Our main course choices were roasted organic chicken and braised short ribs (they also offer pan-roasted salmon). A side with the chicken was risotto made with grains not typically found on local menus: sorghum, a grain widely cultivated in Australia and Africa, and freekeh, wheat that originated in Arabia and North Africa. 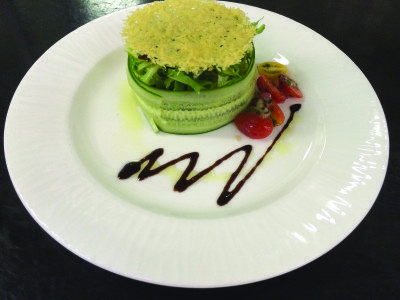 Nieminen likes to stay close to origins in his cooking and keeps health in mind, a result of his having grown up in Finland, 100 miles north of Helsinki, where, he said, “There are pristine lakes and forests and the food is very natural.” The family had a farm and he fished and raised animals. He went on to graduate from the Culinary Institute of America, becoming head chef at the Four Seasons Hotel in Manhattan and also worked at Brooklyn’s River Café with David Burke. 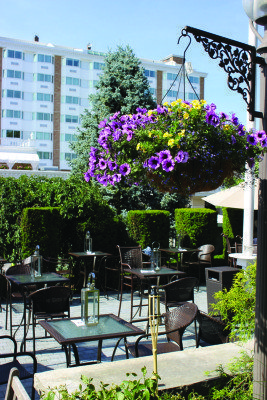 Another place to enjoy the food and hospitality of the Garden City Hotel is its Patio Bar, tucked into the hillside between Seventh Street and the hotel entrance. The bar is open at 4 p.m. from Tuesday through Saturday and offers a bar menu that includes items such as fish tacos, lobster sliders and steak bites. A featured cocktail is Pineapple Infusion—Svedka Clementine vodka and fresh pineapple infused for 24 hours. The pineapple, a symbol of hospitality since the explorations of Christopher Columbus and the early days of the American colonies, is the logo for Garden City Hotel.

In 2015 the hotel underwent a $35 million renovation of its 273 guest rooms and suites so if you over-indulged on the Pineapple Infusion, there will probably be a lovely room waiting for you to spend the night.