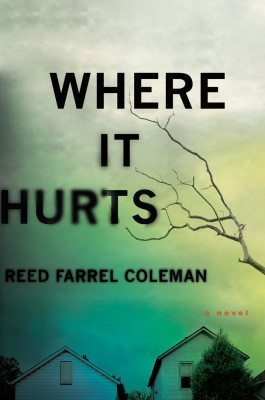 “The timing of this couldn’t be better for me,” Coleman said, as he prepares for a book tour which starts on Tuesday, Jan. 26, at 7 p.m., in Lake Grove, his hometown. The Coney Island native will mark on that day the publication of his 23rd book at Smith Haven Mall’s Barnes & Noble. Coleman is also in New York on Thursday, Feb. 11, at 7 p.m., at The Mysterious Bookshop, 58 Warren St., in lower Manhattan.

“A crime writer’s job is to take what happens in life, and supply his or her own explanation of why it happened,” Coleman stated, acknowledging portions of his fictional work were inspired by former Suffolk County police chief James Burke. Burke was indicted in December 2015, stemming from an incident in which he allegedly assaulted a suspect who gained access to Burke’s duffel bag. In Where It Hurts, Jimmy Regan is the Suffolk police chief who has a checkered past performance chart.

Gus Murphy, Coleman’s protagonist, is a retired Suffolk County police officer whose tranquil life in Commack is upended by the sudden death of his teenaged son, John, who died of an undetected heart defect. Murphy’s marriage dissolves soon thereafter and his relationship with his daughter becomes strained. Near the start of Where It Hurts, readers learn Murphy is living in Bohemia at a hotel for whom he drives a courtesy van to, and from, MacArthur Airport. Murphy’s investigative instincts reappear, and his mourning subsides, after a father and his adult son are murdered in separate incidents. One thing he quickly learns is his former Suffolk County Police Department (SCPD) colleagues are in no rush to find the murderers of either Tommy or TJ Delcamino.

“Goodhearted, diligent people make for a safe and stable environment in which to raise a family, but they make for boring crime fiction,” Coleman wrote, in an author’s note at the end of Where It Hurts. In that same missive, he praises the SCPD personnel with whom he has crossed paths. Lest anyone think the novelist has an inside source, no one in his immediate family works in law enforcement. His wife, Rosanne, is chief occupational therapist at Western Suffolk BOCES and their 20-something-year-old children reside in Brooklyn. Kaitlin, a Hunter College alumna, has her own cat-sitting business and Dylan is a personal trainer and an illustrator, having graduated from the Fashion Institute of Technology (FIT).

“I spent a lot of my life not trying to be a writer,” Coleman continued, explaining it was an adult education course at his alma mater, Brooklyn College, which got him hooked on crime fiction in the late 1980s. “It took me two-and-a-half years to write my first novel,” he added, referring to Life Goes Sleeping. It was published in 1991 by Permanent Press, in Sag Harbor.

Before finding success as a full-time author, Coleman was a waiter, an oil truck driver, and a freight forwarder at John F. Kennedy International Airport. These days, he’s winning rave reviews from bestselling novelists, with Lee Child calling him “one of the greatest voices in contemporary fiction.” Child’s most famous character, Jack Reacher, was played in a 2012 motion picture by Tom Cruise. Will Hollywood want to do a film adaption of Gus Murphy? Coleman says that will be for others to decide.

“I devote my energies to writing the best book I can write,” Coleman said.