Steak Is For Lovers 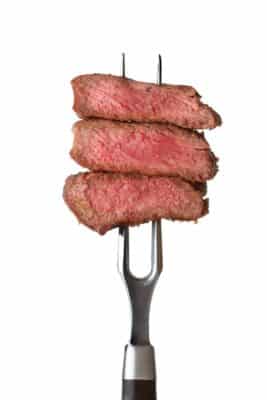 The uncut legend of big, beefy slabs of succulence

At some point in human history, one of our loincloth-wearing ancestors stood confused over a roaring fire with long-lost ancient thoughts dancing around his head—“what is this glowing magic and do I have anything I can stick in it?”

If he was lucky, that cave-dwelling hero had more than a few slabs of beast on hand to thrust into the burning heat. And what went in as raw, tough to digest, cold carnage, would be transformed into the basic approximation of what we know today as steak. Plenty has changed since that fateful day—and we likely boast more seasoning options than he did—but to this day there are few food pleasures that hearken back to our primeval origins than fire-kissed steak.

The House That Steak Built

The classic steakhouse order—steak, potatoes, creamed spinach and a stiff drink—have barely changed at all throughout the last century. Sure, other sacrilege menu accouterments like mashed cauliflower or parsnips have sneaked onto the menu, but by and large that time-tested order is still readily available. Americans still herd themselves to these establishments, regardless of any doctor’s order of “you need to eat less red meat.”

And never mind if the steakhouse is an upscale restaurant with white linens and (for some reason) an all-male wait staff or a neighborhood favorite that still rocks the same decor from 1970s—the American institution that is the steakhouse and its most popular menu item is and will forever be a status symbol that we all strive to attain at one time or another. 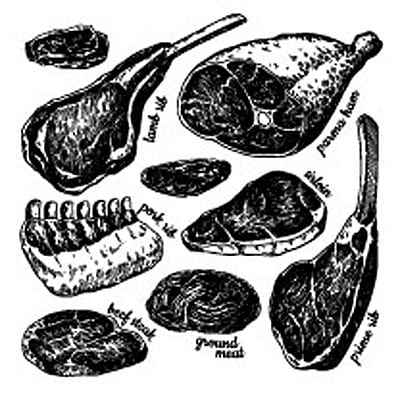 The first eateries that can be linked to what we call a steakhouse originated in New York City in the mid-19th century. These two supper club-type places—chophouses and beefsteak banquets—served meat of varying quality to clientele that ranged from the politically connected upper crust to the blue collar working man. Beefsteak banquets were for men only and essentially served as fundraisers for elected officials. They served beef tenderloin with slices of white bread—though no one actually ate the white bread.

Chophouses, on the other hand, served local merchants and anyone else in need of a hot meal. These were dimly lit establishments, with sawdust piled on the creaking wooden floors and a thick haze of smoke forever billowing overhead. There were, indeed, beefsteaks on the menu, but also thick strips of bacon, lamb kidneys and mutton chops, along with baked potatoes and plenty of warm ale.

But times changed and as society grew more civilized, so did its steakhouses. In fact, some of the oldest restaurants operating in the country are steakhouses. The Old Homestead of the city’s Meatpacking District started serving charcoal broiled strip steak nearly 160 years ago and is still going strong today. And that’s not the only long-standing steak hall in New York—there’s also Keens Steakhouse, The Palm, and, of course, the legendary Peter Luger in Brooklyn.

Most steak aficionados say that there are only two ways to enjoy a steak—rare and medium rare. While I personally agree with this assertion, if you are the type of person who prefers medium-well or (gasp) a well-done steak, I’m not going to agree with you, but I will defend your right to destroy a beautiful piece of meat with your wrongheaded temperature requirements. God bless America.

A quick dip into the world of Internet research renders multiple answers to the question, “How many types of steak are there?” So instead of seeking to answer a question that no one asked, let’s instead examine the top five most important cuts of steak.

Perhaps the manliest of steak cuts, this marbled and moist gem of the steer owes its rich, intense flavor to the intact rib bone. This particular cut is a bone-in rib-eye steak that is so big, you can easily feed two or more people with it.

This cut is so true-blue American that it’s hard to picture the American flag without picturing it eating a T-Bone steak. (Am I the only one that pictures that?) That T-shaped bone separates the strip and the tenderloin muscles.

The same cut as the T-bone, but it contains a larger portion of filet mignon due to its position on the cow. Many steak lovers hail the porterhouse as the perfect cut, as it brings together the strip steak and tender filet in carnivore harmony.

This slab is cut from the cow’s diaphragm. This is a true “steak lover’s steak” in that while it is not particularly tender, it is one of the most flavorful bites on the entire animal. Any steak maven worth their salt can transform the skirt steak into a culinary dream.

Steak Out On Long Island

A proper steakhouse goes all out with refinement—white linens, accommodating staff, classy cocktails, and, of course, classic cuts of finely seared or grilled steaks. For your next fancy night out, pick one of the below restaurants for a meal that is a cut above the rest.