For most casual music fans, Spoon is a utensil that you feed yourself with and not a wildly inventive band that calls Austin, TX, home. But ever since releasing its 1994 EP Nefarious, this four-piece has carved out a solid place as cornerstones of the alternative music landscape for the past two decades plus. Led by founding members Britt Daniel and Jim Eno, Spoon has released a string of solid albums with the latest being Hot Thoughts, the band’s ninth studio outing that dropped earlier this year.

With a sound that had them being compared to Sonic Youth and Pixies early on, Daniel and company have evolved to become critical darlings who have incrementally built their success working with indie imprint Merge Records even as the music industry has imploded on the backs of an antiquated model that yoked artists to a major label plantation system. It was an experience Spoon briefly endured when the band was signed to Elektra Records, which released the band’s sophomore bow, 1998’s A Series of Sneaks and one that Daniel does not have fond memories of. 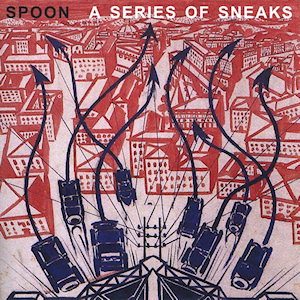 “We had zero success on a major in terms of selling records or even making an impression on the people at the label. We were dropped less than four months after the record came out. It was not an easy time. The only good thing that came out of that time is the record itself, which I think is quite good and was a real step up for us in terms of the sound we were working with, compared to the one before and the song quality too, I think,” he explained. “Ironically, as soon as we got off that label and went to Merge, a pretty small indie, we started having a lot more success. And every record we put out there after that, it sold two, three, four or five times more than the one before. It’s not the way it’s supposed to work, but it worked that way for us.”

For Hot Thoughts, Spoon is back with Matador Records, the indie label juggernaut that released the band’s 1996 debut, Telephono. This go-round also reunited the quartet with studio mastermind Dave Fridmann (Flaming Lips/Mercury Rev), who lent his production touch to 2014’s They Want My Soul. Not unlike a Reese’s Peanut Butter Cup, it wound up being two great tastes coming together for Daniel.

“I probably wouldn’t have predicted [re-signing with Matador] myself but the way we make records is that we record [them] and then figure out who is going to license and put it out. This time there were a few people that wanted to put it out and Matador made the most compelling case. It’s surreal to be taking meetings with these guys who I was taking meetings with 20 years ago. But it’s good. We’re in a different place and they’re in a different place than where they were, so it’s a cool thing,” he said. [As for Dave], he brings a lot of technical knowledge and a lot of attitude. The guy has had hit records, but the last thing on his mind is trying to make a song for the radio. He knows what makes a pop song works and he knows how to tear one apart at the seams and he just does a little of both in everything.”

The end result is 10 songs that have a funky edge wrapped in an ethereal ambiance. Jagged riffs and Middle Eastern-flavored synthesizer washes inform the exotic “Can I Sit Next To You” while Eno’s solid backbeat puts a substantial imprint on the sinewy “Do I Have To Talk You Into It.” Elsewhere, the dream-pop briliance of “WhisperI’lllistentohearit” rumbles with the kind of jittery insistence that sounds as if bassist Rob Pope is channeling Peter Hook. Daniel even gets Spoon to dip into the late 1970s disco-meets-rock dalliances that artists from the Rolling Stones to Kiss dabbled in via the thumping underpinning and pulsing beat of the herky-jerky “Shotgun.” It’s an end result Daniel is pleased with, given what his band had been working on during the past few releases.

“We wanted it to be a record that sounded like the future. We didn’t really verbally describe the direction we were heading off into. The last track we recorded on the album before was something called ‘Inside Out’ and it was probably my favorite song on the record. It was my favorite song to do live and I’d say it was a good jumping-off point for what we did on this one,” he said. “It was sort of a soundscape-type song with a lot of instrumentation and it has maybe three solos in it. The trick is to have solos, but not have them be boring and have them actually do something more than just vamp. We set off in that direction. What we made on this album is a rock record that doesn’t have a lot of guitars, so we were kind of pushing ourselves in that direction without really talking about it.”

Currently on the road, Spoon has been alternating between headlining gigs and taking part in music festivals like New York City’s Panorama Festival. For someone who loves to play out as much as he does, Daniel’s preference leans more towards performing indoors.

“When we play a festival, it’s often bright daylight out. People have fun like that, but it’s not quite as an intense experience as a headlining show. I just saw PJ Harvey in Louisville, KY, because she played the same festival as us. And she played at about 5 p.m. and it was just blazing hot sun. I was thrilled to see her, but I know it would have been about 10 times better indoors at night. In a festival, we won’t play as long, so we’ll just play the hits or what we think the hits probably are,” he said. “If it’s a headlining show, we’re usually indoors, there’s lights and focus. I like playing indoors and I like the sound of it and it gets dark and all your visual focus is in one place. The sound is nice bouncing off the walls and we get to play more in-depth songs.”