Spirituality Through The Camera’s Eye 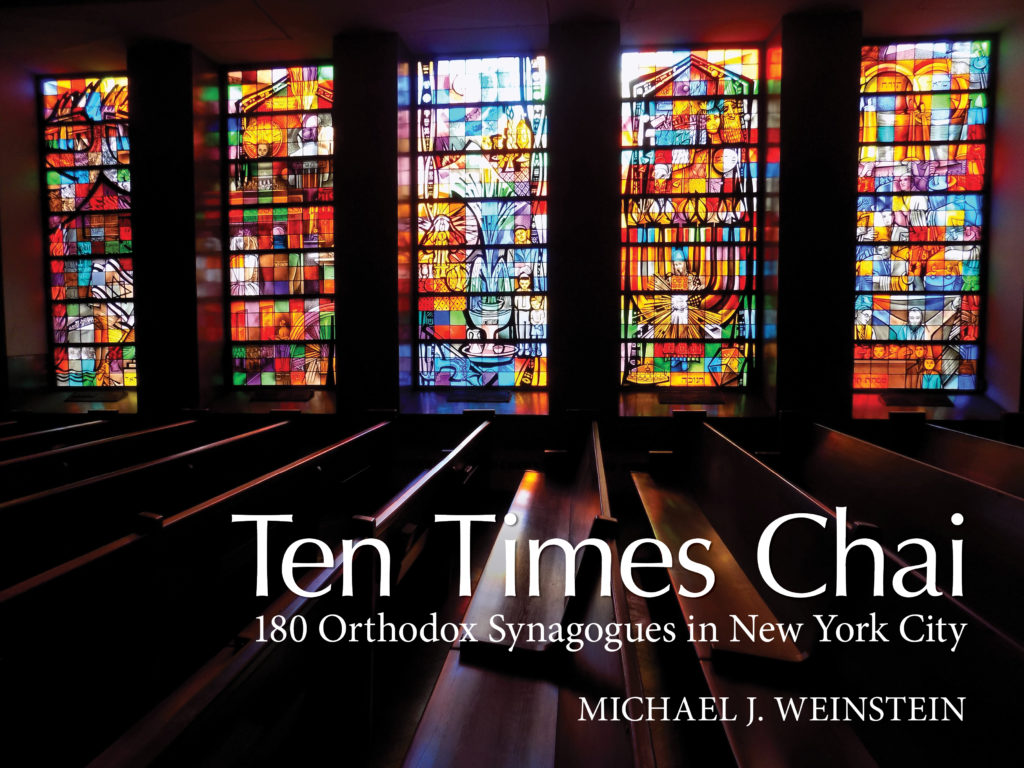 Chilean-American author Isabel Allende once said, “Roots are not in landscape or a country or a people, they are inside of you.” For Syosset resident Michael J. Weinstein, that search for his roots led to the publication of Ten Times Chai: 180 Orthodox Synagogues of New York City (Brown Books Publishing Group), a coffee table book replete with photos shot at Orthodox houses of worship throughout the five boroughs.

The number he came with was derived from the Hebrew word chai, which means life and is made up of two Hebrew letters chet and yod, which, respectively have the numberical values of eight and 10. The gematria or numerical value of chai is 18 and multiplying it by 10 equals 180. This culturally and spiritual journey evolved from Weinstein’s visiting Holocaust survivors in 2015 when he got started in chesed (acts of kindness) through Michael Cohen of Brooklyn and through a program called “Connect2: Friendly Visiting for Holocaust Survivors,” a project of the Jewish Community Council of Greater Coney Island.

“It’s kind of interesting because I’ve been to Coney Island as a kid along with the aquarium and the amusement park but I didn’t know there was such an organization that would help people in the same area. I joined this organization as a volunteer and to make a long story short, I visited [more than] 22 different Holocaust survivors. I’d usually go on a Thursday night or Sunday morning and I heard amazing stories from people,” he explained. “It’s one thing to watch a movie or read a book, but it’s another thing to hear a story from a survivor. I really heard some amazing stories. What happened was that along the way, I would just check out the nearby synagogue and I was really blown away by that as well.”

Even though he was born in the Briarwood section of Queens, Weinstein was raised in Jericho, went to Syosset schools and save for a brief period of time spent living in Manhattan, has called Syosset his home since 1993. But in traveling up and down Ocean Parkway during these visits into the city, Weinstein was revisiting the neighborhoods that his father, uncle, grandparents and great-grandparents lived in. Places like Flatbush, Brighton Beach, Coney Island, Midwood, Borough Park and Williamsburg. And what started out as his wanting to profile synagogues of Brooklyn expanded to encompass all five boroughs over the span of a year.

“I grew up in Jericho and there are nice synagogues in this area, but with a lot of these places, they were 100 or 200 years old. I started taking pictures with my cell phone and after a couple of months, I started wondering if anyone had done a book about the synagogues of Brooklyn. People had done history books about synagogues that are no more and neighborhoods that had changed. I didn’t want to do a history book because I felt I couldn’t compete,” he explained. “So I had the idea of doing a book that would have been 100 Synagogues of Brooklyn. Then my wife [pointed out] that I was born in Queens and we lived in Manhattan and I knew my grandfather had grown up in the Bronx. So I decided to do the whole city.”

Weinstein started out by sending emails and letters to rabbis, cantors and synagogue presidents at Orthodox synagogues in all five boroughs and save for one congregation in the Bronx that had been the subject of a bomb threat a number of years ago, Weinstein said the responses were welcoming. And given how their had been recent scares regarding ISIS potentially targeting Jewish houses of worship in New York City, Weinstein chose to only shoot interiors.

In addition, he did not photograph any visiting worshiper, congregation member, rabbi, cantor or synagogue employee as a means of protecting people’s privacy. In undertaking this project, Weinstein visited places ranging from the relatively new like Chessed L’Avraham, The Kings Highway Shul located in the Midwood section of Brooklyn that was founded in 2008 to Congregation Shearith Israel, The Spanish and Portuguese Synagogue located on the Upper West Side and founded centuries ago in 1654.

He also got to experience the diversity of the New York City Orthodox community that ranged from numerous Ashkenazi congregations and Sephardic synagogues whose members hail from Morocco, Lebanon, Yemen, Persia and Egypt to the burgeoning Bukarian emigres who have come over from Tajikistan, Uzbekistan and Soviet Georgia in the past 20 years. Weinstein even did some genealogy detective work along the way and made an important discovery about one of his ancestors.

“My great-grandparents were from Russia, settled on the Lower East Side and ultimately Brooklyn. I was able to find out where they lived in Brooklyn and during my journey, I went to one of the synagogues that I knew they lived near and I found a plaque on the wall with my great-grandmother’s name who died in 1942,” he said. “There’s a little connection. I was born in 1963, so I obviously never met my great-grandparents. I did find out where they prayed. It was kind of an interesting experience.”

Response to the book has been positive and since its release in April 2017, it’s being sold on Amazon, in numerous Judaica stores, the Jewish Museum on Fifth Avenue and the New York Historical Society on Central Park West. There was even a request to purchase a copy for the West Point archives.

“This guy wrote me from West Point and said he wanted to buy it for their Center for Holocaust and Genocide Studies at West Point,” Weinstein recalled. “He wrote that, ‘It’s a privately funded and necessary addition to the Academy for the Army and the Nation.’ He’s some officer in the military from West Point asking me for the book. I never thought it would go to a place like that. It’s kind of cool to see where it ends up.”