Long before the word “spam” became synonymous with unsolicited emails, it was the name of a highly solicited canned meat product that since its invention, was destined to charm generations of Americans—while also perplexing a few along the way.

This year marks the 80th birthday of Spam, the curious meat phenomenon with a mere six ingredients—pork, salt, water, sugar, potato starch and sodium nitrate—and a rich historical lineage that includes strong ties to the Great Depression, the U.S. military and America itself. Conceived by canned-pork-product pioneers Hormel in the late 1920s as a way to profit from pig parts previously thought inedible, Spam first officially rolled off the assembly line on July 5, 1937. 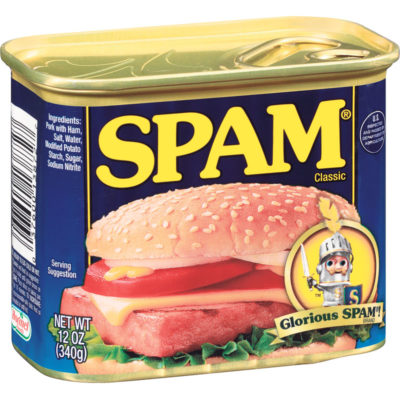 At the time of its release, Spam, a portmanteau for “spiced ham,” was the miracle America didn’t know it needed. The canning process and sodium nitrate meant it could be stored for long periods of time without refrigeration, making it the perfect protein boost for soldiers on the front lines. And its popularity among American GIs stationed in Hawaii during World War II left a lasting hint of flavor, as the product has since become a culinary point of pride on the Pacific islands with dishes like Spam Musubi—which sees the meat treat fried, pressed with rice and wrapped in seaweed.

Hawaiians love their Spam so much that there has been a recent rash of Spam thefts in the state, with criminals heisting shipments and reselling it on the street for profit. The canned crime wave has even forced retailers to keep their Spam under lock and key with limited access for customers and employees alike.

And as anyone who has succumbed to the siren song of spiced ham from a can knows, that Hawaiian crime wave is justified. The salty, mildly spiced meat made from chopped pork shoulder—perfectly funky with a faint whiff of rarely aired-out barnyard—is mainly a wonderful addition to the breakfast spread. Sliced and fried in a shallow pan, Spam crisps around the edges and the sides for a flavorful, meaty bite that is as much a superb addition to eggs over-easy as the far-more accepted bacon or sausage.

But as the nation’s flavor palate has expanded over the last eight decades, so has Spam’s product line. No longer content with the “original” product, Hormel now produces an ever-growing line of twists on the Spam formula. These include jalapeño Spam, oven-roasted turkey Spam, hickory-smoked Spam, Spam Bacon, Spam Cheese, Spam Garlic, Spam Boricua (with Puerto Rican style) and even what some might say is the height of American ingenuity, Spam Spread.

Spam even spams its way into dessert with numerous recipes, the most striking being a concoction by those purveyors of sweet rolls, King’s Hawaiian, whose website has a recipe for Spam S’mores (www.kingshawaiian.com/recipes/desserts/spam-smores). Yes, this recipe pairs Spam with marshmallows and melted chocolate—deal with it.

So, before 2017 disappears after the coming holiday bum-rush, revisit Spam. It’s the hidden and deeply buried guilty pleasure most people refuse to acknowledge—just like spam email.