While I love seeing famous sights when traveling, the best part of a trip is spending time with local people and getting to know them.

That opportunity came this summer when I participated in an English-immersion program for Spaniards called Vaughan Town, named for the founder Richard Vaughan. The town brings together Spaniards and native English speakers in an English-only environment for six days. We “Anglos” were there to provide conversation with the Spanish speakers, who already know some English. We paid for transportation, but our room and board was covered while we were in the program.

We arrived in Spain a few days before we were to meet in Madrid so we could explore the city and adjust to the time change. At the appointed day, we met our group at Vaughan Town headquarters and were whisked off to our site, a small village called Belmonte. The connecting began as soon as we stepped on the bus. I sat with Carmen, a young woman from Barcelona who is a design engineer at an automotive company. We chatted for the two hours it took to get to our hotel. Carmen said that although she felt her writing in English was good, her speaking needed to improve.

We were 10 Spanish and 14 Anglos. The Spanish came from all over the country and the Anglos from places such as New York, Florida, Chicago, Wales, England, Ireland and
Abu Dhabi.

The six days were a combination of numerous one-on-ones, group presentations and lots of fun. My first one-on-one, however, was a disaster. My Spaniard, who shall remain nameless, told me he really needed to listen better and then proceeded to talk…and talk…and talk, in endless detail about his work. I tried to keep my eyes from glazing over.

That encounter was the only difficult one and I am happy to report that by the end of the six days when he and I had another one-on-one that his nerves had calmed down, his English had improved a great deal and we were able to laugh about our first meeting.

Belmonte is located in the La Mancha region. This is Don Quixote country and from our hotel we could see a castle on one hill and three windmills on another. We had chosen the Belmonte site from a few others partially based on the look of the hotel, and we weren’t disappointed. Palacio del Infante Don Juan Manuel Hotel Spa, originally a monastery, had been cleverly renovated into a four-star establishment with marble floors, air conditioning and very comfortable beds, plus a swimming pool. Some of the original building was left in its crumbled state giving something of a feel of an archaeological site, particularly the corridor where we walked out to the pool. Angela Walmsley, from Lancashire, England, said she felt completely at ease from the get-go. “The program is exceptionally well organized, expectations of participants are clear and the small team from Vaughan provided guidance, support and a wonderful energy throughout the week,” she said.

Julian and Giovanna were our leaders. Julian, our emcee, kept us going with activities. He pulled four of us together to do a Monty Python skit. Another time we were divided into groups and told to arrange ourselves as great moments in history and great paintings, taking photos to be viewed later. Howard, the head of the Civil Liberties Union in Florida, talked about American government and handed out copies of the Constitution. I taught a few Yiddish words that are essential for anyone coming to New York, such as schlep and chutzpah. Sabera, from London, led us in a values clarification exercise. 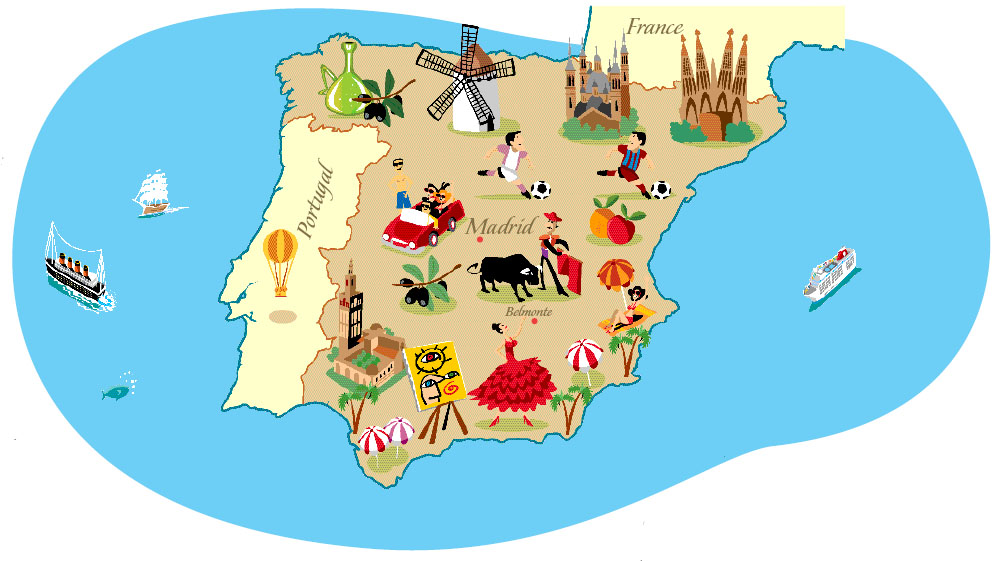 Giovanna kept us organized and on schedule. When a group of Anglos, myself included, came back late for our one-on-one from an impromptu visit to the castle, she let us know she was not pleased. “But the taxi never came back for us,” we pleaded like naughty children.

We loved getting to know both the Spanish and Anglos and at every meal sat with different people. Jacqueline and Julie were colleagues from Chicago, both teaching at the same middle school. Julie had been to previous Vaughan Town programs and Jackie joined her on this trip.

“I would not have been courageous enough to do this on my own,” said Jackie, “it was my first time participating in a program like this.” For Jackie, this trip became more than an opportunity to experience another culture. “It changed my life,” she said. Just five weeks before, Jackie had undergone a bi-lateral mastectomy and up until the last minute was not sure if she would be able to make the trip. “This was very healing for me—physically, spiritually and emotionally. I came back to the states a different person, and my friends commented on how healthy I looked and acted. The support I received from new friends—strangers prior to this—was amazing.”

Carmen and I sat together again on the bus ride back to Madrid.

“What I found there in Belmonte was higher than what I was expecting…I could meet a lot of nice people with interesting lives and very good stories to tell and this helped me be motivated and immersed in the activity,” she said. “I could improve my listening and lose my fear to speak in public.”