The concert headliner now headlining at New York Fashion Week: Men’s, is the son of the late Benihana restaurant founder Hiroaki (Rocky) Aoki, who transformed the Council of Fashion Designers of America’s (CFDA) on-site venue into an immersive and one-of-a-kind display.

In lieu of a traditional runway and models, the presentation featured an eclectic mix of skaters in 20 punk rebel ready-to-wear looks carving, grinding and tail-sliding across the installation of skateboard rinks.

Rousing an exclusive and intimate crowd of onlookers—which included fellow Grammy-nominee, hip-hop icon Fabolous, the hour-long presentation had a message that went beyond aesthetics.

“There is a new renaissance coming because of the current state of affairs and we are a part of the wave and this collection builds on the same sentiment,” said the Grammy-nominated DJ, producer and philanthropist.

“I know there are many that feel the same angst and energy, and I’m ready to express this for all of us through this collection,” said the 39-year-old entrepreneur.

Although exclusively selling in Japan for four seasons, Aoki has in the past collaborated with mega-brands such as Diamond Supply Company, Burton Snowboards, Corum Watches and Supra Footwear.

The launch, while indicative of the brand’s global evolution and popularity, is an offshoot of Aoki’s record label, “Dim Mak,” or “Touch of Death” in Chinese, referencing his childhood hero, Bruce Lee.

Despite its name, the label has catapulted the careers of musical talent such as The Chainsmokers, ZEDD and LA Riots.

“I’ve always had an affinity for the beat generation and what they stood for,” said Aoki.
The globe-trotting DJ suspects that history is now repeating itself.

“I believe that the same thing is happening now…rejection of the standard, the norm,” he said. “It’s not business as usual from fashion, business to politics.”

The music executive has spent the last decade trotting the globe, playing at every major festival and venue known to pop culture. 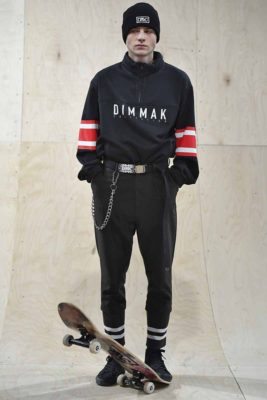 Aoki collaborated with California-based graffiti artist David Choe for the collection, incorporating Choe’s graphics and artwork throughout the collection.

Choe also performed with his band MANGCHI during the show.

“I make my own clothes and when I work with someone creative like Steve Aoki, we get to create art, music, and clothes with pure creativity and zero compromise,” said Choe, who is also a muralist.

“This to me is not fashion—it’s purely passion,” Choe said.

His designs are already currently being donned by kindred spirits and fellow musicians alike, according to Daniel Linton, DJ and producer of LA Riots, a band who received its first official remix from Aoki’s Dim Mak record label and event production company.

“Steve has always been pretty experimental with the stuff he wears so it makes sense that he has steered things in the direction that he has,” Linton said, adding that he lives just two blocks from Dim Mak’s LA office.

Linton said he has his eye on a few pieces from the ready-to-wear collection, but currently owns a few pieces of Dim Mak eyewear.

“This is a very exciting time. I’m thankful to have the opportunity to show at fashion week, where I can share my roots, my lifestyle, and what’s important to me,” Aoki said.