Whether this increased use is a result of boredom, depression or “internet” cocktail parties, the effects being seen in the medical community are dramatic.
Read more
Healthy Living

What Activities Are Safe In The Summer Of COVID-19?

We look at some popular summertime activities and determine whether they are safe or not.
Read more
Healthy Living

While much of 2020 was so-called “canceled” due to the outbreak, fun is still in the cards this summer—with safety at the forefront.
Read more
Healthy Living

How To Boost Your Immune

During a global pandemic, immune response is just as important to personal health and flattening the curve as social distancing.
Read more
TOP STORIES

A recent survey of doctors-in-training in their final year of residency showed that just 2 percent want a go-it-alone practice. Instead, their goal is to seek balance between their private and professional lives by working for someone else, such as a hospital, clinic or large group practice, according to the survey by Merritt Hawkins, a physician staffing firm and subsidiary of AMN Healthcare.

“It wasn’t always that way. A mixture of technological advances, health-insurance payment models, corporate-business models and other factors have brought drastic changes to the medical profession that have been building for decades,” said J. Joseph Marr, MD, a retired physician and author of the book Fall From Grace: A Physician’s Retrospective on the Past Fifty Years of Medicine and the Impact of Social Change. 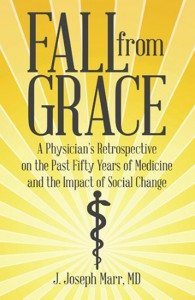 “People of my vintage went into medicine for what seemed to be all the right reasons,” said Marr. “We expected to work long hours, to be at the call of someone in distress, to sacrifice youth to gain knowledge and experience, and to sacrifice time with family to alleviate the suffering of others.”

Marr said that selfless philosophy makes it all the more puzzling why his generation of doctors allowed health care to evolve into an industry more concerned about profits and quarterly earnings than patient care.

“I think the trend probably began in the early 1960s when physicians declined the opportunity to take an active role in the management of hospitals and health care,” Marr said. “Instead, they hired administrators to do that work and did not pay close attention to the results. That was just the beginning of the shift, though. Over time, the groundwork was laid for the practice of medicine to be controlled by the reimbursement polices of insurance companies and corporate business practices. Physicians lost control of the health care system and became managers of therapeutic teams.”

“Today there is a decreasing emphasis on self-sacrifice and individualism, and an increase in group practice or organizational medicine where hours are predictable,” Marr said. “You can’t necessarily blame young doctors for the decisions
they are making. It’s just been the natural progression of things.”

Marr said that until the profit motive is purged from medicine, any talk and action to improve the health-care system will be of little or no benefit.

He stated that there are barriers to the needed changes happening, though, such as:

• Health care as an industry comprises 18 percent of the gross domestic product. “No one will tamper with it for fear of uncomfortable or egregious economic fallout,” said Marr. “It could have been done during the formation of the Affordable Care Act, but it was not. In fact, the behavior of Congress during this charade demonstrates the difficulty of creating the changes that will make a better system for consumers. No politician will touch this.”

• There are far too many stakeholders in the current system to consider shutting it down or even to make large changes. Many industries support health-care organizations with day-to-day services and supplies. Other industries create, provide and manage the increasingly complex technology used in health care. Entire educational systems, from medical schools to community colleges that train lower-level technical and nursing staff, are engaged in supporting the system. The insurance industry that manages payments is an enormous employer that is itself responsible for driving up the cost of care, according to Marr. Finally, he stated that the individuals employed in all of the above are dependent upon the continued functioning of this “out-of-control creation” for their livelihoods.

All is not pessimistic in the world of medicine, according to Marr. Technological advances have helped both patients and doctors by providing the tools and knowledge to diagnose disease more accurately and treat it more efficiently.

So while some of the human touch in the doctor/patient relationship is gone, which Marr bemoaned, the importance of better patient outcomes shouldn’t be dismissed.

“Although I find a personal health-care visit to be a sterile interaction,” Marr said, “I cannot deny it is more efficient and more effective than
the medicine we practiced. Our model has gone and another has taken
its place.”