After five consecutive All-County seasons, this was a modest achievement by her standards. Still, being named an All-Conference player in the State University of New York Athletic Conference (SUNYAC) is nothing to scoff at. Samantha Trapasso, a 2010 graduate of Garden City high school, certainly left her mark on the SUNY Geneseo softball program. 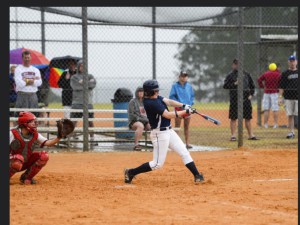 Samantha Trapasso swatting one of the record-setting
18 career homeruns she hit while attending SUNY Geneseo.

“It was definitely exciting,” said the senior infielder of her collegiate career with the Knights. “It was a lot of fun. There’s lot of stuff I’m proud of. I broke a bunch of school records,” she added.
The Knights first baseman comes from an athletic family. Her father played baseball and hockey growing up and her mother played softball. Now, she made a name for herself through her achievements on the diamond.
Trapasso, who was named First-Team All-Conference as a sophomore and junior, batted .362 with two home runs, nine runs scored, 20 RBI, nine walks, only five strikeouts and a .655 slugging percentage in 19 games this season.
Still, something left her less than satisfied with the results.
“I suffered a torn meniscus about one-quarter of the way through the season,” she said. “It happened during practice and it was too late to red-shirt,” she added. That is certainly a crushing blow to a player that is in their final season of competitive play and one that plays a vital role in the team’s success.
To “red-shirt” a player has the option of sitting out the season without exhausting a year of eligibility. As per the NCAA requirements, a player can only do this if you participate in less than one-third of the team’s games. Unfortunately for Samanatha, the injury occurred after that point.
With that being the case, Samantha came to bat in her final game.
“I just wanted to play,” she said. At that point there was no incentive to sit out, aside from avoiding the pain, of course.
“Oh yeah, it hurt,” she said. Trapasso sit was able to muster a hit in that game, showing her level of toughness.
Geneseo lost that game 5-4 in nine innings against SUNY Oneonta to end their season. In fact, both of their losses in the conference tournament were one-run losses. Nevertheless, Trapasso has a lot to be proud of.
She finishes her collegiate career with 18 home runs, the most in program history. Her record-breaking 17th home run was a two-run shot in the first inning of the Knights’ 2-0 victory over Cortland to open a doubleheader on April 11. A day later, her 18th home run was a three-run shot that capped a 3-5 performance with five RBIs to complete a doubleheader sweep of Oswego, 9-4.
During the 2013 season, Trapasso was named SUNYAC Player of the Week for the week of March 25. She batted .481 with three home runs and an astounding 1.074 slugging percentage. Defensively she did not commit an error in 31 chances during the eight-game stretch.
Trapasso also finished with the highest slugging percentage in program history (.678), while her 107 RBIs were one short of second place on the Knights’ career list. She also finished as the career leader in doubles (46) as well as in the Top 10 in total bases (2nd, 256), batting average (6th, .393), hits (6th, 150) and walks (9th, 38).
“I’m going to miss being successful on the field,” she said. “I’m also going to miss my teammates. I made a lot of close friendships during the years, I will keep in touch with them forever,” she added. Regardless of whether the goals were reached, Samantha knows that those are memories that will last a lifetime.
Now, the Spanish major will take on life in the real-world. She admits she doesn’t plan on pursuing a job with her degree, rather she would like to become a cop — something that is common in her family.
“I have a bunch of uncles that are cops and sergeants in the NYPD,” she said. Trapasso plans to begin taking the tests to expedite the process.