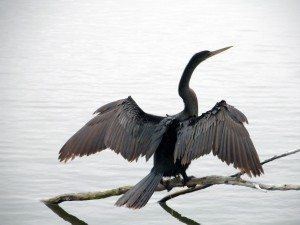 If it’s high flying baseball you crave and the Mets and Yankees just don’t do it for you, then you’re in luck. The Nassau Snowbirds of the All-Avian Baseball League (AABBL) are back from spring training in Sarasota Florida and ready to open their season. They begin with a home stand against the Pittsburgh Parrots, the Carolina Canaries and the home run happy league champion Rhode Island Wrens.

This year’s team is built on pitching and defense. If you’re not familiar with them, here’s a position by position introduction to your Snowbirds.

The prehistoric looking anhinga, nicknamed the “snake bird” or the “water turkey” takes fish underwater with a javelin-like bill. On first, it’s a ballerina spearing ground balls out of the dirt and gracefully stretching for errant throws. With that bill there’s no need to break in a first baseman’s mitt.

The pied-billed grebe is light, buoyant and dives easily. Ground balls don’t escape the infield on either side of him while rocket-like line drives are literally kidnapped in mid air by the bird nicknamed “Carolina grebe” or “water witch.” He’s the infield’s anchor and the unsung man on the double play.

Despite his youth the immature little blue heron is the most lithe and athletic bird on the team. It can stretch its neck and turn its body simultaneously in different directions and has great range. The throw to first is child’s play for this wary and patient rookie who is excellent on the frequent infield shifts and bunts. 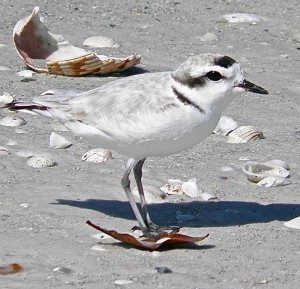 The “hot corner” needs a bird that can dive over the base line, backhand a whistling grounder and make the long throw to first base. The hooded merganser dives for fish with a bill that is serrated making it “sure handed.” This bird often begins life jumping out of a nest in a high tree within 24 hours and from day one, learns to judge distances, like the 90 feet from third to first from birth. He was born to play the position.

The magnificent frigatebird with a 7.5-foot wingspan sometimes steals fish from other birds in midair. Batters who think that their long flies will clear the outfield fence are known to stare into space after this guy leaps high and snares them. With his red pouch fully extended like a balloon during the breeding season to attract a mate, he’s the cover-boy on every Snowbirds home game program.

This bird has to cover mucho territory, needs to get a jump on the ball at the crack of the bat. Ever see how quickly the roseate spoonbill takes flight at the appearance of an unwanted human? Its Dixie-Cup shaped bill is a trap for balls. Any manager will sleep soundly with the “pink curlew” patrolling the outfield.

A small duck, the blue-winged teal, can spring into the air and “climb the fence” turning potential homers into outs. He chases down line drive hits before they go into the far corners of left field or carom off the wall for extra bases. A tireless paddler, he plays winter ball in South America and has his own cadre of fans self-named “the left outs,” who, after he makes a play, collectively let out a high thin “peeew” sound, imitating his call.

The American bittern is a golden brown and white streaked power pitcher. Standing still with its head and neck facing skyward, this guy is difficult to distinguish in a marshy background. Its best pitch is the “bloonk-adoonk” named after his song and the sound the ball makes when it hits the catcher’s mitt. Nicknamed “bog bull,” “stake driver,” or “thunder pump,” it’s a short inning when he’s on the mound.

The black vulture with its pebbly gray head looks like a medieval executioner. Aggressive around the kill, it is also silent and sullen around the plate occasionally hissing and grunting on the rare occasions that the pitcher shakes off his sign. Daring base runners pause before trying to steal on him. A late riser, the “black buzzard” prefers night games but he’s a high flier on the urban night life scene when there’s no next day game.

The yellow-crowned night-heron often comes in with birds on base in late inning rallies needing to face the heart of the order. The bird nicknamed “arsenicker” gets batters attention immediately by pounding the ball into its glove with its thick bill, like it’s pulverizing a crab. A student of the game it spends hours watching video as it patiently waits for crabs, a favorite food, on off days.

With a small lead in the ninth inning, the herring gull comes in to close out the game. It’s sheer size, 25-inches and 58-inch wing span get batters attention quickly as he stares down at them from the mound. After the last out he leads fans in a bugle-like rendition of “Good Night Irene” which some suspect may be his girlfriend.

The snowy plover is a ghost on the basepaths. As light colored as the sand, he’s difficult to see. When running, this guy has the speed of a sewing machine needle and when he stops, it is as if he’s vanished. This puts a new spin on “small ball.”

Here experience counts. The pelican goes back in the fossil record some 30-million years making the brown pelican a very savvy manager. With a pouch that holds over 2 1/2 gallons the bird can chew a lot of bubble gum or sunflower seeds mulling over a strategic decision.

Home games are played at Stillwell Woodwoods County Park in Woodbury. Admission is free and on Fan Appreciation days the first 25 arrivals receive a complementary bag of organic bird seed. See ya at the opener.